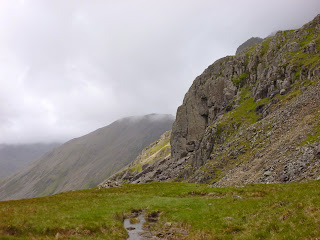 Kern Knotts and the stat of the Climber's Traverse 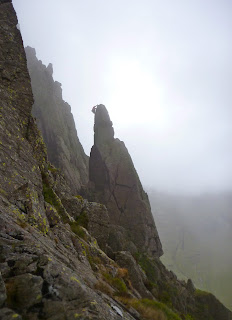 Cold and windy on the Needle 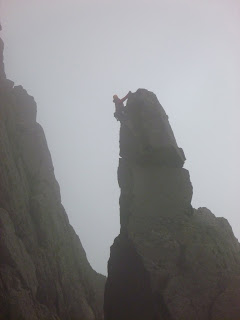 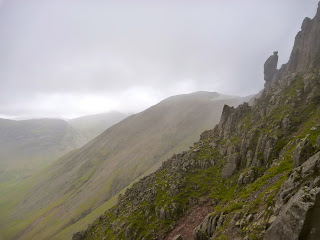 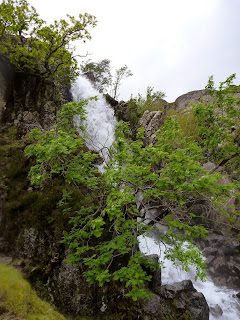 Anyone who followed the blog over the winter will probably remember that I tore my achilles back in February. Toss in the broken ankle 18 months ago and various other old injuries and I’ve been walking like a 60 year old rather than a 40 year old. A friend recommended I speak to her mother- Sue Read of Working Bodies in Keswick. Sue is a sports massage specialist, practising and teaching it to others and I booked an appointment with her. She duly went to work probing and kneading at my lower limbs. She was soon identifying knots and lumps of scar tissue that reminded me of incidents and injuires I’d forgotten going back to achilles injuries from running on soft sand as a 9 year old! An hours workover served to begin to break down some of the scar tissue (although apparently things are a real mess and there is not much healthy stuff down there).

On my current trip to the Lakes Sue invited me to bring Jane along so that she could learn to help identify and treat my leg issues. Great…. Now whenever I’ve annoyed Jane she can just flex her knuckles and tell me its massage time… given that we are aiming for 7-8 on a pain scale of 10 its not an entirely pleasant process!

The proof is in the pudding though. After Jane and Sue loosened off my calves, quads and IT bands yesterday I went for a wee 12k run over Latrigg and felt stiff and slow but given that a couple of weeks ago my achilles were screaming at the thought of me jogging that’s an improvement.

Today I went a little further: I was dropped with the bike at Seathwaite and went on foot up to Styhead Tarn, round the Climber’s Traverse to the Napes and threaded the Needle. There was a cold wind and the rock was very greasey as a climber on the Needle posed for a photographer in between blowing on his fingers and waving his arms to stave off the hot aches. I climbed Arrowhead Ridge and carried on over Westmoreland Crags to the top of Great Cable, then it was down to the col and up Green Gable and onwards to drop down beneath Gillercombe Buttress and down the Sourmilk Ghyll path.

I recovered the bike and headed for Seatoller and the dreaded pull up the first part of Honnister Pass. The reward is the great single track around and down into Grange. Had a first here as I broke my chain. TCL Training came in useful as I whipped out my chain tool and spare links and was on my way in 15 mins. I carried on up the west side of Derwentwater on the undulating bridleways forming part of the coast to coast route and round into Keswick 5 hours from being dropped off. Safe to say the legs are working better than they were. Cheers Sue!

If anyone wants her contact details just drop me an email. If you need advice on prevention, treatment or rehabilitation of a muscular or skeletal injury you wouldn’t regret it.

Hi! Do you know if they make any plugins to assist with Search
Engine Optimization? I'm trying to get my blog to rank for some targeted keywords but I'm not seeing very good
gains. If you know of any please share. Kudos!
Also see my site: cheap reborns

Hey There. I found your blog using msn. This is a very well written article.
I will make sure to bookmark it and return to read more of your
useful information. Thanks for the post. I will certainly comeback.
My web site fantasy scifi

Please let me know if you're looking for a article writer for your blog. You have some really great articles and I believe I would be a good asset. If you ever want to take some of the load off, I'd love
to write some content for your blog in exchange for a link back to mine.

Please blast me an email if interested. Thank you!
My weblog :: OnlyCruiser.com

Very shortly this web site will be famous amid all blogging and site-building users, due to it's nice posts
Also visit my blog post :: visit this website

We're a group of volunteers and starting a new scheme in our community. Your site offered us with valuable info to work on. You've done an impressive job and our entire community will
be thankful to you.

you're actually a excellent webmaster. The website loading pace is amazing. It kind of feels that you are doing any distinctive trick. Furthermore, The contents are masterwork. you've done a wonderful
task in this topic!

Loved to read your blog. I would like to suggest you that traffic show essay writing service reviews most people read blogs on Mondays. So it should encourage blogger to write new write ups over the weekend primarily.

Positive webpage, where did u think of the data on this posting?I have perused a couple of the articles on your site now, and I truly like your style. You rock and please keep up the powerful work.
australian writing essay

An author who is writing in a descriptive way climbs inside a topic and shows readers what’s going on, rather than simply telling them. Although this is a technique that is often used in creative writing, it is important to learn how to write more descriptively when approaching any type of writing.
http://whazzup-u.com/profile/FlossieJansson