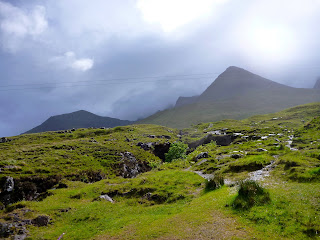 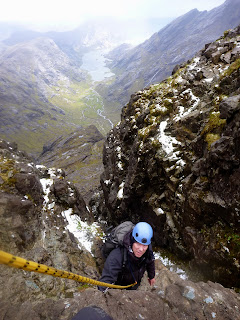 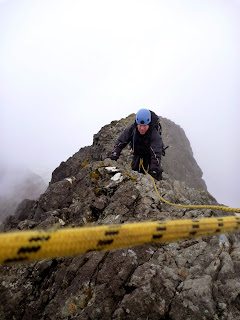 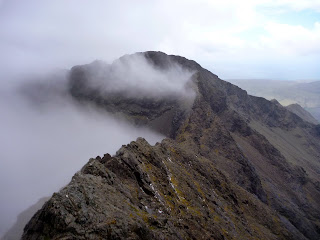 Just spent a couple of days on Sky with returning client Mark. We drove up from Edinburgh on Monday past 3 overturned lorries and a lane of the M90 blocked by downed trees... not a great start.
Tuesday and it's bright and showery and we can see patches of hail lying on the ridge. We headed up through the coire to An Dorus along with Mike (always encouraging when a local has the same idea). The hail showers were heavy and wild but short lived and at least we had a view in between them. It's a short hop to the summit of Sgurr a' Mhadaidh from the deep gash of An Dorus. We retraced our steps and headed for the summit of Sgurr a' Grheadaidh next. We decided to take a look at the route to Sgurr Thormaid and pressed on along the excellent scrambling of the knife edge ridge. We had passed the hardest and most interesting ground when we began dropping down from the South top but here the wind got seriously strong. Standing up was hard and our faces were vibrating and wobbling like jelly in the severe gales and it was time to retrace our steps over both tops of Ghreadaidh and head for a well earned shower and a meal. The forecast for today was heavy rain but appeared to show the wind holding off until late in the day. This tempted us onto the W Ridge of Sgurr Dearg heading for the Inaccessible Pinnacle. The rain flew like bullets into our faces and as we crested the ridge the gales got seriously strong. By the time we hit the 750m contour Mark had been knocked down 3 times and we were both struggling to make any upwards progress. We beat a retreat leaving the Inn Pin for another day in the increasing rain. I think we'll call that a 1 all draw, Mark and Al 1, Skye 1.
Posted by Alan at 20:56

Remarkably, my brother found this before I did as, unbeknown to me, he reads your blog everyday. One of your many admirers. And the git had better weather than me last week!

Bitterly disappointed about the winds as I loved being on the ridge that first day. I've upped the training for the Alps and I'll be back at some stage to crack this one. Will be in touch.

Ha, love the vid Mark. The weather was a sod :-(
Another time man.

Matterhorn was also cancelled, Alan ... Not my year for weather. Rob was great though and I did him a video for his site. Cheers M

I have attended the camps twice but refused to go such a dangerous adventure of dissertation writing help in which you are doing at the risk of your life and students like it a lot but I advise them that they must first complete their studies and then go for the adventures.