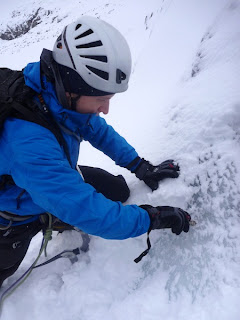 Jakub building the first belay in the Gulch 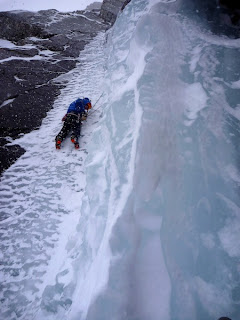 The other team on the start of Gemini 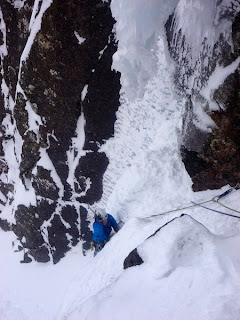 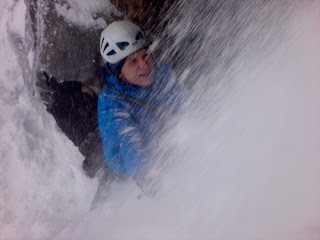 That's a lot of snow! 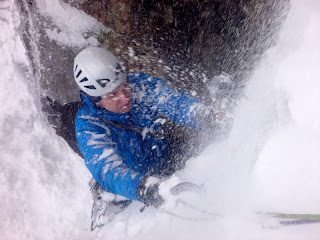 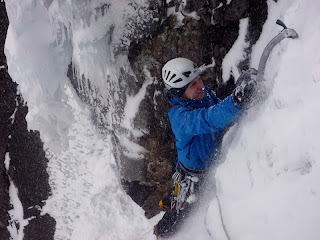 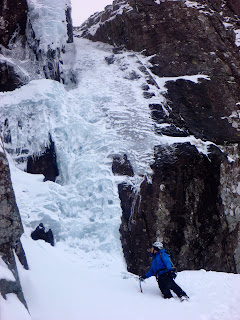 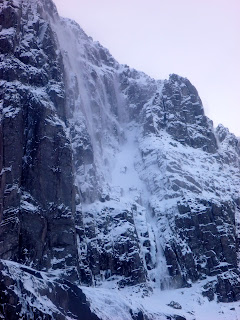 Where the snow was coming from. Waves of spindrift from high above funnelled into our Gully

Today Jakub came back for 3 days winter climbing with me. Last night's heavy snowfall made the hill feel a far less friendly place than of late. There were those making good decisions (not happy with the snow around Fawlty Towers, and another team walking away from Vanishing) and those questing on bravely (?) into Observatory Gully. I told the team from Fawlty Towers that its possible to Ab the first pitch of Waterfall Gully and they headed that way (this wasn't entirely altruistic as I planned to go there later and hoped they'd have dug some of the snow off!).
We started at the Gulch and after some digging found the ice still present and Jakub got 3 pitches of increasing difficulty before we headed round the corner. The 2 lads had cleaned Waterfall Gully's first pitch nicely and were now playing on the bottom of Gemini. As they finished and abseiled off we cracked on with Waterfall. It's had a lot of attention and was hooked and stepped but it has been so chopped up that in places the bulges were overhanging but positive making for good sport. I reached the in situ belay and brought Jakub up. Then the snow began... a torrent of snow pouring down the Gully from above. It wasn't touching either of us- I was clear on the belay on one side and Jakub was tucked in on the other- but it was a few minutes before he could cross to me. We retreated between these mini avalanches.
Walking out we could see the cause. Waves of spindrift were blowing from the crest of Ledge Route into the funnel above our pitch and pouring down it. A similar thing was happening all down the west side of Tower Ridge with the snow completely obscuring Garadh Gully from the Hut.

There is a lot of snow sitting in places out there. Its not last week any more folks so have a safe weekend!
Posted by Alan at 21:23