Dragons, Chimeras and the Pivot-some great gear by DMM 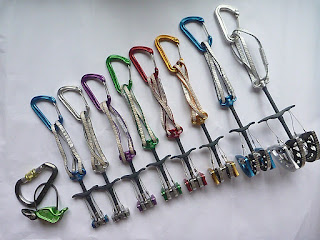 DMM delights-the Pivot belay device and new Dragons 00 to 6
I've always been a fan of DMM kit since my first set of Wallnuts and I both like the idea of supporting a British company that makes great kit and appreciate the partnership that AMI have with them. So I've been using some of their newer kit now for a while and thought I'd report back on the story so far...
I've been trying out the new DMM Dragons recently in Scotland. I was working with 2 AMI Trainees in Glen Nevis this week and one of them owns the older Dragons and the other is looking at buying a new set of cams and was keen to 'try before she buys'.
The difference between old and new is obvious and even without his own older ones for comparison Alex commented on how they look more "substantial" DMM have widened the cam lobes at the sweet spot along with a machined finish and some grooves. All of this is designed to give them an increased 'girpability' in soft or slippery rock types like limestone or slightly flaring cracks. Certainly from the look and feel of them Alex felt they gave a sense of reassuring of reliability. The weight has gone up a tiny bit (old 2,3,4 weighed 373g, the same 3 new cams 399g) but at only 8 or 9g for each large cam this is still offset for me by the doubled sling and weight saving in extenders. 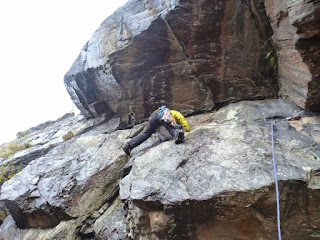 Jess trying before buying. A new Dragon fully extended and with a quickdraw to ease the change in direction at the start of a traverse
The other thing we picked up on was the new reduced sling profile. A change in the stitching means an easier draw through on the double sling, great for those 'must clip it quick' moments.
We had them racked on the Chimera karabiners and these were my own discovery having not used them before. I racked my old Dragons on Phantoms for the weight saving but the clean nose and handling of the Chimeras (almost as light- only 12 grams in it over 6 cams on my harness) has me convinced now. 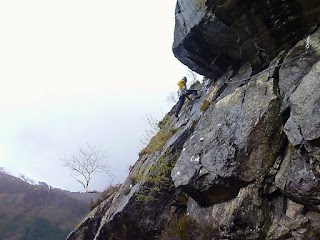 Another new Dragon under the roof and again the easy extension of the sling is keeping the ropes running nicely
Yesterday my mate Jon and I took the mountain bikes for a rough ride up Glen Gour to Indian slabs. This immaculate sweep of gneiss harbours some lovely long routes at about VS with poor gear so we took the Dragons for another workout. We climbed Indian Slab, 5 long pitches of run out padding where often the only good protection was a cam in a slot or horizontal break. Again Jon picked up on the reduced profile of the stitching compared to the older Dragons and how much easier they were to manipulate. 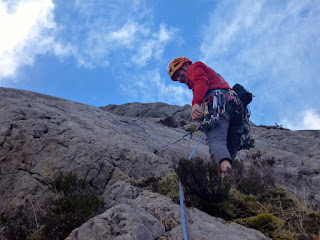 Jon about to launch onto another sweep of slab with the set of new Dragons to keep him safe
Next up we made an early ascent of a more recent addition to the crag- Crazy Horse an HVS higher up the hill. Protection was really poor and the Dragons were often the best thing going, even on only 3 cams, so the increased lobes and grippier surface were at the forefront of my mind!
Take a look at a comparison of different brand 2016 cams here. 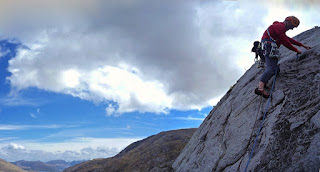 7 pitches and 400m of ascent and glad of the weight saved by the extendable slings
My new Pivot belay device has been getting a good workout too. From catching falls indoors to use in guide mode outside its been impressing me. On the day out with MIA Trainees Jess and Alex we were using an older, fatter pair of ropes and the other type of plate in the party was struggling to allow them to be taken in in guide mode- no problem for the pivot though and another item for Jess's shopping  list.
Its not just at the wider end of things that it works well though. Down in the Lake District a couple of weeks ago I was using one with a pair of much thinner ropes where it exhibited equal control as well as ease when taking in in guide mode. 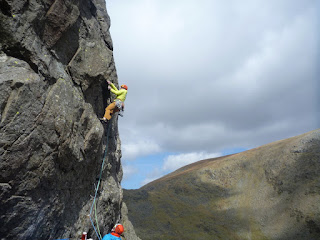 A steep start to Andy's rock season and it helps to know your belayer has a device which works with these ropes
In the past at work I've had to select which type of plate to use carefully depending on the rope/s I was planning to take out and whilst its still important to match a plate to the correct diameters I'm not alone in finding the Pivot to be a great all rounder so far. 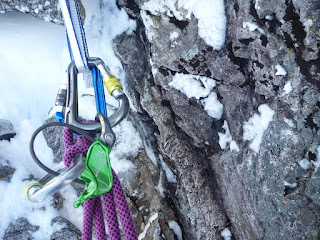 The Pivot paired with a Rhino Krab doing its think on Tower Ridge this winter
"So far, so good... so what?" as a mountaineering partner of mine would often say. So far so good. I haven't really found any dislikes with the new Dragons, the Chimeras and the Pivot but the summer is young. Lets see how they perform over a longer period- in particular the Pivot as some belay devices do seem to wear and develop edges quite quickly. I'll abuse the gear and see what happens. 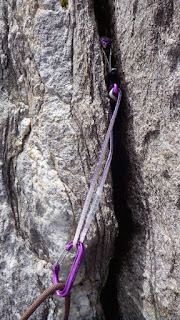