Spartan Slab was my first ever VS and is still a real favourite climb of mine. Today Gill and I went to climb it but it wasn't looking its best. Big wet streaks, water trickling over overlaps and the white scar of the big rockfall on the first pitch visible some way off. I led pitch one and traversed across where I usually do towards the scar. Big mistake! I ended up in the groove the rock fell out of, feet pedaling on loose gravel and my last runner about 20ft away horizontally. When Gill came up she managed a higher line (which also has runners). After the first step down and right she climbed up to continue the traverse level with the first belay ledge. 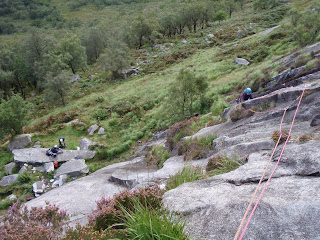 Then Gill led the second pitch despite the first 20ft running with water. 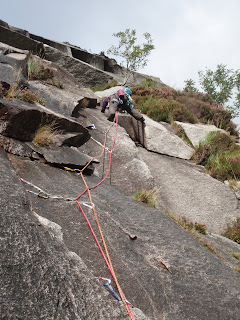 The overlap was mine and felt straightforwards but the hand traverse was sopping. 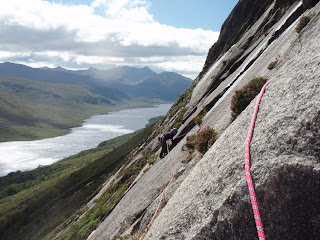 The fourth pitch holds some long reaches (Gills not the tallest) and the last 10m to the belay were again rather wet. I led the last pitch feeling a bit like I was in roller skates as my feet kept slipping on what should be good smears when dry. We were both quite relieved to reach the top and slither down the descent path... a baptism of fire (or should I say water) for my return to rock climbing after almost 6 weeks.
Today doesn't really compare with the superb climbing televised in Scotland live yesterday. Dave MacLeod's and Tim Emmet's first ascent of 'The Usual Suspects' was a great demonstration of skill, determination and commitment. Dave's lead of the crux scond pitch was phenomenal but I was more tense watching Tim lead the traverse and the sopping wet final pitch/ Available on iplayer for those who missed it: http://beta.bbc.co.uk/iplayer/episode/b00ts470/The_Great_Climb/
Posted by Alan at 20:04