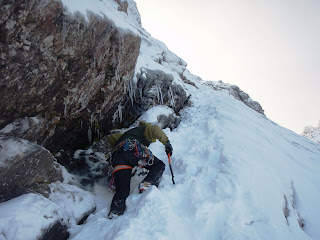 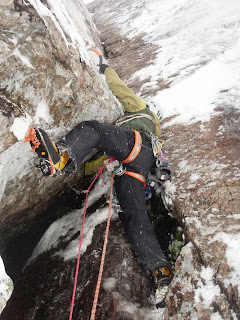 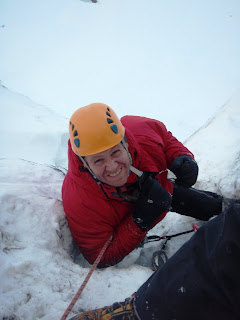 Hot Aches at top of Pitch 2 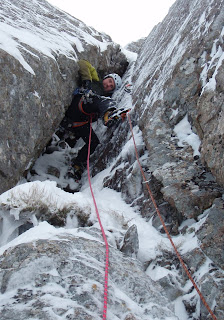 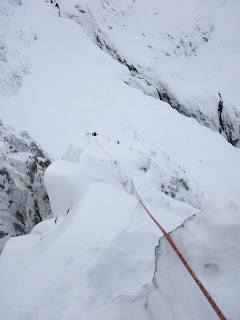 Snow covered Sw Ridge of Douglas Boulder
There is nothing like breaking in gently to the winter with a few easy routes to warm up..... or so I'm told. Kenny was keen to jump in at the deep end today and we went to Cutlass VI,7 on the Douglas Boulder on Ben Nevis. It was a lovely morning with alpenglow visible on distant hillsides. There was plenty of snow around and ice to a low level. We saw evidence of powder snow sloughs below No. 2 Gully and both almost fell over on the ice from the frozen splashes from the standpipe outside the CIC hut.
There was a good trail broken right to Cutlass as someone else obviously did it at the weekend. This also meant that the steep corner had one wall 'hoovered' clean of snow (we discovered why as we too leant heavily on that side). We soloed up the first pitch and Kenny led me up the steep corner pitches on well iced hooks in the crack at the back of the corner. It got warmer as we went up. The steep walls were verglassed and the exposed turf was well frozen, however the stuff on the large ledges was well buried under a foot of powder . Having been better insulated it was also more suspect. We both had a hook rip on us on pitch 2 but held on to make the belay on the SW Ridge with no rests or falls.
From here I took us up the last 70 odd metres to the abseil tat atop the Boulder. The ridge was absolutely plastered and there was an awful lot of digging to get down to rock and find something to hook or stand on!
There was also a team making slow progress over on Slab Route but as we came off the hill the forecast was spot on as snow showers appeared behind us. Nick and Gill climbed Castle Ridge finding it hard and time consuming under very deep powder.
Over in the Cairngorms Jamie B was on a snowy Fingers Ridge and saw someone ride a small avalanche out of Goat Track Gully and to the base of the Coire without apparent serious injury. Plenty of snow out there and plenty more to come on strong winds take care folks.

Breaking in gentley is never a good idea. Start on the hardest thing you can and if you have an epic it's justified. Have an epic on an easy route and your confidence is knocked for a while.

Hmmm, you could be right mate. I believe the onset of hot aches can be exacerbated by dehydration. Given the socialising of the last few days that may explain the look on my face today!