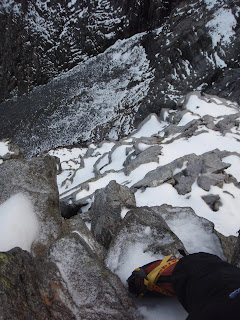 Looking down the side of the Great Tower 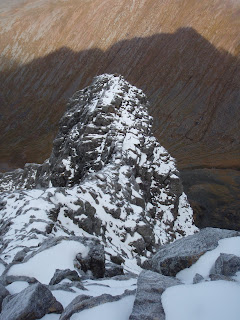 Looking back down Tower Ridge from the top 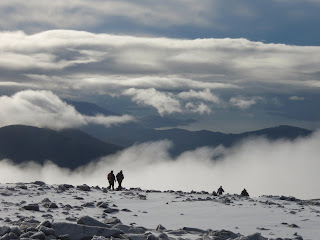 On the plateau of Ben Nevis 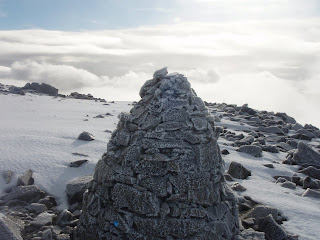 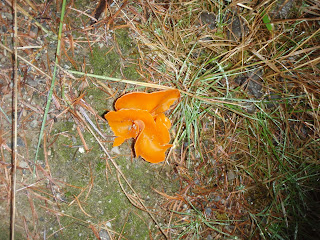 The dusting of snow that was sitting on the Ben all of last week looked severely depleted by yesterday's warmer rain by this morning. Nonetheless I packed crampons and an axe this morning before heading to Tower Ridge. The north face was quiet as I made my way up from Torlundy and other than deer I saw only a single walker filling up at the stand pipe at the CIC Hut. There was ice on the puddles from the carpark all the way to the hut and verglas in evidence from the base of the ridge. All of the seeps and weeps caused by yesterdays rain and thaw had frozen last night leaving a lot of thin water ice on steeper surfaces or in hollows. Above the chimney on the ridge it was ovious that there had been a little precipitation after it coolled down last night as a very fine dusting of snow crystals rounded things out to make sure that just about every surface was slippery and insecure. Half way up the Little Tower the ledges were covered in much thicker snow (2 or 3 inches). This stuff has been through a good thaw and refreeze and was good for kicking steps in but a little higher and there was grey ice underneath it so the crmpons went on. The snow was firm enough to take a swing or two of the axe and deep enough to reduce a couple of what are usually high steps to much easier ones. By the eastern traverse there were thick icicles amongst the frozen weeps and a foot of firm refozen snow on the path. The climb up onto the side of the Great Tower was particularily slick and delicate and the step down into Tower Gap no better. However it was only a little higher, on the last 50m to the plateau that the rocks were properly rimed up.
Otherwise Carn Dearg was predictably less wintery in nature. No. 2 and 3 Gullys were remarkably complete looking above the coire (if you could be bothered flogging up the loose slippery screes below), as was Tower Gully.
I was feeling good vibrations for the coming winter!

Great pics Alan, really like the one showing your boot by the sheer drop down Tower.

Cheers Fly, when your on your own it seems to be a good way to give it some perspective.
Al