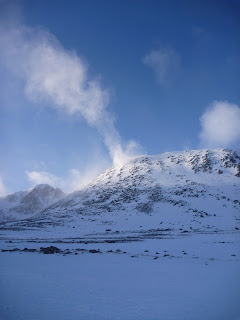 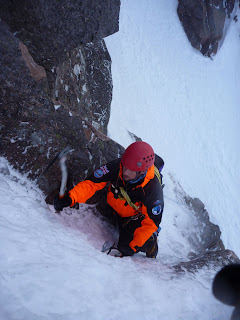 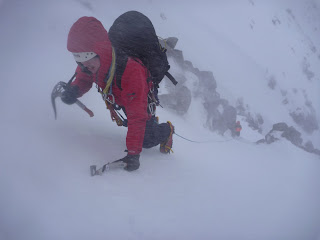 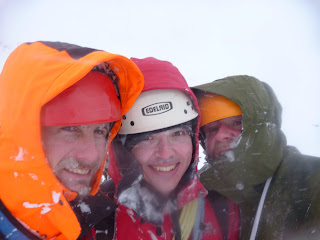 Day 4 of the Glenmore Lodge Intro. to Winter Climbing Course and the weather began sunny with high winds higher up and lots of obvious blown snow streaming off of the Fiacaill Ridge and whirling 'snow devils' visible.
We headed for the scoured side of the Coire to the Mess of Pottage. We watched a team ascending Jacob's Ladder, out onto the Slant and to the base of Hidden Chimney with about 15ft of rope between them and no runners. On the hard snow there today the rope seemed pretty pointless. This isn't 'moving together' or 'simul climbing' - both of which involve runners. It's not short roping where the rope is used to prevent a slip turning into anything more serious on mountaineering ground (involving the use of appropriate defensive movement, braced stances and quick belays of various types). This has sometimes been dubbed 'death roping'- 2 or more people climbing simultaneously on ground where a slip could result in a fall and where one person falling would pull other attached to them off. IF climbers feel the need to move that quickly then they should either solo or place runners on serious ground. Rant over.
The guys led me up Jacob's Left Edge in 4 pitches and it was only on the last pitch that the weather turned. On the plateau we were staggering around in a whiteout so we quickly located 'windy col' and I lowered the guys over the edge. Lower down it was a bit calmer so we dug a bollard and made an abseil. On the coire floor we headed to a convenient and oft used boulder to look at placing pegs.
Now the wind and snow was getting pretty serious so we turned and headed out with all speed. It was a good job too as the weather turned 'biblical in proportion. A Lodge team coming out assisted a large group in the car park when their minibus door was torn off!
Been a bit busy around here tonight and I've sprained my ankle pretty badly in a snow covered drain on the walkout. Video of conditions tomorrow.
Posted by Alan at 20:56