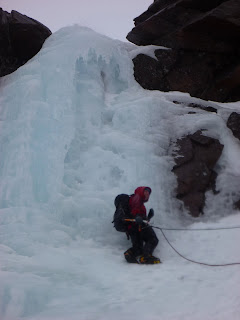 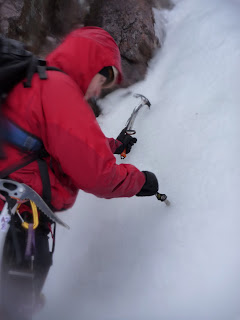 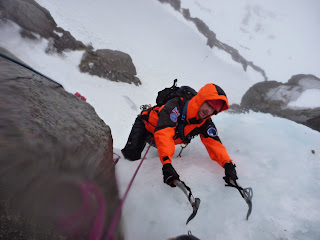 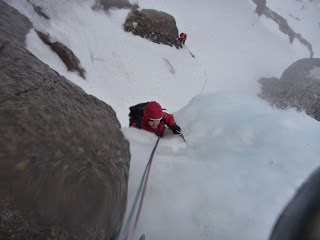 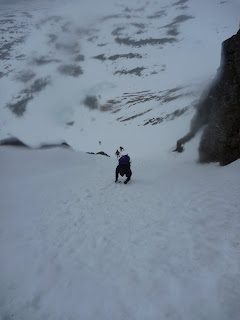 A wild and wet start at Glenmore Lodge this morning saw many groups starting their day around the centre. Tom, David and I made use of a couple of hours on the drytooling wall to look at mixed climbing techniques and the big tree to simulate ice climbing. We finished up with a couple of things I'd promised to show Tom about belay building before heading up the hill.
Walking in to Coire an t Sneachda it was raining but not as windy as we had expected- funnily enough there were few teams around today. Colin and I both took our teams for a quick look at Aladdin's Mirror Direct. It's still fat but at the very top there is a hole allowing the water streaming down the base of the gully above to pour over the route. My team found some ice to look at ice screw placement and abalakov threads. Meanwhile with Colin at his first runner and unable to look up into the downpour his 2 students decided that a quick trip up the Mirror itself was more appealing- very sensible. When I reached the same position David expressed a desire to give it a go and Tom just nodded apprehensively. I zipped up my hood (and, as a friend would say 'my man suit') and prepared for a short, steep soaking. The ice was chewy and accepted screws well and soon I was on top at the fixed anchor. First David and then Tom made short work of the falls and after lowering them I abseiled off retrieving my screws on the way. Conveniently Colin and co. were just abseiling out of the Mirror so together we decided we were wet enough and beat a retreat for tea and medals (and a change of underwear- mine was a bit soggy, and cake- scone day at the Lodge today, mmmmmmm). Snowing and blowing again on the way out.

http://mitchalbom.com/d/journalism/2546/going-so-fast-gone-too-soon http://www.sanduskyregister.com/registercam
buy facebook likes buy facebook likes facebook likes
i have windows vista and my computer is fairly new. i don't have viruses (but i am prone to them) what can i do to get the computer going quick. i don't want anything to install because when my mom sees them, she gets fussy.