Ok I have a serious case of man flu. My head is ready to explode and my wife... who is due to give birth at any moment is trying to look after me!!
By this afternoon the sunshine was calling again and Jane's dad Robin and I paid a quick visit to a warm and sweaty Glen Nevis (thank god there was a little breeze to stave off the midge).
We climbed with bags to save going back down after each route and nipped up Pinnacle Ridge and then Resurrection (Robin did well leading and seconding with a rucksack and wearing shoes 2 sizes too large with thick socks). I then took the opportunity to visit (ok I tricked Robin into walking up to) the one of the  less popular crags in the Glen; Blacks Buttress. The rock looks great but the crag was still weeping and with time pressing we headed back down towards a phone signal to see if Jane was in labour (not yet) pausing for me to lead SW Diagonal. I've been planning to try this obvious line for ages but never seemed to have dry weather, a partner and to be in The Alp when not working. Its just as polished as it looks, there are just enough positive holds amongst the slopers and the footholds are real thin. A great route to try on a hot sweaty evening (not). Much chalk accompanied dripping nose and hacking cough on the ascent.
Well done to the lass who was with (presumably) her boyfriend on her first climb today. The whoop of excitement resounded around the Alp as she topped out. Whether the bloke lasts or not hope she has plenty more climbs that give her cause to make a noise like that in the future. 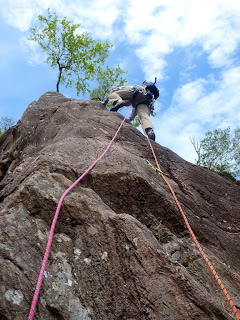 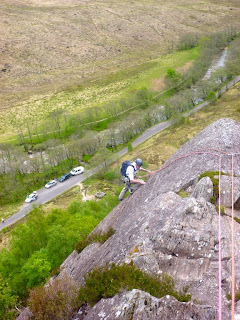 And topping out on pitch 2 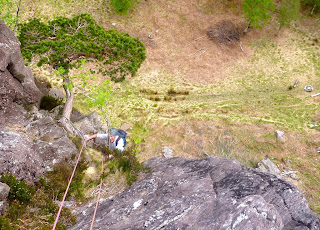 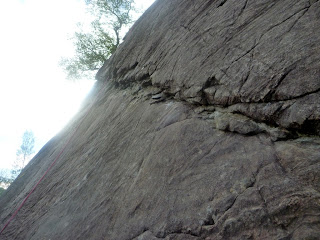 Finally take a look at Ang Kaji Sherpa's pic (he's part of the team who fixed the ropes and made the first ascent of the season) of the chaotic massed ascent of Everest the other day. Respect to those determined enough to make the summit, RIP to those who didn't come down... but you can keep it. I'd rather go climbing (and if I had that kind of money I could do 5 really interesting trips). 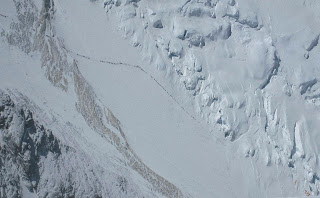