A big day out before the thaw

I spent the weekend visiting family in Huntly and going to the Nordic Skiing open day at the dry track there- always good for a workout. On the way back west I dossed with a friend in Aviemore and met Keith and Tim from PYB who had been on the upper tier of Carn Etchachan reporting pretty good conditions. This turned out to be enough to tempt my partner Jamie B away from the fleshpots of the Northern Coires and so 7am saw us leaving the carpark for the long walk over the back.
After a lot of loose boulders covered in powder, one wet foot and one wet glove when the ice collapsed on a stream and general early season puffing and sweating we were at the foot of Castlegates Gully eyeing Castle wall; a 1 star 210m IV,5 that Jamie liked the look of. We'd followed tracks much of the way and there was a team already in situ on the chimney of Route Major so we decided to crack on.
The route was fine, turf mostly good, a bit of clearing and Jamie led a fairly sustained 60m pitch to start off, nice only slightly tenuous climbing. Next I began up a nice steep juggy groove and then that was it. The rest was much easier, a bit like Golden Oldy on Aonach Mor. My pitch stretched the 60m rope to the belay and a third easy pitch using all the rope from Jamie put us on the lip of the Coire. The weather was less pleasant now, it was white enough for the map and compass to be used to get us the the top of the Goat Track and the walk up Coire Domhain was proper Cairngorm weather with the wind blowing freezing rain at us hard enough to make us stop and turn away in the worst gusts. 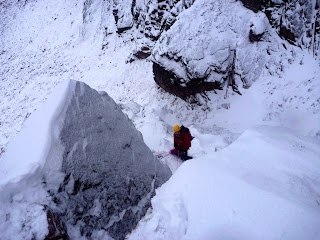 Looking down the last of the difficulties 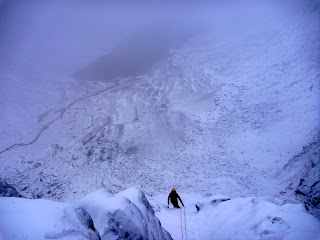 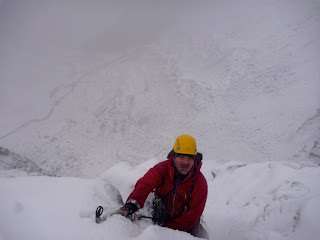 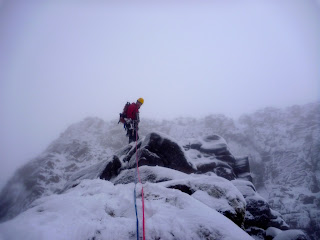 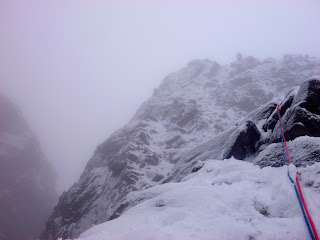 Topping out
It was stiller, mild and sauna like as we dropped into Sneachda a sign of todays thaw to come. We bumped into Mark and Gordon (well done on following your first pitch of Tech 6 Gordon!) in the car park who had had a good day on the Message and my Facebook is alive with pictures of happy early season winter climbers. How mild it will be before it goes cold remains to be seen but the season is off with a bang!
Posted by Alan at 10:25