After last night's snow this is what we woke up to in Corpach today... 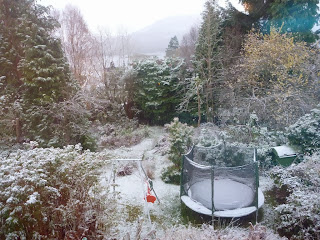 So I went to Ben Nevis and gasped my way up from Torlundy to the dam car park on the bike... 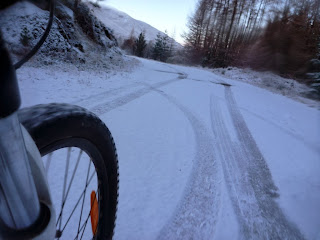 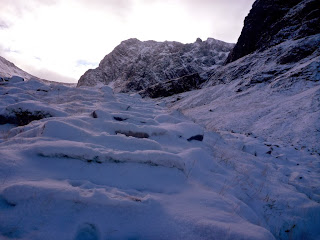 There is plenty of fresh and some consolidated snow too. Around the base of No.5 Gully is some firm frozen snow and some avalanche debris from the thaw that was part of the cycle that stabilised it. The powder still means you can pop through a hole unexpectedly and I was cursing some deep drifts. 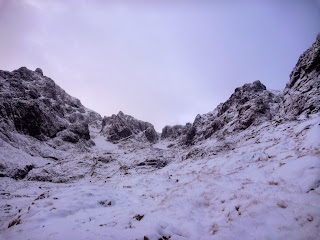 Looking up in the Ciste there is still a rocky step visible in No. 2 but 3 is complete with soft cornices above it. The turf was not frozen and there was water running fast from the Ciste Lochain, behind the icicles on the walls at the base of Ledge Route and under the snow where it cuts back left after leaving No.5 Gully. 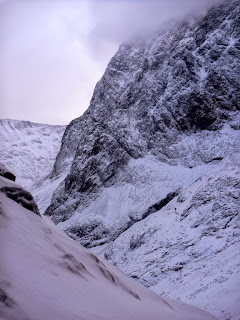 There was a pair on The SE Ridge of the Douglas Boulder (Direct Start rather than the guidebook one) so I suspect there will be less turf on that now than there was this morning as it was pretty mushy everywhere I went. Its looking cool for a few days so it may improve by the weekend? 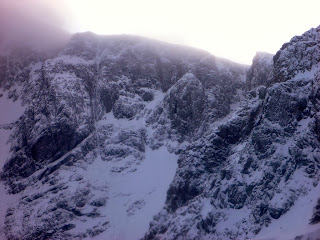 From about 1000m up there was a little rime on exposed NW facing rocks on Ledge Route.

If the predicted winds come tomorrow a lot of that snow and some more will be redistributed into gullys and hollows and there is a firm base in places so watch out for slides folks!
UPDATE Kenny climbed Slab Climb today and said the turf wasn't too bad. On steeper ground there has probably been less snow lying to insulate it so it may well be better on that type of ground.
Posted by Alan at 17:13

Those are some beautiful photos... Dont know why you think there is not enough snow...