An old and bold slab climb 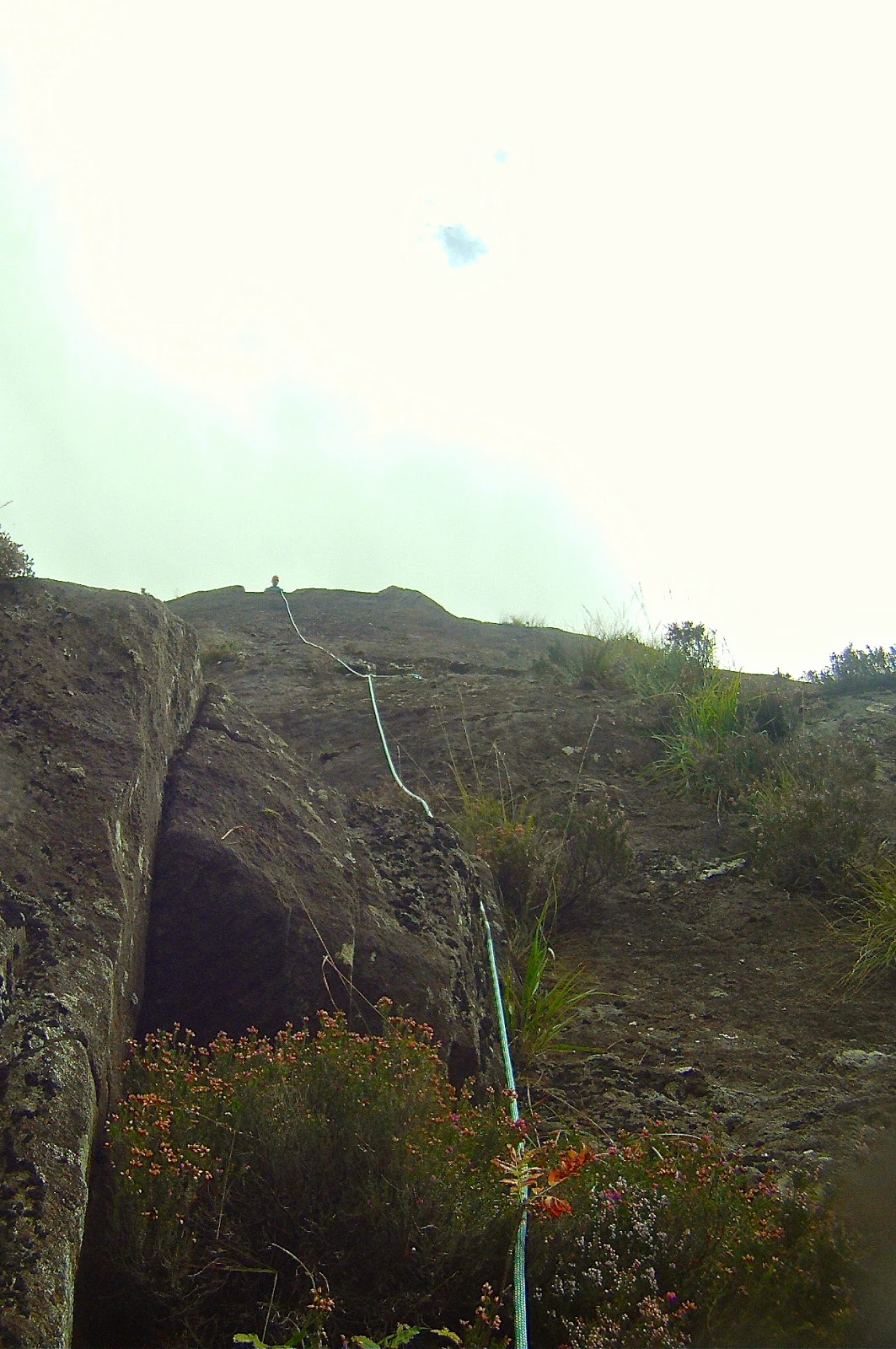 Stretcher Lower the gear is half way up
Sometimes work and family combine to mean that It feels like a while since I've had the pleasure of a little cragging with a mate. Rich and I went to Scimitar buttress at Polldubh today. The 2 VS's and the VDiff here are probably less often climbed than any other roadside routes of the grade there and are much steeper than most climbs at my local crag. On the walk up to them I mentioned the obvious slab on the crag just before you reach the main buttress and on our way down (not having a guidebook with us) we went for a look.
It looked straightforwards enough but not long on gear, a little overlap at mid height offering the best opportunity. We found a belay at the bottom and I launched up from a good cam placement excavated near where I left a Smidgey Rich in the buggy bracken.
Its a nice rough slab of schist and lower down there are a couple of horizontal crack lines offering reassuring holds. Standing on one of these I wiggled in what Rich described as 'convincing' gear under the overlap (a small brass offset and a walnut 2) before proceeding. Moss and lichen seem to grow on the same small scallops I wanted for my feet and nearby there was only one more horizontal feature before the top. Stopping I tarried in a dalliance with an inconstant crack. I looked with my head cocked at Rich's smallest cam now decidedly unconvincing. 'It might pop out under its own weight' I said and as I turned back to the rock it it did.
Onwards then. The whole slab is only 20m of climbing but the top 10 rear up a little with have no gear just increasing moss and dusty crusty lichens. I pushed the thoughts of 'what if it gets harder' to the back of my mind and concentrated on holds and moving as smoothly as my creaky knees allow. Almost topping out and I ask Rich for a little encouragement 'Say something nice Rich!'
'…..Ummm…. your bum looks good from here….' half heard over my final breath to easier ground
'You what?!'
Rich has a strange way of psyching his partner up.

No belay but a good rolling edge on Scimitar Ridge. He topped out to my raised eyebrows 'VS4a?'
'I was thinking HVS4a!' he comes back with.
We reckoned it easy but 'interesting' the climbers codeword for 'you will be scared'.

Highland Outcrops mentions Stretcher Lower VS4c 1969 on that slab. Standards have obviously increased- if only in terms of rock shoes- but they must have been more used to climbing without any gear!
Here's Rich climbing it at x2 speed