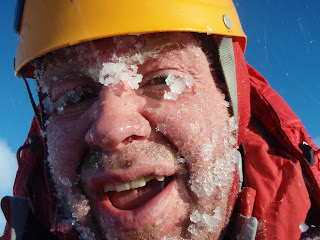 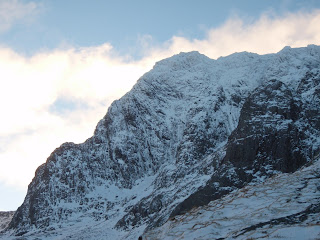 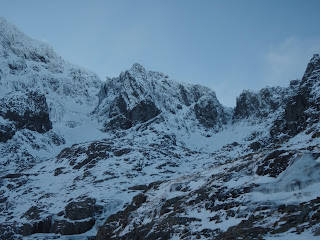 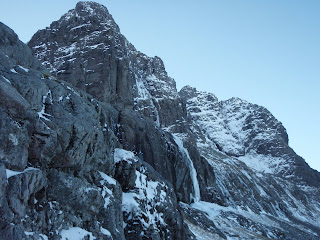 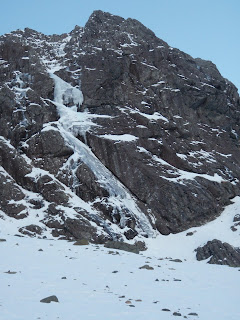 Rich and I walked up from Torlundy heading for Gargoyle Wall. This has become so popular that we might have used a little more imagination but neither of us have done it and it is mid week. We were beaten by another team and standing in No.3 Gully there was a bitter wind and even wearing all our clothes and belay jackets it was too cold to wait. So.... we went around the corner into Winter Chimney hoping to escape the wind and ignoring the guidebook advice that it is a good LATE season ICE route. 30 minutes later Rich is being blinded as at every step he has to clear a foot of crud which is blown back up into his face and I'm thinking that I've never been this cold in Scotland.... ever.... and knowing that the only thing worse than shivering this uncontraollably would be not shivering any more. Rich lowered off an in situ wire and we stowed the kit and headed off for anywhere that wasn't as cold and windy. For him it was a descent to Torlundy to try to re-establish communication with his feet, for me it was round for a quick romp up North Gully. But.... when I got past the ice I'm looking up at the left fork which I've always wondered about.... I know its an ice pitch and goes at IV,5 and that its only thinly iced today.... but.... Anyway a short while later I'm scratching around half way up a rocky groove with a real sympathy for Rich as I'm being blinded by the upwards blowing crud i'm digging around in for placements. I dropped a sling on a spike and rigged a back rope to see me past the hardest move and was pleased that it lifted itself off neatly as I got to the top of the groove and staggered away from the edge and the wind. Down No.4 and off for some calories after a slightly odd and extremely cold day .
Conditions? Its been so cold that the upper routes have experienced no freeze thaw for a while so whilst there is snow and ice there is no ice building and the rock is largely dry and black especially to the right of No.3 Gully. Anything that looks white could be hiding ice or it could just be bottomless crud. The ice is cold and brittle- sharpen your picks! Today the team that beat us were making steady progress on a well travelled looking Gargoyle Wall, Bill, Derek and their third report that the first pitch of Glover's Chimney is unconsolidated rubbish (they got up it nonetheless) and 2 late arrivals were making short work of Lost the Place on Creag Coire na Ciste (which looked good and seems to be having a real resurgence in popularity as word is out that is climbable in these conditions).
Lower down I hear Finnisg-aig Falls and Oui-Oui have been climbed as have routes on Beinn Udhlaidh. The turfy climbs on the Bridge of Orchy hills are in good condition or for somewhere quieter go to Glen Shiel and explore....
I'm working low level again tomorrow but should manage a quick route on Friday.