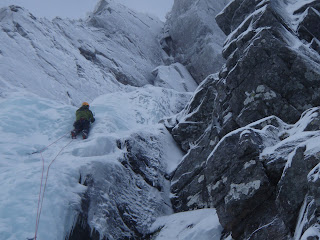 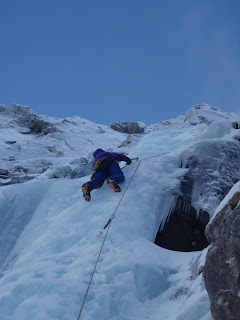 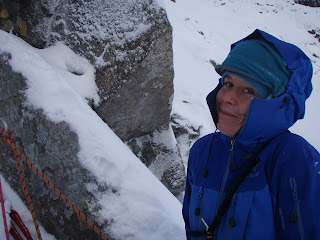 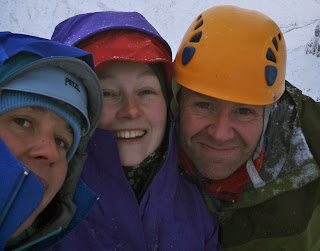 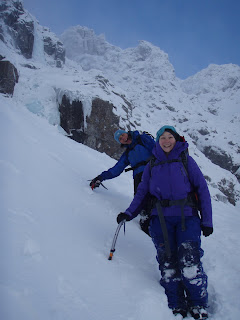 Jen saw pictures of the ice at base of Compression Crack on my blog one morning and got in touch asking if we could go out and do it. So today she, Sal and I walked in to a very white and snowy Ben Nevis to see what things were like. Rosie's blog post from 2 January showed bare grass and rock in the basin below the route but some old snow. This was all buried by the recent powder and we chose a line carefully assessing things as we went. In the event today where we were there was only a little poorly consolidated soft slab with a slightly firmer layer about 2cm thick on top. I led the route whilst the other 2 gossiped (and shouted encouragement -or maybe they were just taking the p**s- when they remembered I was there!).
We had a little fresh snow and temperatures were cold throughout the day. From the top of the main ice pitch we built an ice screw thread and abseiled off. A second ab from the in situ tat placed by Rich, Dot and I in December was only just buried and a little excavation allowed us to use that to get back to our bags. We saw a party on the Carn Dearg Casacades and a team who had backed off of Castle Ridge after losing a battle against huge amounts of powder.