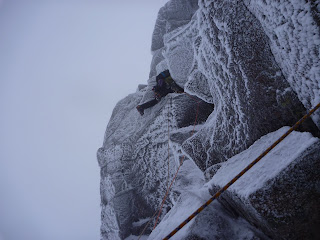 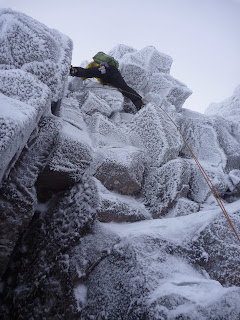 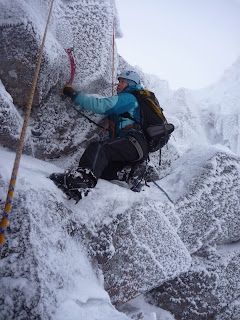 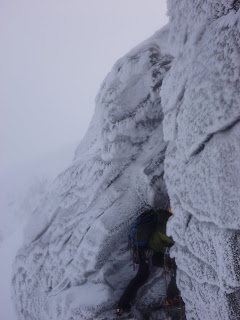 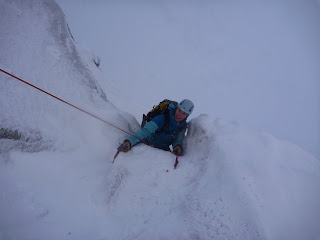 No work this weekend. It was the AMI AGM at Glenmore Lodge but I decided to skip the workshops to go climbing with friends. Ewen, Sal and I planned to head to Hell's Lum but we topped out at the head of the Goat Track in light rain to meet Gary heading in the opposite direction with the news that things over there were a bit slush puppy and busy.
So we're coming down the Goat Track and it's pretty busy in Sneachda (surprise, surprise) so I pulled a 'Plan Z' out of my back pocket and the other two enthusiastically (foolishly?) agreed to my cunning plan. Every time I've been around Fiacaill Couloir/Invernookie/The Seam I've wondered what the broad left hand side of the Couloir is like. Fiacaill Buttress IV,5 gets no stars and I haven't spoke to anyone who has done it. We started by soling the first pitch of Fiacaill Couloir before breaking out left on some interesting mixed ground. Funny word that... 'interesting'. Any time a climber uses it with emphasis alarm bells should start ringing. In this case a footless heave over a bulge on pretty good neve led to a number of innocuous looking but downright awkward high steps. Ewen took a pitch of good positive climbing alongside and over a chimney to the top of a thinly iced ramp descending left. I had a bash at climbing cracks half way down this but didn't want to commit to a big rockover without seeing what was over the lip above me (good job- more blank thinly rimed rock it turned out). So it was back to the guidebook description and into a thoroughly thrutchy chimney to finish.
Nick Bullock entertained us with tales of his climbing year after all of the AGM stuff was out of the way and I think the revelry continued for me until well after 2am. A late start today and a bit of a mountain bike around the forests blew the cobwebs away. Next week i'm at the Lodge working an Intro. to Winter Climbing Course. Weather looks wild!