A little more breezy and cloudy 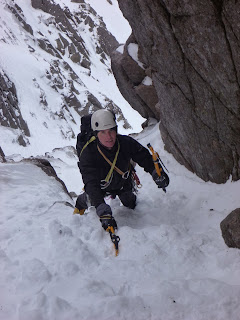 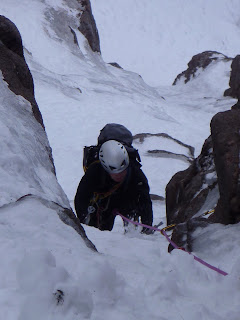 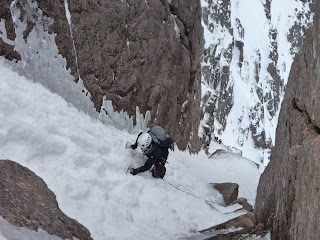 Eoin on the sharp end 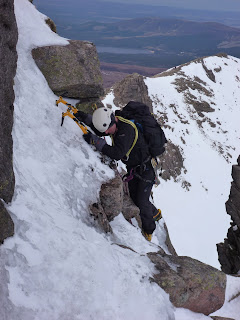 Day 3 of our Intro to Winter Climbing and it was obvious that the guys needed something to get their teeth into. So we walked into Sneachda again and turned the corner to see no-one on Fiacaill Buttress. So we geared up and I led the first pitch to warm the guys up. Tom leads HVS in summer and has shown good footwork and movement skills over the last 2 days so he then led the crux (placing his first ice screw on the way). Eoin has less clmbing experience but needs to work on his belay building so he led the straightforward snow pitch over the (buried) chockstone above. Tom led the guys out of the top in style. Well done on your first winter leads guys!
Dropping down into Sneachda from the col on the Fiacaill ridge it was feeling much warmer and there is debris at the base of Alladin's Couloir that wasn't there on monday so watch out for the large cornices still in evidence. I was again working for Glenmore Lodge today.
Posted by Alan at 21:18