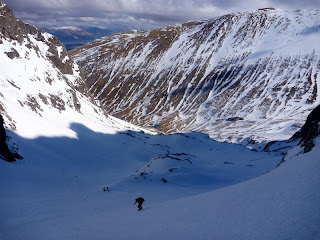 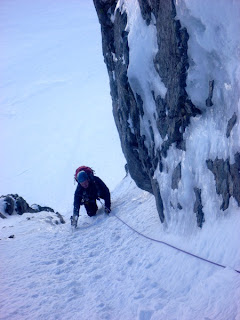 Top of the first pitch 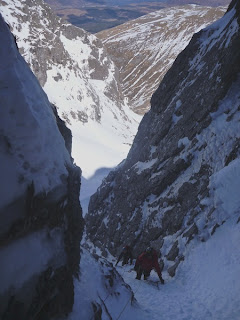 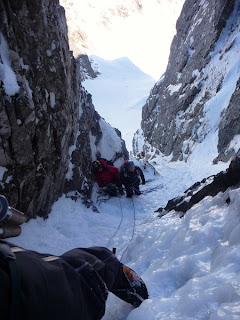 Looking down the third 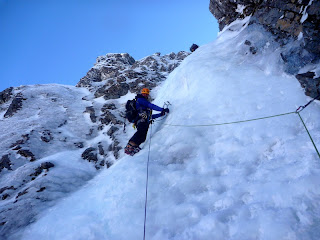 Loving it on the fourth 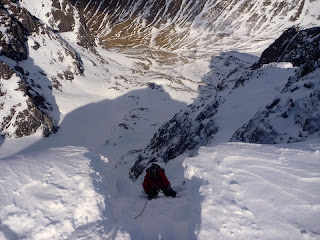 Approaching the cornice on the fifth 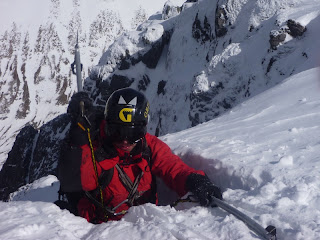 Adam aka 'the human fly' pulling through the slot 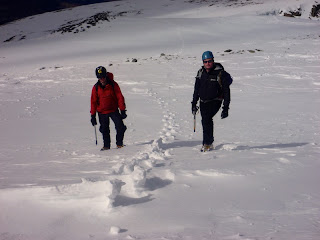 Yet more raised footprints
What to do.... Adam and Ben wanted ice. Adam has done quite a bit and Ben a bit less, we had a chat about their kit, their experience and their aspirations and I recommended Green Gully. Another sunny walk in. More fat ice and magnetic neve... 5 pitches of fun. We topped out and whilst I sorted the kit the guys ducked off to the summit. I met them coming down near the top of Tower Ridge and we headed for the Red Burn.
The guys described a conversation with some ill equipped folk discussing bum sliding down the hill. Then we spotted 2 teams, a pair lower down and a 3 higher up, who were obviously stuck on steep icey ground. Poor footwear, no crampons or axe and no understanding of conditions. I cut a line for the first pair and helped them to the rocks and the zigzags (he was going to get an earful... she told me how angry she was at being led into this whilst I walked her across to him). Then it was back up to the other 3 who were spread out on a steep icey slope. 3 lines of steps (goo opportunity for Ben and Adam to learn the noble art... thanks and well done) and we got them together and helped them move down rocky ground to the path. All were grateful and hopefully have had a real wakeup call as to what the mountains of Britain are like.
Posted by Alan at 21:01

Yup, its crazy.
When we topped out on Comb Gully the other day someone wandered over in jeans & trainers to photograph us. A few more steps and he'd have discovered the quick way off the hill.

Wow what a great day u had and ended up giving others a better day then they could have had. What a return for the human fly.

Glad folk enjoy the blog and glad we were there when we were. Some folk were in pretty precarious positions and the outcome could have been unpleasant :-(