25 Dec Glencoe - building an appetite for my Xmas Dinner 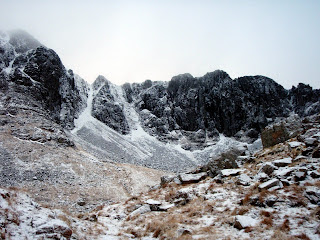 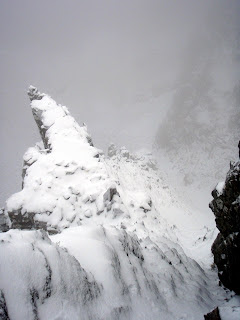 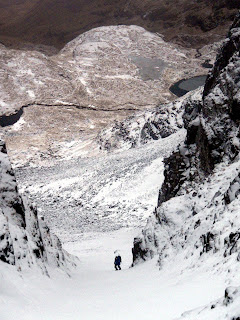 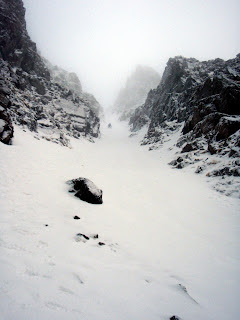 Spent a few hours this morning building an appetite for my turkey. Jane and I walked into Coire nan Lochan. The weather started clear and there were a dozen or so people headed into the Lost Valley. Lots of evidence of old water ice on the path in but it was defintiely thawing. I nipped up Dorsal Arete - having it to myself was a novelty! There were blobs of ice and some very firm snow and turf on the ridge. Descending Broad Gully I met a lone mountaineer making rapid progress up the hard snow there (there was a little isolated windslab near the top but not enough to concern me). Boomerang gully was bare and turfy at the nearrows and the steeeper butresses looked a little black and bare to be justifiable. It will be warmer for a few days now but the colder weather will return at the end of the week.
Posted by Alan at 21:27 5 comments: 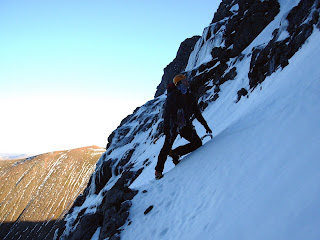 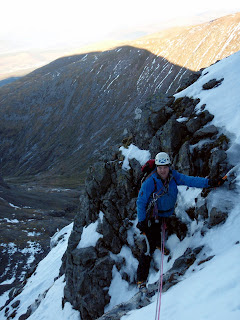 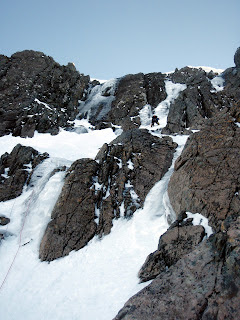 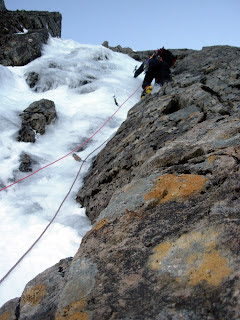 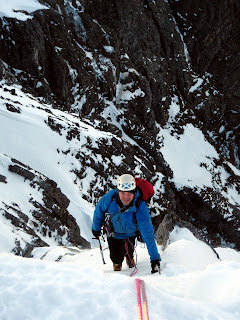 It was a stunning day on Ben Nevis today and the temperature inversion meant that whilst it remained sub zero in Fort William the temperatures up near the summit were much milder. Jamie B and I walked in to Coire na Ciste this morning. We spotted another pair heading into Number 2 Gully so we headed for Raeburn's Easy Route. There is a fair amount of ice around but very little outside of the main gully lines climbable, the snow, where you can find it, is firm after the thaw and refreeze. Towards the end of the route we broke up left and found a couple of good pitches to give a line that went at about III,4. The ice was brittle on the surface but hollow underneath and there was water flowing behind the ice 10m from the plateau. Popping out into the evening light we were rewarded to amazing views. We passed by the summit and descended Coire Leis (patchy snow, ice routes forming but not quite complete on the Brenva Fave).
Posted by Alan at 22:29 50 comments: 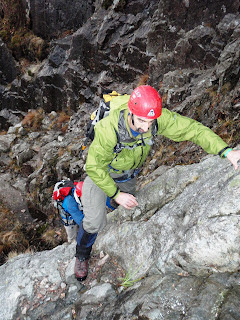 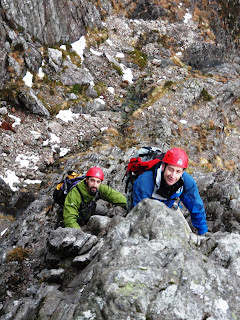 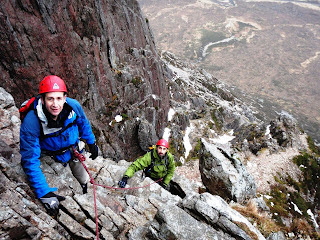 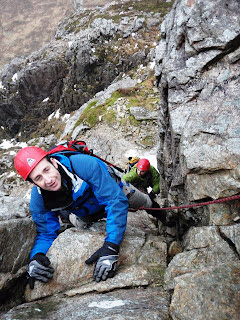 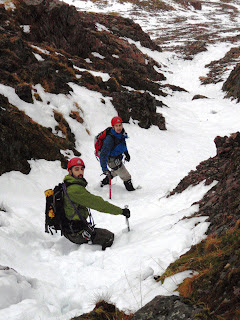 Al took Dave and Gerry out onto Buachaille Etive Mor for a days mountaineering. The guys are fit keen mountainbikers keen to develop their skills in the mountains. The snow of last week has largely disappeared and Curved Risge was almost completely bare. There was a lot of deep, soft, wet snow at the top of Coire na Tualich to be waded and slid down though! We managed to look at some simple ropework, direct belays and placing gear and the use of the boot and ice axe on small snow patches near the summit.
Lets hope for a quick return to the great mixed climbing conditions soon!
Posted by Alan at 13:57 No comments: 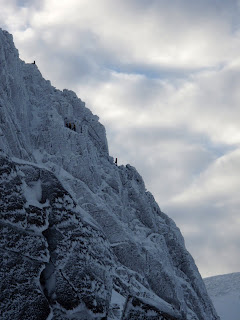 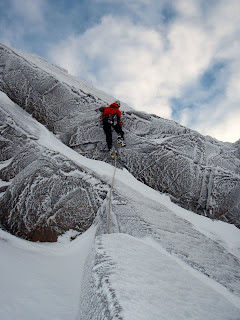 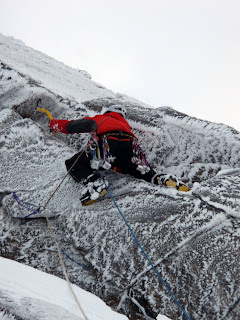 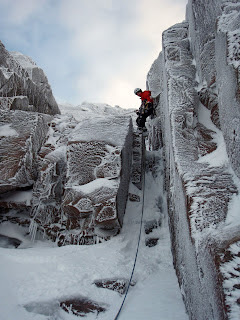 Over the weekend I was at Glenmore Lodge at the provider's seminar for Mountain Leader Training Scotland as an SPA provider and on Sunday was learning all about the new Climbing Wall Supervisors Award. On Monday I led Derek up Opening Break (IV,5) on the Mess of Pottage over in the Cairngorms. On Tuesday Kenny and I started up the winter Version of Genie (V,7) in Coire an t Sneachda. A routefinding error saw us wander onto Salvation (V,7) which finally defeated us and we headed back to the coire floor still happy after a good pitch or two of hard mixed climbing. A bit warmer today and the crags are stripping back again but its been a good start to the winter climbing season.
Several parties have been in the Ice Factor asking me about conditions locally and in the Cairngorms. Its worth noting that whilst the current spate of hard mixed routes have come in and gone out of condition quite quickly, many easier routes (especially gullys) need more of a build up to avoid grovelling on loose rock that there isnt yet enough buildup of snow and ice to cover or hold together. It only takes a day like today of thaw conditions to strip of a lot of the apparently healthy covering of early season snow so be careful out there.
Posted by Alan at 20:36 No comments: 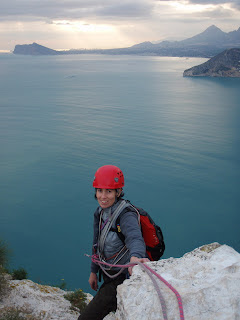 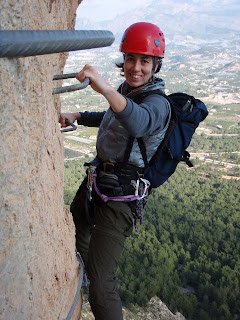 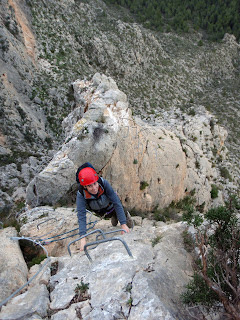 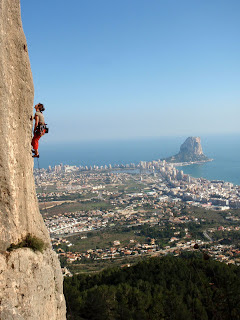 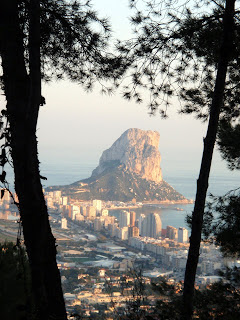 Via Valencianos on the stunning Penon D'Uchaf was a nice change from bolt clipping. This long route (trad gear but bolt belays) sports a very polished 3rd pitch but we did it on a pleasant cool day. The 'sport' via feratta was continuously steep but a great alternative for a non climbing day. With a big group of friends the week worked out cheaply for food, accomodation and transport but word of good early season climbing conditions made me keen to return to Scotland......
Posted by Alan at 20:26 No comments: 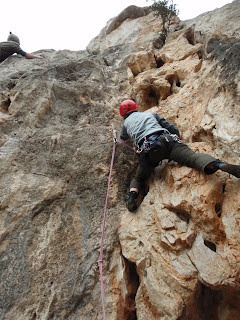 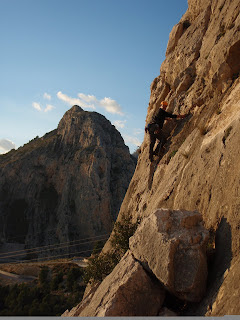 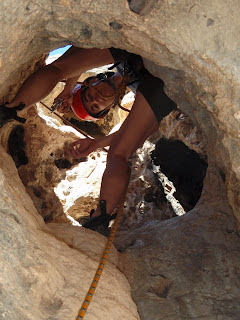 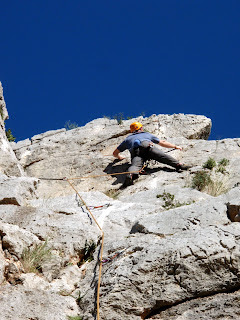 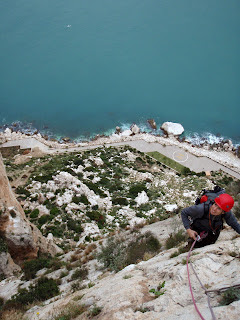 Although I've climbed all around the world I actually havent done anything on mainland Europe except ice climbing in Norway, until now...
A dozen friends (and four children) took a villa in Javea and spent a week climbing near Calpe. We spent days at Toix, Gandia, Orla and on the Penon dUchaf. Jane and I also spent an afternoon on a fun via ferrata above Benidorm on the Ponoch.
Posted by Alan at 20:14 No comments: