Not quite plan A in Fiacaill Couloir

Day 4 of our Glenmore Lodge Winter Lead Climbing course. Plan A today was Fiacaill Couloir. Coming round the corner into Coire an t Sneachda and there was a big stream of people stretched out below Fiacaill Buttress so things didn't look promising. We headed onwards with Plan's B and C in mind but kitting up below the buttress I realised only one other team was still in the Couloir as the others had all gone right to Invernookie except for a pair who were trying Bellhaven. This left one team ahead of us and I found out is was Stuart from Climb 365. Soloing next to my students is not something I want to do with just anyone above me but I was happy enough with Stuart at the same sort of game.
Unfortunately once we got in there with him on the right hand side we were on the left things were a lot thinner than I'd hoped. The left side and has been well beaten up both in the past and recently meaning less snow, ice or turf than I wanted for my team to lead on. I gave them a rope on the first 2 pitches and by now the team from Bellhaven had bailed and were climbing around our two teams. We asked them not to lead amongst our ropes and they ended up belayed just above me so we had to wait half an hour for them to sort themselves out and tackle the chockstone. I got Paul to give me a quick belay over it and asked him if he felt like leading it- he was well up for it! He had no problems and was soon bringing Anne up who made it look easier than either of us had. She then led through one quick pitch up the shelves on the right above the col.
We had a little time to make up to make our transport so it was a brisk descent of Fiacaill Ridge to end the day. Not quite plan A as i'd rather there had been enough snow/ice for me to leave the guys to it on the first couple of pitches but there was no way to know that until I got in there. And I didn't want to sandbag them on Paul's second lead- though he cruised the chockstone!
There were teams making good and questionable decisions today. Fiacaill Buttress area was busy because it was obvious that the approach was well scoured except for a few patches of obvious snow to avoid and another team was approaching the Wavelength/Fluted Buttress area carefully sticking to scoured snow. The teams making a beeline straight up through the slab to the base of Fingers Ridge or the folk traversing the snow beneath the Mess of Pottage on the other hand.... 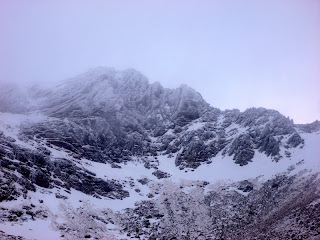 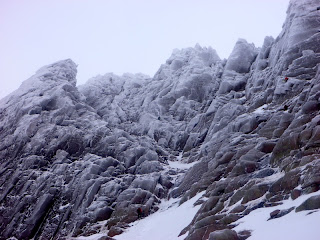 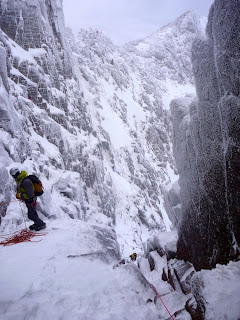 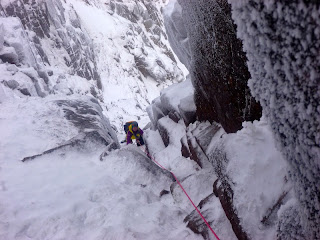 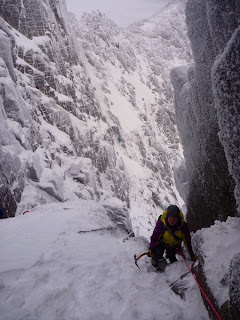 Arriving at the belay 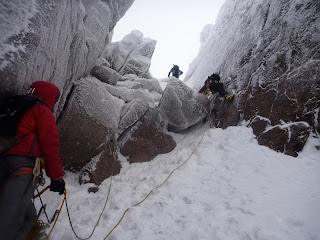 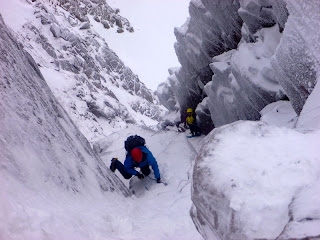 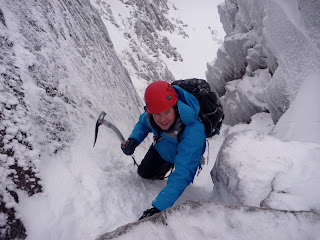 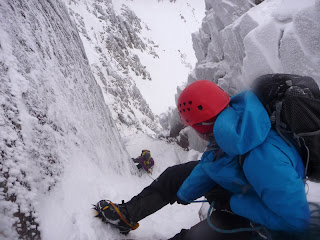 Anne making it look even easier 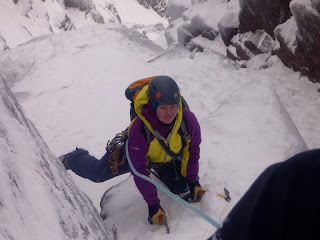 'That's how its done guys' 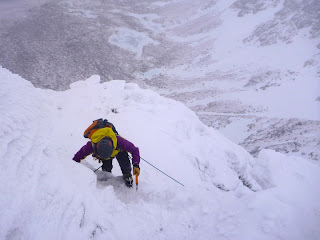 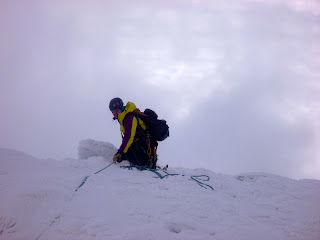 You ought to be a part of a contest for one of the best
sites on the net. I most certainly will recommend this web site!


Here is my weblog ... legal ecstasy