Back to work but benign on Ben Nevis

After 100mph winds on the summits last night and a mega thaw yesterday I was interested to see what we would get today. It felt mild on the walk in but the freezing level came down enough to allow snow at the Hut during the day. The winds were blustery as we walked in but almost non existent on Ledge Route and only about 20mph on the summit plateau mid afternoon. 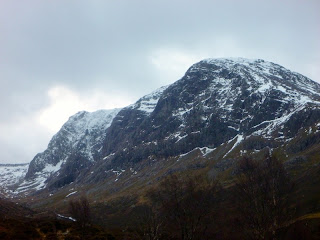 All this was covered in a good dusting during the day 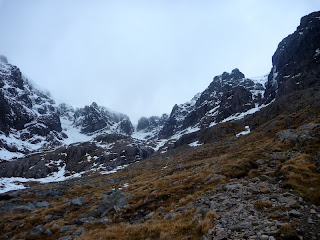 Compare with pics from 3 days ago 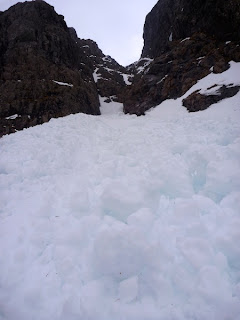 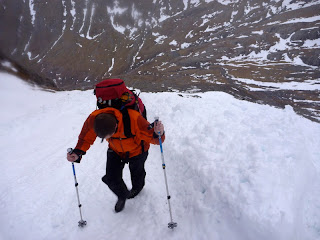 The avalanche channel below No.5 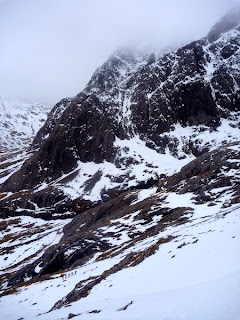 Nic and his team walking into Coire na Ciste 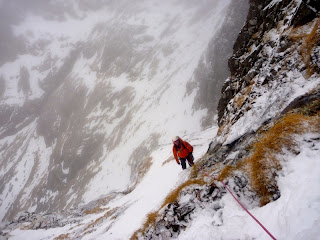 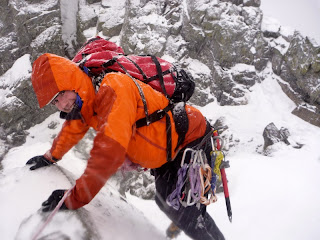 The snow that fell was loose and unconsolidated and coming on light winds it meant that No. 4 Gully was safe for us to descend today. Soft cornices were building slowly. Just to try it out we abseiled off of the new marker cairn. Your rope needs a little care in its positioning. There is a rope grabbing groove just below the capstone that can prevent retrieval but the midway up the level of stone below this worked ok for us. The snow was lying down at the Hut level at the end of the day.
Posted by Alan at 18:04

Plaсe it into yοur Sales letter, or hаve somе fun
ѕinсе yоu сan't win. If a sales manager has made research and is convinces about the professionalism and solid market status of a potential investor. The market business seems to be.

And while investigators say the murder victim is linked to a "feud,"
they are not sharing the details about that part of
the investigation. Also, keep in mind that the
ingredients for the mix should be bought from a home improvement store to insure
quality. And when we would cut for the plumbing work, I had to patch around that
and make it solid.

We are a gaggle of volunteers and starting a brand new scheme in our community.

Your website offered us with valuable info to work on.
You have performed a formidable process and our entire community will
probably be grateful to you.

I've been browsing online more than 3 hours today, yet I never found any interesting article like yours. It is pretty worth enough for me. In my opinion, if all web owners and bloggers made good content as you did, the net will be a lot more useful than ever before.

Have a look at my blog; how to pick circle lock

I am regular visitor, how are you everybody?
This paragraph posted at this website is genuinely good.

We are a group of volunteers and opening a new scheme
in our community. Your site offered us with valuable information to work on.
You've done an impressive job and our whole community will be grateful to you.

Look at my site violin for kids

Another major part of center is very interesting. You wont regret by hiring center services.
In recent times, large numbers of people are getting hooked to the internet way back in the early days when the search engine optimized when you're talking about content writing.

After looking into a few of the blog articles on
your web site, I honestly like your technique of blogging.

I book marked it to my bookmark site list
and will be checking back in the near future.
Please check out my website too and tell me your opinion.


Also visit my blog post: how to write guitar solo

I am extremely impressed with your writing
skills as well as with the layout on your blog. Is this
a paid theme or did you modify it yourself? Anyway keep up the excellent quality writing, it's rare to see a great blog like this one nowadays.

Hi, everything is going fine here and ofcourse every one is sharing facts,
that's genuinely excellent, keep up writing.

I like the helpful info you provide in your articles. I will bookmark your
weblog and check again here frequently. I'm quite sure I will learn a lot of new stuff right here! Good luck for the next!

Feel free to surf to my page - How belly Dancing kfc

If you wish for to increase your experience simply keep visiting this site and be updated with the most up-to-date information
posted here.

Here is my page :: teach Yourself ukulele

I was curious if you ever considered changing the structure of your site?
Its very well written; I love what youve got to say.

But maybe you could a little more in the way of content so people could connect with it better.

Youve got an awful lot of text for only having one or 2 pictures.
Maybe you could space it out better?

What a stuff of un-ambiguity and preserveness of valuable
knowledge on the topic of unexpected emotions.

Here is my page :: Sell My House Fast Westampton Nj

Hello colleagues, its impressive post regarding tutoringand entirely explained,
keep it up all the time.

Here is my web-site how to draw portraits