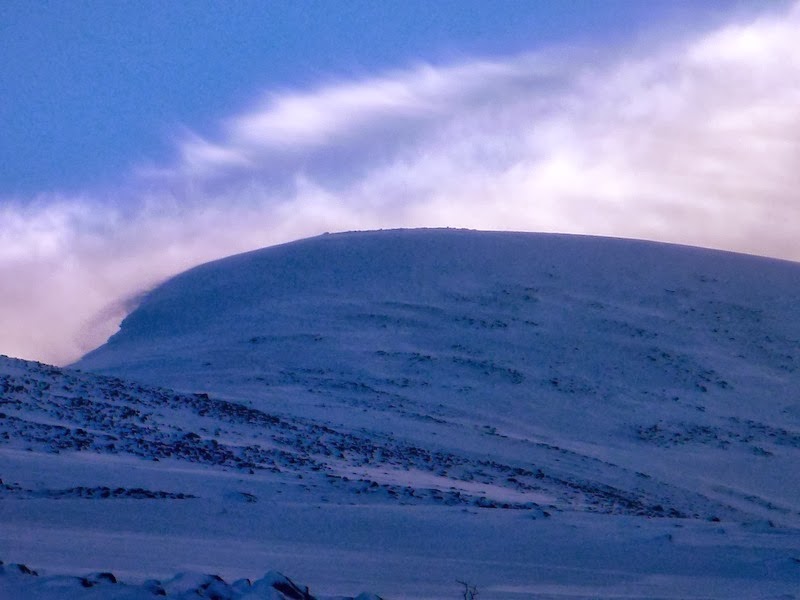 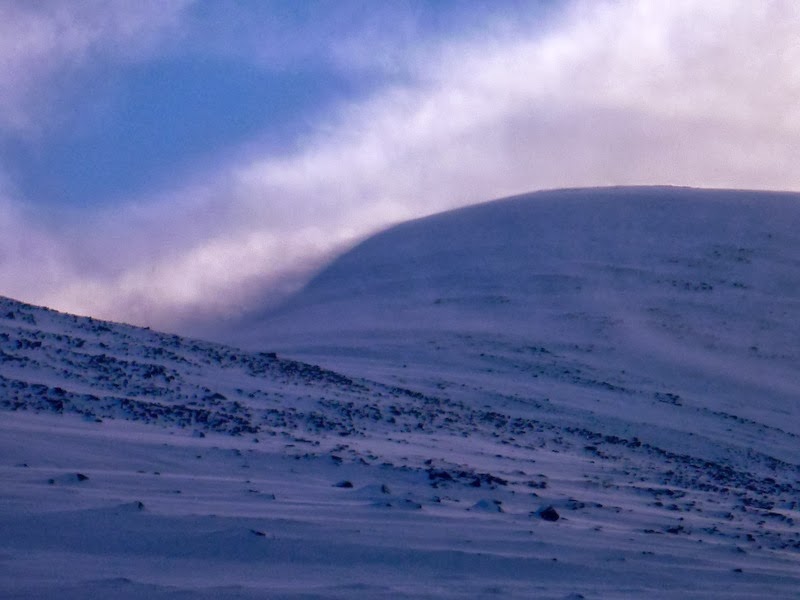 …followed by a lot! 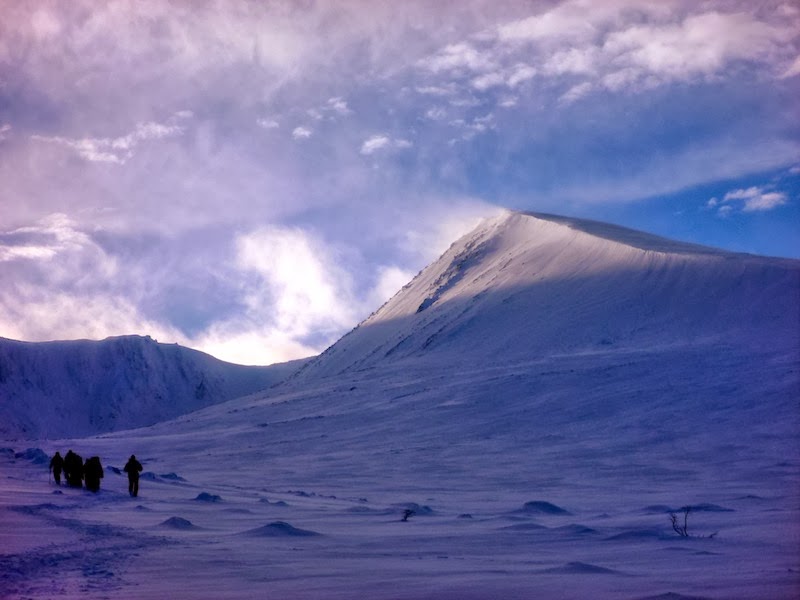 View into Coire an t Sneachda 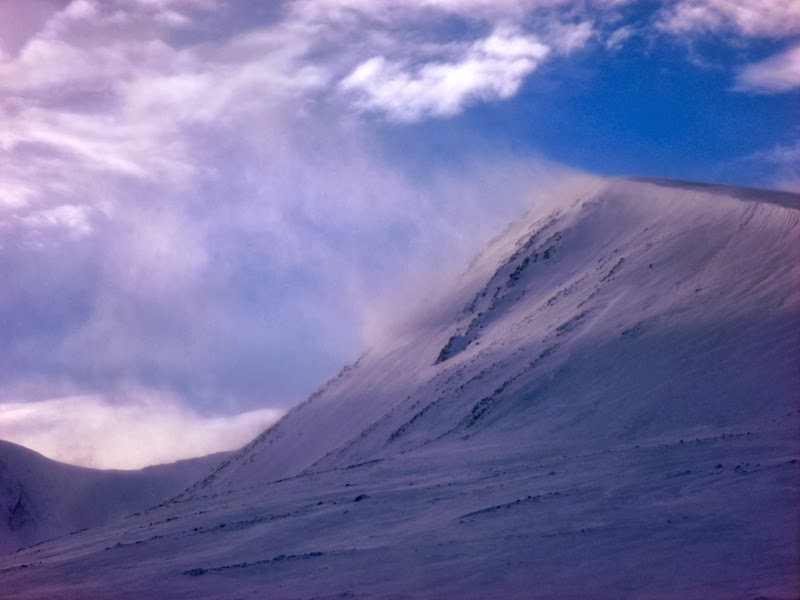 More snow on the move 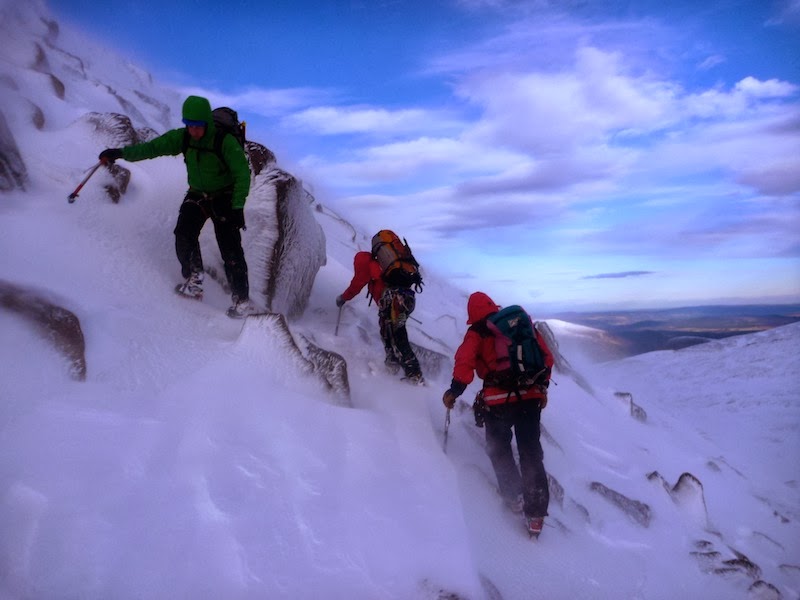 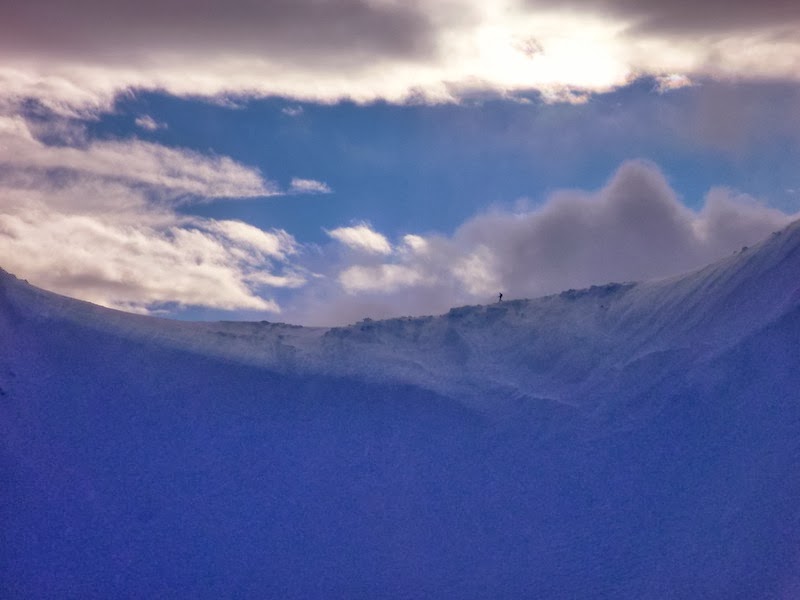 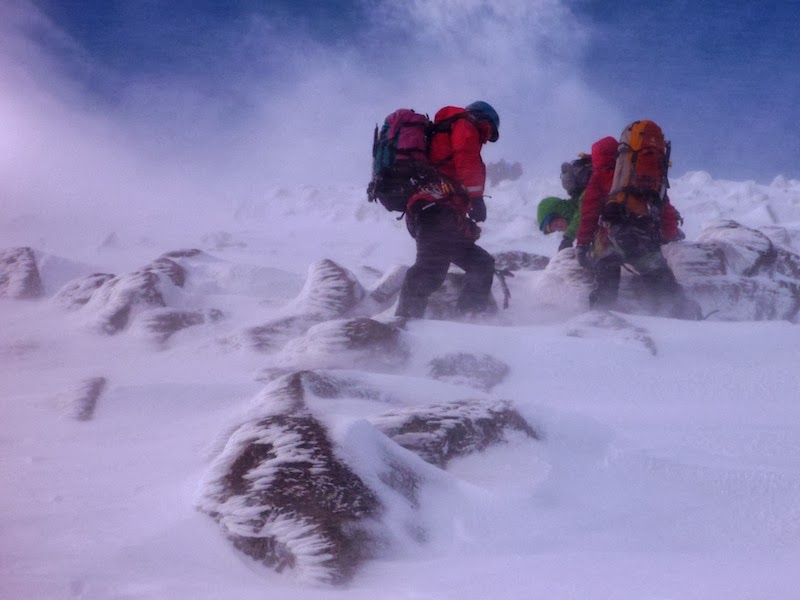 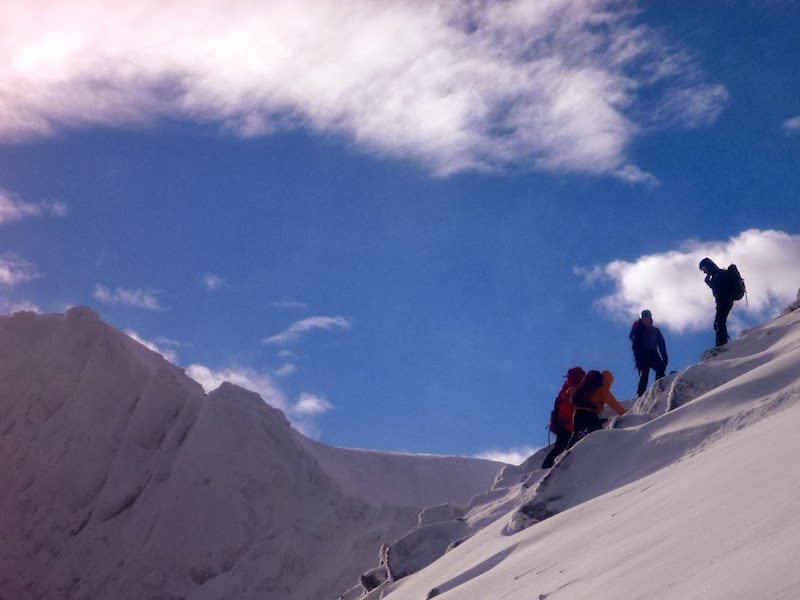 A moment of calm 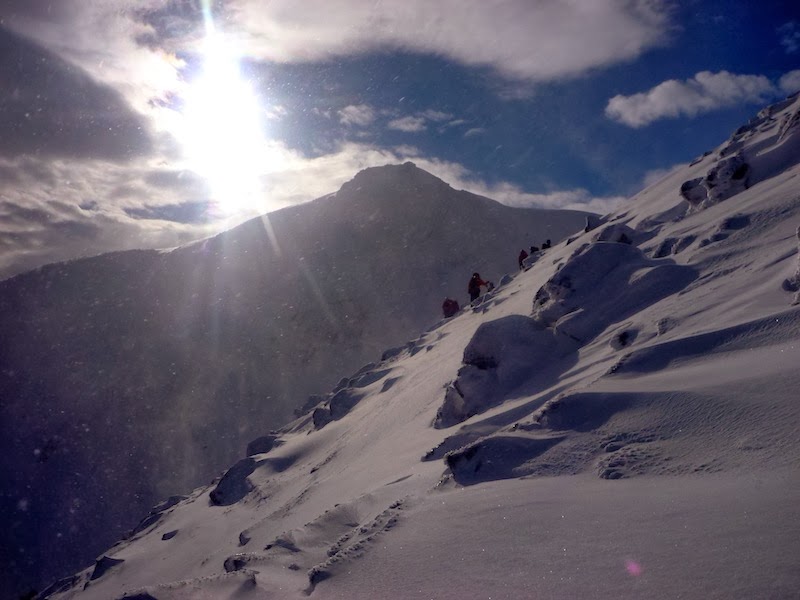 Here comes the next squall 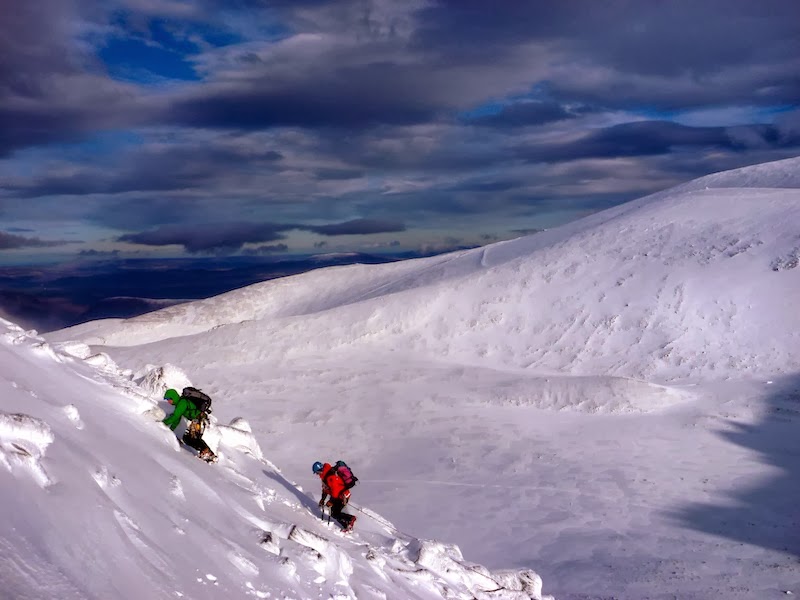 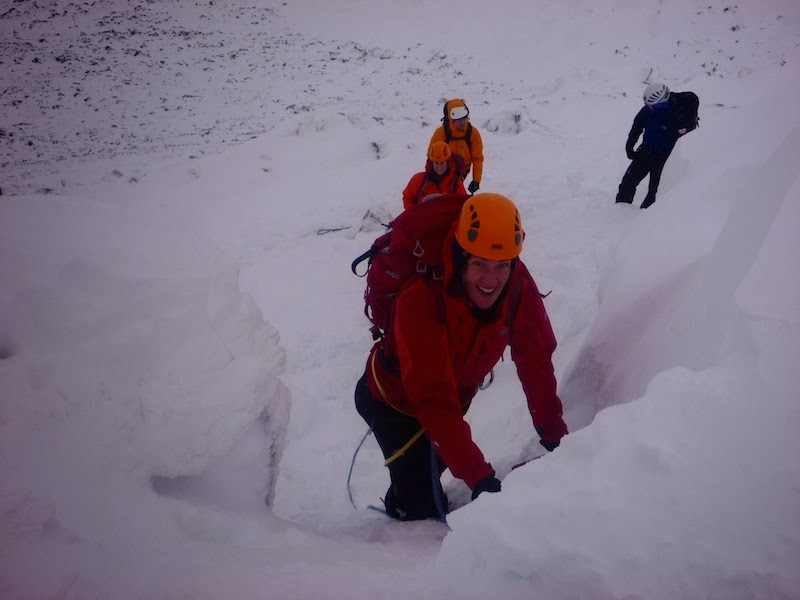 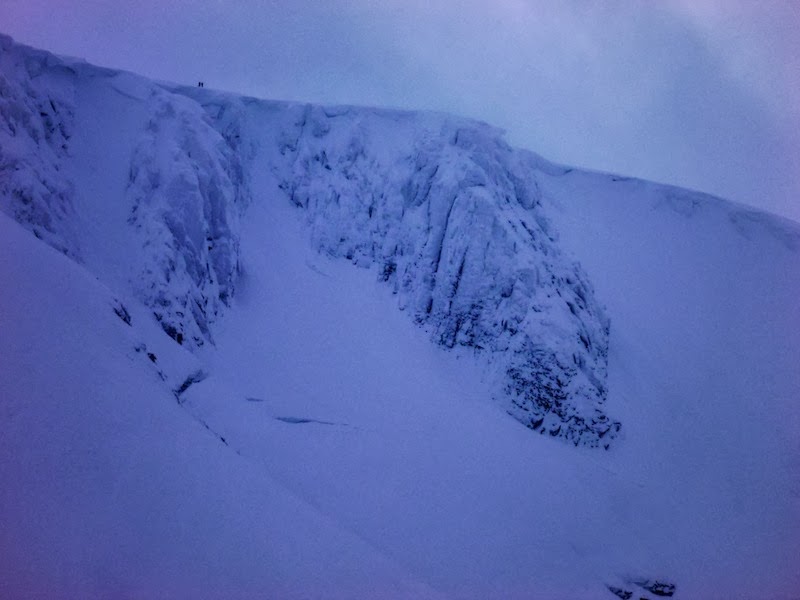 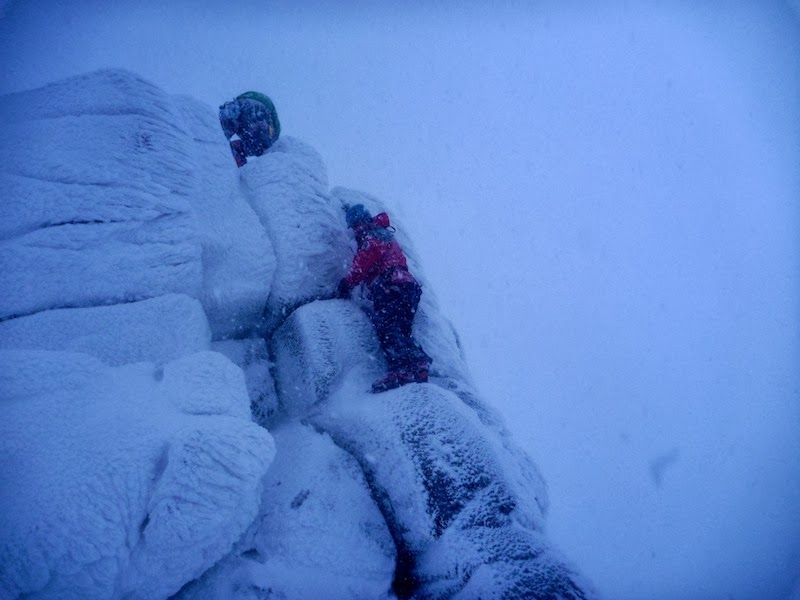 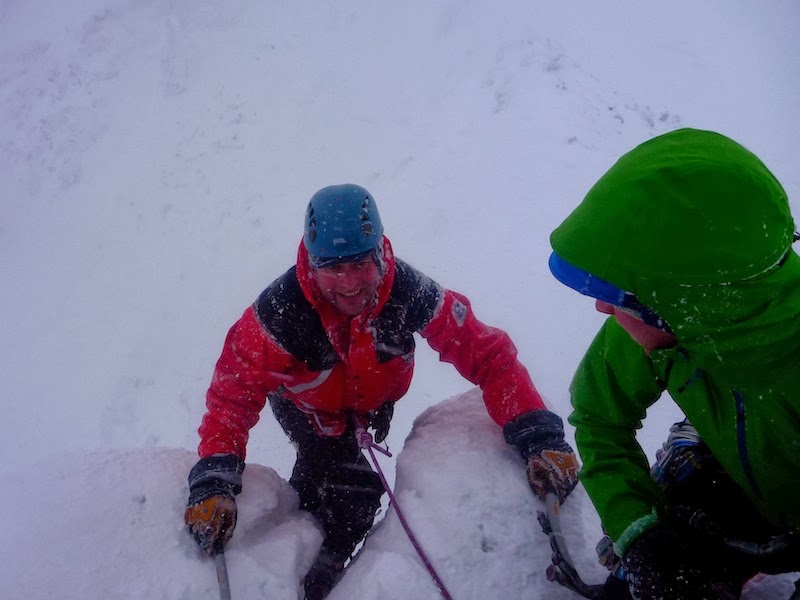 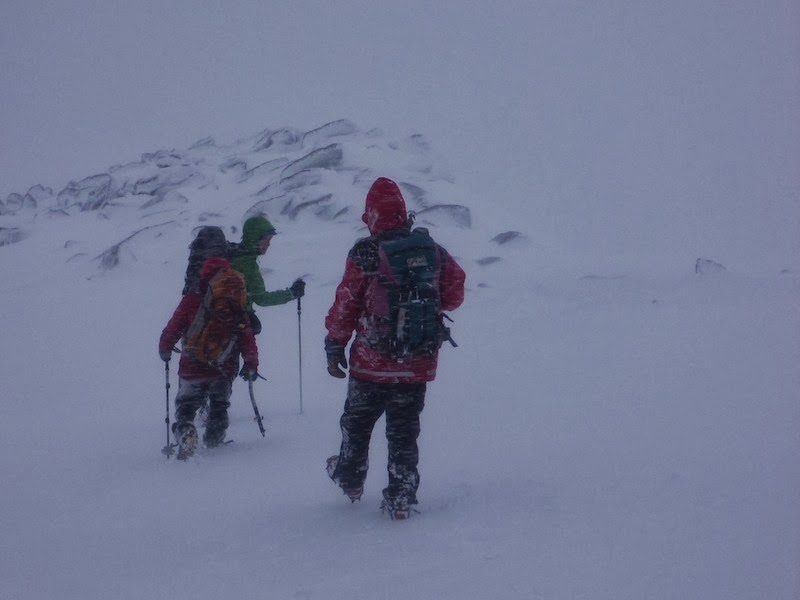 Descent in poor vis…
…and then I walked over a cornice. Entirely my own fault. The candidate I was assessing was navigating down the Fiacaill of Sneachda and we were very close to the bottom when I spotted another Glenmore Lodge team. We had just discussed the impotence of avoiding the edge in the very flat light so I left the candidate following his line and headed off to discuss transport with the other party. I was trying to head them off and thought I was low enough on the ridge to be below the hazard but was more focussed on them and then I was tumbling. I fell a few feet, slid another 20 feet before arresting (at least i'd been sensible enough to keep and axe out) then got myself off the slope by the shortest route, popping out just downhill of my rather concerned group.
So rather than stay quiet about it I'm blogging it. I was distracted and the candidate was navigating with me looking over his shoulder and we had just discussed the importance of staying clear of the edge in this visibility. Then I switched my focus to the other team and made the assumption that by now we were so close to the base of the ridge that there was no cornice. And then I stepped through it. Having my axe in hand even though we were on easy ground made a difference to how soon I stopped (I always carry one axe when in 'walking mode' on the approach and getting off of climbs, not 2 axes and if i use a pole as well I don't use the wrist leash). The only injury is to my pride.
Otherwise there were people making the best of the buried conditions with parties on Pygmy Ridge and Original Summer Route. There were plenty of teams at Creagan Cha No but some access lines and routes are threatened by cornices. The regular easy to mid grade routes in Coire na t Sneachda are buried, Fingers Ridge isn't a ridge, the trident gullies are almost a uniform snow slope and the Mess of Pottage is barely visible. The tops of the deeper gullies sport huge cornices. Parties have been approaching Invernookie with a shovel there is so much snow and often they have been abseiling into the route. Have a care and stay focussed- unlike me.
Or go skiing!
Posted by Alan at 12:29

Bloody hell, maximum respect for being so upfront Alan -I'm impressed! Not only on account of your outstanding candour, but it's actually really useful to learn of such an incident occurring in terrain where most experienced folk would have had assumed serious cornice possibility was negligible. I know I would probably have made exactly the same error given the same situation (30+ years mountaineering experience). Cheers for the beta! Glad you're all right.
Cheers, Col

Hey Alan glad you were ok and fair play for 'coming out'.....in the context and retrospectively you gotta admit that it is feckin funny;-)!!

About to begin my WML training to learn exactly this sort of lesson from experienced and honest instructors. Conditions are looking interesting and I'm sure your readers will take heed.
Thanks for post.
Legolas