Wintery walking in the Mamores 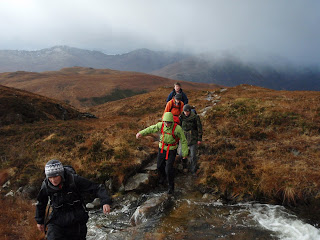 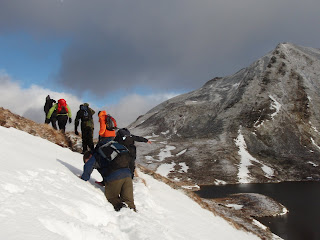 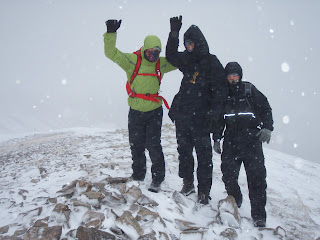 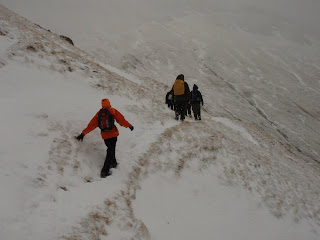 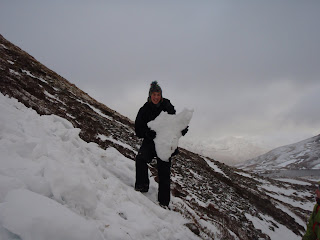 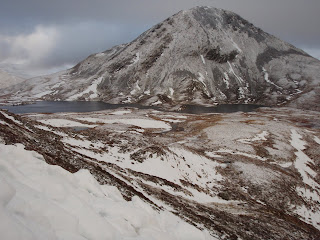 Today I was out again with the SVQ students from Lochaber College. The objective was Binnein Mor in the Mamores. After the rain of yesterday this morning showed a little fresh snow down to 800m. We left Mamore Lodge and headed up into Coire an Lochain where there was plenty of old wet snow and slush underfoot. We traversed onto the north side of Sgor Eilde Beag and zig zagged up onto the main ridge. By point 1062 it was clear that the ground underfoot was too icey for the group's footwear and we headed back down helped along by gusty hail and snow storms. Just at the mouth of Coire an Lochain, on Sgor Eilde Beag's SE corner is a shallow gully which was full of debris from a recent full depth slab avalanche. This probably came down in the thaw in the last 2 days. We investigated the debris and spent some time bum sliding before the team navigated themselves back to Kinlochleven with me giving them plenty of space to find their own way down.
The ice on the ridge was formed by the wind and under the crust on snow patches the snow was still soft. I saw running water at 900m at 2pm.
Posted by Alan at 17:51