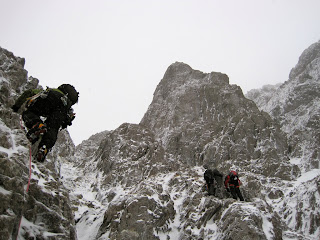 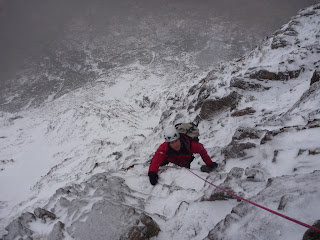 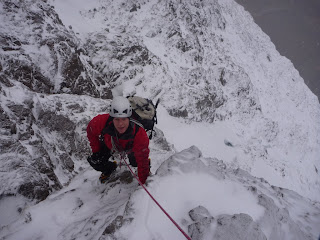 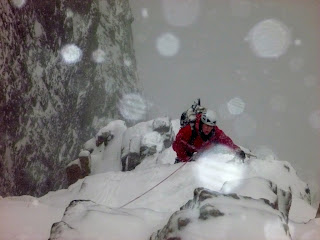 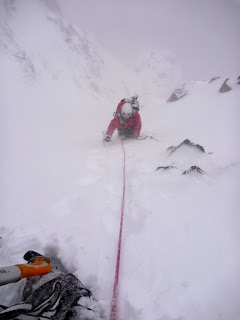 Out with returning client Andy today and Plan A was North Buttress on Buachaille Etive Mor. However as we neared Great Gully we could see 2 pairs already heading up to the route so we pressed on round to the base of Curved Ridge. We could have cut across to North Buttress from there but the prospect of possibly standing cold and damp waiting for other people (and of standing beneath people on a steep route with plenty of loose rock) didn't appeal so we carried on up. The first sections of the ridge were just snowed up rock and climbed with gloved hands and axe tucked away. Beneath the wall and corner pitch though we hit the first of some quite good snow ice.... and 5 other ropes of climbers. With a little creative route finding and thanks to some polite other climbers we were allowed to pass all 5 over the next hour- thanks folks! There was plenty more good snow above before the cairn marking the top of the ridge.
The basin beneath Crowberry Tower looked very scarey.... a large expanse of luminous fresh wind blown snow. Surprisingly though away from the edges it turned out to be bone hard neve with only a small amount of unconsolidated powder on top.
We pressed on to the summit and down to the lip of Coire na Tullaich in strong winds and falling snow. Here I was again concerned about fresh loading but as with earlier, when we were there, the headwall of the Coire turned out to be firm hard snow with only an inch of powder on top making for a quick descent.
Warm, wet n wild tomorrow, hopefully better in the New Year. Have a good one!
Posted by Alan at 18:55