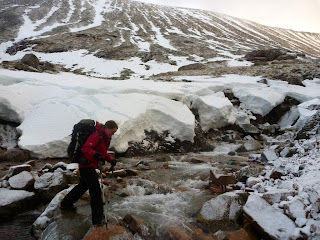 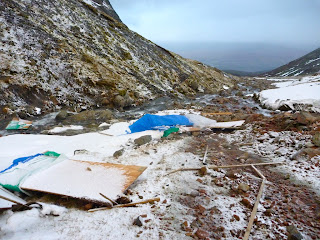 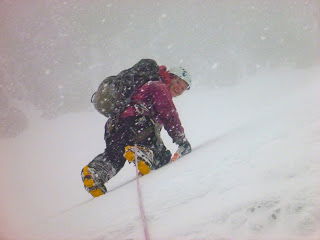 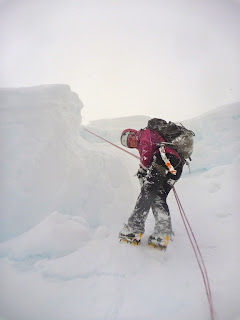 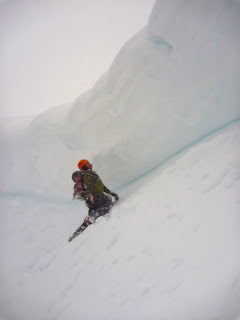 After a couple of days of heavy rain and mild weather in Lochaber I was keen to take a quick peak at Ben Nevis to see what had survived. Lucy and I took a very light rack and a short rope and wandered up.
The evidence of the thaw at the hut level is obvious; big creep lines and lots of deep thawing snow drifts beside the river. The paths have taken a bit of a beating too with at least on of the huge stepping stones newly placed this year having shifted and tilted to an awkward angle. The ice is all gone from the Carn Dearg Cascades and there is a lot of debris below the hut (ply, tarps etc.) after the recent storm damage.
Above the hut the snow heading into Coire na Ciste would best be described as variable. There was some very firm but a lot of softer wet stuff that let you plunge calf or knee deep. Passing No.5 we saw plenty of avalanche debris but not as much as I'd expected to be honest. I'd heard of truely enormous cornices at the top and expected to see debris everywhere but there were only 3 large tips of debris. I reckon there is still plenty up there. We could see a little ice on the steepest part of The Curtain but it would take a lot to make it climbable. Garadh was broken by several waterfalls.
In Coire na Ciste there is avalanche debris beneath each of the main gully lines and the start of No. 3 Gully Buttress but still lots of snow. It was still very variable in quality but things like Glover's, Green, South and the Central Gullys all had a line of something white down them.
There was plenty of spindrift around and we had no real idea of how cold things were above us or how deep accumulations were so we carefully felt our way round the base of the Comb (big curtain of ice as the foot of Comb Gully Buttress) and beneath the Upper Cascade (only a little ice, not climbable at anything like V).
So far we'd found quite a lot of good neve, a little hollow ice and that the fresh deposits of soft slab were very thin (only an inch at most). We carried on up Raeburn's Easy which was however pouring with water beneath the ice (and the uppermost corner beneath the block belay was unfortunately slush). The traverse across to the plateau was good on firm snow with only a little buildup of soft snow at the lip of the plateau.
We'd seen Gary heading for No. 4 Gully so we braved the wind to head round the coire rim to the marker post (still there at present) to see if he had topped out. There were obvious fresh cornices everywhere and the top of No. 4 was no exception. The cairn was partly buried so we popped the rope round it and I headed to the edge for a look. 4 feet below the fresh cornice was a much larger one which has slumped in the that leaving a great deal of overhanging snow. It had fortunately refrozen and the Gully below looked to have little fresh snow in it so we abed over and headed down the gully arriving back at the van before dark.
Plenty of white stuff up there... all it has to do is survive the next few days thaw.
The video shows some larger shots of conditions around the Coire.
Posted by Alan at 21:36