Man there is a lot of snow up there. Today I was working for Max and Hunter Mountaineering and took Clare to Ledge Route. I'd spoken to a friend who was there yesterday about snow conditions and was concerned about how much precipitation had come down overnight and the fact that it seemed milder than forecast. At the base of No.5 Gully the snowpack seemed friendly but there is an awful lot of snow above you there and the lack of debris but amount of snow led me to believe (correctly) that there would be biiiig cornices above and a well loaded top of the gully. We broke straight out of No. 5 and climbed some small ice smears/pillars out of the line of fire onto the start of Ledge Route which is as buried as I've ever seen it. There was a soft layer of newer poorly bonded snow 2 to 3 inches thick atop the older wetter snowpack at this level. It was falling away in small sections as we stepped through it. There was no evidence of anyone passing that way the day before at all and after a little wading we again broke right up some short steep grooves giving some III/IV climbing (gear was almost impossible to come by, if you could find the rock every crack is choked with ice) onto the area where the route becomes a ridge. From there to the top was a wading, floundering, gasping effort through snow that was calf to waist deep. We left quite a trench.
We saw climbers on Castle Ridge, heading into the SW Ridge of the Douglas Boulder area (but think they ran away) and someone atop Trident Buttress. Hard work to get anywhere or get any gear if climbing today.
Over the top we dropped into the Red Burn and followed it all the way down to the track.
Think I'm going to hurt tomorrow.
More pics on my Facebook page: https://www.facebook.com/climbwhenyoureready.mountaineering/media_set?set=a.648581215184999.1073741893.100000993792059&type=3&uploaded=11 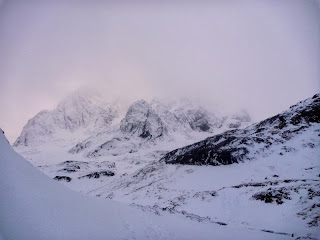 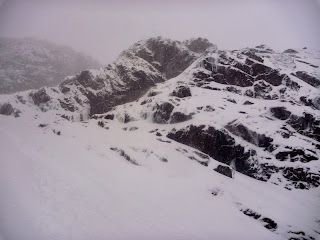 The ramp and the ice we used to access Ledge Route 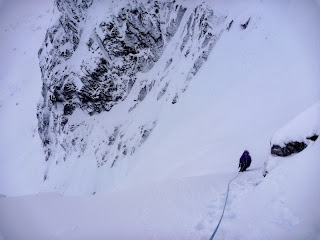 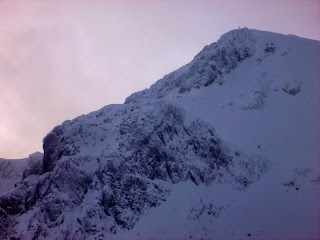 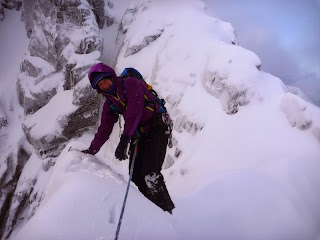 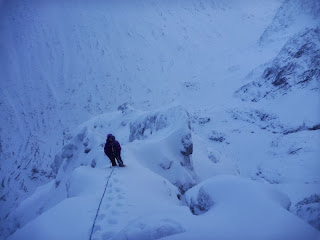