Barry has returned to do some climbing for a day or two and was keen to look at multiptich rope work. He's also wanted to do something on the Buachaille more interesting than walk up Coire na Tullaich. Toss in a dry forecast and Agags Groove was crying out to be climbed. Rob was along to learn some MIA type stuff so I led Barry up the first 2 pitches leaving him in a position to build his own belays and bring Rob up behind. Then it was time to up the tempo a little so we sent Rob out in front to finish the upper 2 pitches. From there we scrambled up the crest of Crowberry Ridge and down Curved Ridge accompanied by a handful of tenacious midges.
Of note today was that the ravens have definitely figured out that sacks are a food source at the base of Ranch Wall. From the top of the second pitch I spotted on tugging at Barry's pack. There was no-one around so a well aimed pebble scared it off. A pitch later and the same thing happened with the same result. On the last pitch I only had to raise my hand and it flew off. Back down at the bags and it had had its revenge. An empty snickers bar wrapper and no trace of Barry's sandwich- his bag had been raided! 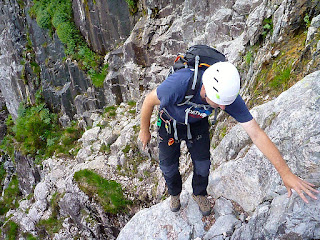 Scrambling up Curved Ridge to begin

Sunny rock in the Highlands 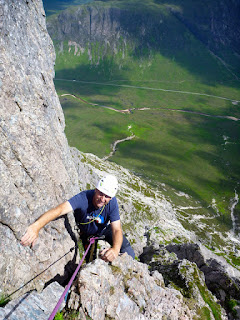 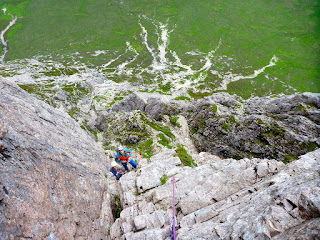 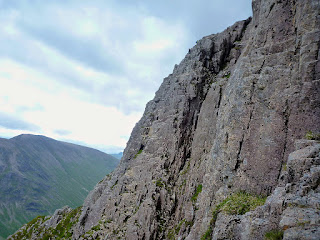 Barry building his own belays and bringing Rob up 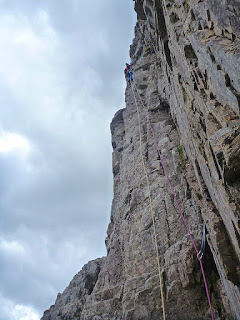 Rob enjoying the exposure on P3 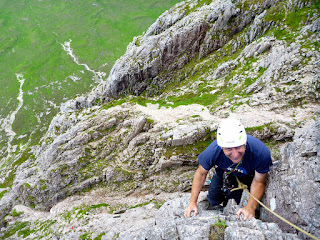 Barry pleased with the crux

View from the top 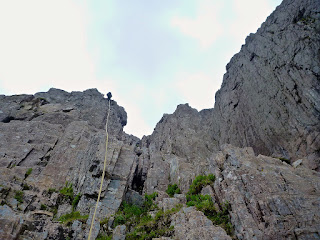