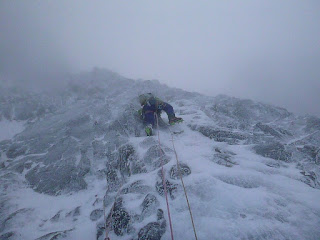 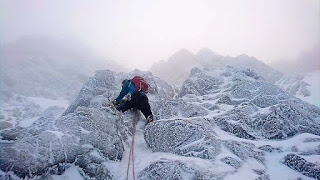 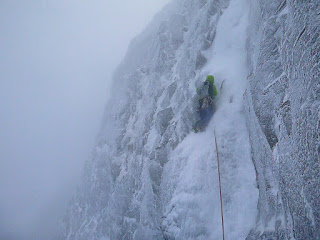 Steve under a cloud of spindrift 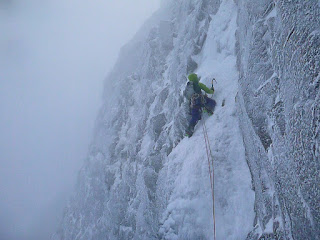 ...and on the move again 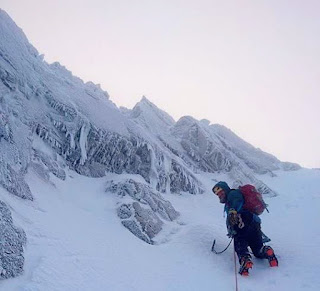 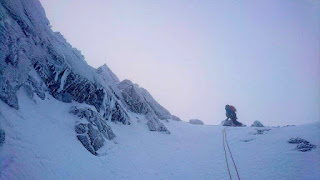 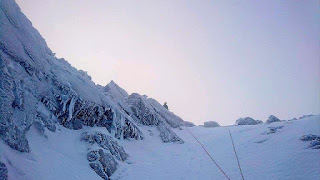 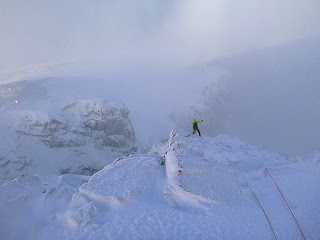 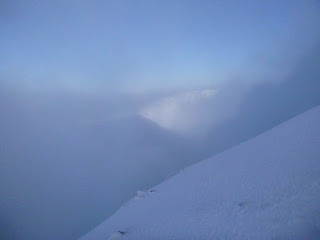 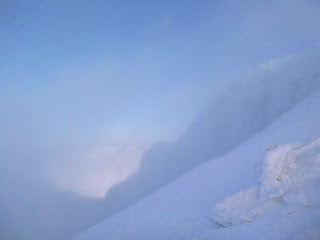 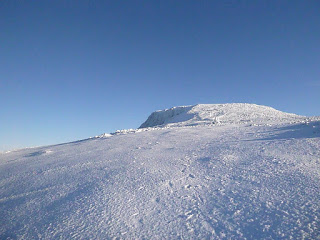 A view of the top 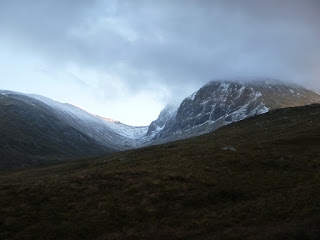 More wintery than it looks from here!
Steve gave men a call yesterday to offer an opportunity to burn off a little Christmas cheer. We walked in to Ben Nevis catching Iain and James on the way and psyche was not particularly high as we crossed the Allt a Mhuillin and sweated our way up through the rain showers into the murk of Coire na Ciste. Another pair was headed straight up the coire and we were pleased to note the Comb had some rime on it. Gearing up near the bottom of Comb Gully we'd found some firm snow and spotted a little debris sliding out of both it and No.2 Gully so we quickly headed further left to access the basin below a lean Cascade. Traversing right most things weren't well formed and finally we were beneath No.2 Gully Buttress which was at least icey and white looking so we were happy to repeat it. There was some fine hero ice in the back of the groove of the first pitch and this continued higher up as we climbed 4 pitches to a very windy, wintery plateau. We packed and stowed and descended along with the usual crowd of completely ill equipped folk suckered in by the appearance of the mountain from below. As we swung our packs on though we were treated to a brief window of blue sky and paused above the clouds for a moment before heading down to do battle with further Turkey in my case!
Lots of evidence of the freeze thaw process in the form of ice smears everywhere lower down (The Curtain and Garadh Gully both have big smears on them) but higher up it needs a little more of the same to generate more ice. We couldn't see what the big mixed lines were like but going by our route they would be rimey and icey. It was cold above 1100m for us today.