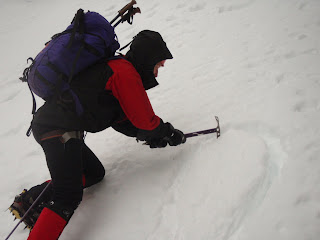 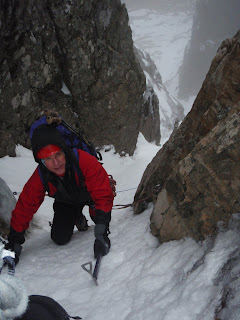 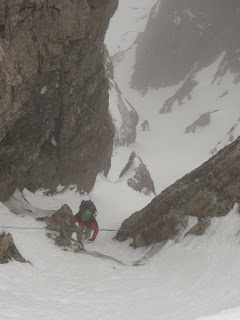 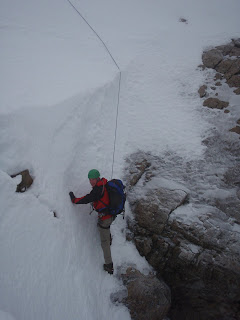 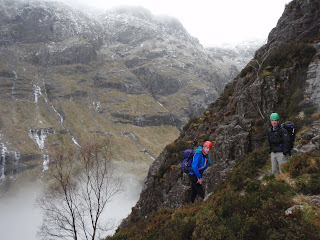 On Friday evening Nina, Davie and I went to the Ice Factor to spend a little time loking at efficient movement, gear placement and retreating from ice climbs in advance of their upcoming honeymoon to Japan (i'm suitably jealous).
Yesterday and today I have been out with Merlin and Michael looking at mountaineering ropework and some skills specific to the International Mountain Leader syllabus. Yesterday we went to Ben Nevis and looked at moving around on the narrow firm snow patches on the way into Coire a Ciste. Then we moved up into No. 3 Gully which the guys led using snow anchors to belay from. The right fork gave a small icey step to add interest. Ice was continuing to build (there is more in Garadh and on the line of the Curtain than 5 days ago) and the snow is iron hard. Parties out on all the usual suspects mentioned in the last post. Mike Pescod climbed the bottom half of 2 Step Corner, Richard Bentley climbed Comb Gully Buttress with a spicey icey finish and a party who climbed Gardyloo reckoned the final step would provide a shock to the average Grade II leader.
Today we went to rockier ground to look at some ropework and chose the Zigzags on Gear Aonach in Glencoe. A little light rain lower down was providing a dusting of much needed snow on the tops to supplement the copious amounts of water ice around. We came up and down the same route so didnt see the tops but in general the peaks are looking whiter than yesterday round Glencoe although it is just a light cover over the ice, frozen turf and pathes of very hard old snow in hoolows and gullys.
Posted by Alan at 17:30