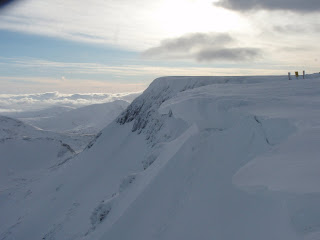 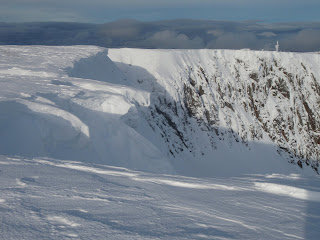 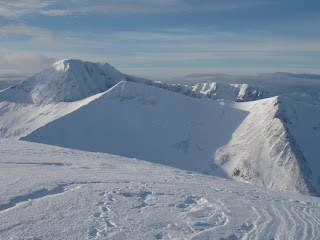 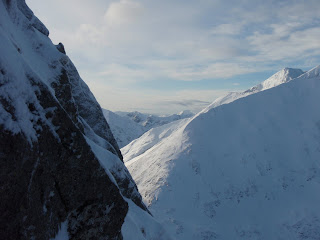 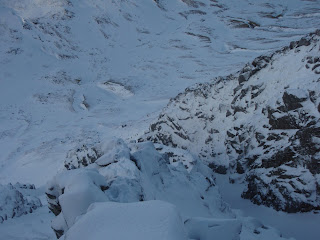 This week I've been trying to catch up on paperwork, proofreading a book for on Climbing Walls and running a Climbing Wall Award Training in the evenings. Yesterday looked nice enough that it would have been a shame to stay indoors all day so I went to Aonach Mor to take advantage of the 0800 Gondola. I walked round to the west face with 2 parties from Adventure Peaks and headed up to the bottom of Golden Oldy on some nice wee ice bulges. There is a good trail broken around here at the moment. At the last minute I headed right onto Western Rib (II/III) which gave a few hundred metres of nice knife adge rock and snow aretes to the summit of the mountain. I wandered over the the top of the East face and met Blair from SAIS performing his checks and we both agreed that much of the slab was stabilising slowly but surely. There are however some large cornices about that will descend at some point in the future! Spike and his party had abseiled into Right Twin and Kenny found Stirling Bridge hard going as the cracks were thouroughly iced up. I headed back down before lunch to do some prep before the mayhem of February and March- I've been booked solid for a while now folks but can still recommend some other good people to try for those looking for instruction.
Posted by Alan at 13:08