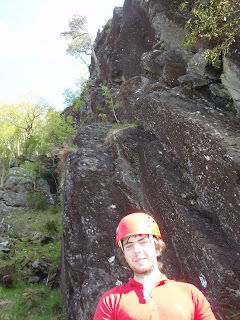 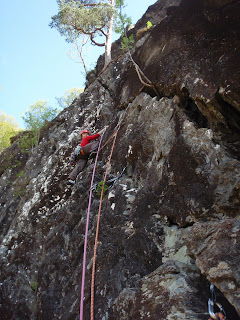 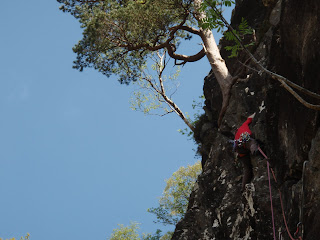 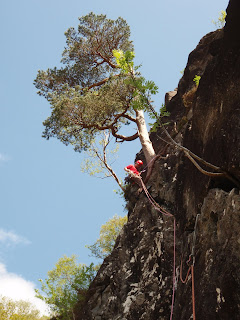 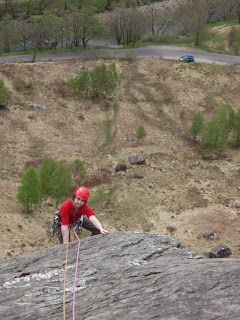 Do you have a route that is a real nemesis? One that you know you can climb but which the idea of trying just fills you with unpleasant feelings?
Storm in Glen Nevis is one of the real area classics. Many, many years ago I was dragged up it by a friend, the start was awkward, the second pitch airy and scarey and the top had me pulling on gear sweating and cursing after a hanging belay that had turned my knees to jelly. So ever since then I've avoided it. I've always wanted to go and do it but always found an excuse not to.
Last night I decided it was no more excuses time and I sent out texts looking for a partner. This morning Stuzz and I cycled out to Polldubh on a day that was finally fine and warm after the apparently endless cold weather we have been having. The excuses were trying to come back...... Stuzz hasn't led enough to take the second pitch...... its west facing and will be in the shadow this morning...... is that a damp streak I can see up on the crux? Get on it Al.
First pitch is as deceptively awkward as I remember it.... its 4b but feels more difficult than it should be... I know some really good climbers who've fallen off this... sort it out this is the easy bit.
Second pitch, this might be Stuzz's first 4c lead but he seems really psyched. Cruises it. I've got to follow- this should be my kind of climbing; steep but positive.... so why am I over reaching, overgripping and getting my feet in a tangle?
Then that hanging belay on the tree- sorted. Stuzz in the right spot and I hang just below and to one side as we swap the gear. Now pull up and stand between the pine and the rock- good. Too good, I don't want to leave..... and..... bugger I was right it is wet! Get on it. Think positive. You've led far harder than this! Plan the first few moves and the gear from this ledge. Off we go..bridge..nut- get in... up (breathe you twit)... yuck that's wet (keep going)... another nut, up and another, holds are small, wide bridge on a dirty hold and a wet one... twist fingers in the crack- cam, wrong size-sod it, turn it round, further up the crack, legs too tense- wide bridge, breathe! - Better... up 'yes, yes. yes'- think positive... Biiiiiig ledge, love it. Nut, great. Phew...
As ever its rarely as bad as you think. Its a great route and I'll do it again. In fact..... now I've got to go back for the E1 Drect Finish.
Move over St. George- I've slain my dragon too.
Posted by Alan at 15:26

Sounds a bit like my Storm story... seconded in July 1990, when I remember getting quite excited by the top pitch (no aiding, but just whipped out the runners and left them dangling on the rope), now mentally built up into some far out experience and still trying to psyche myself up to go back and lead it (has to be this year really, because that'll be 20 years since my first ascent)! :-/


Why should you hire a cleaning company for home?
House cleaning is part of home maintenance. It is a fact of life that must be made from dishes, washing clothes, removing dirt from the ground and so on.
No one really enjoys the hostage work, but it can't go on unattended for a long time.
While everyone can agree that cleaning the house should be done, but no one really enjoys it, people are still hesitant to think about a house cleaning company.
This happens for a number of reasons; people have doubts about strangers in their homes, they don't want people to deal with their
personal belongings, they don't feel they can justify expenses and are worried about the damage they do.

Our company provides our customers in the city of Qatif with the best cleaning services with the strongest offers that set us apart from other companies in the field of cleaning and domestic services with the presence of distinguished workers we have experienced in the fields of cleaning and the presence of the latest and best equipment that helps to provide services in a distinct and better and easier ways that help to earn Customer satisfaction and the presence of trucks to transport luggage with furniture packaging in an excellent manner that prevents injury and keeps it as it is. You just have to contact our company to reach you at your site and provide the best offers.
شركة تنظيف بالقطيف
شركة تنظيف منازل بالقطيف
شركة تنظيف كنب بالقطيف
شركة نقل اثاث بالقطيف
شركة مكافحة حشرات بالقطيف
شركة تسليك مجاري بالقطيف
شركة الصفرات لتنظيف الشقق بالرياض
شركة الصفرات لنقل العفش بالرياض
We remind our customers that we have special offers that set us apart from other companies and huge discounts of up to 30%. Just call

At your service 24 hours, we promise you the best offers and provide distinguished services that satisfy your satisfaction, God willing