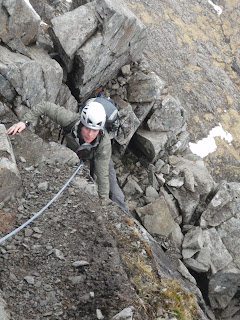 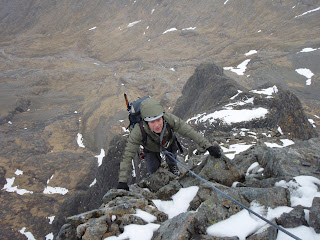 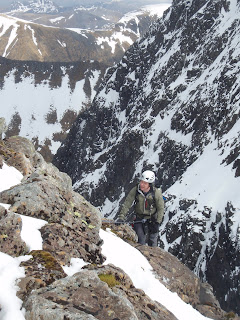 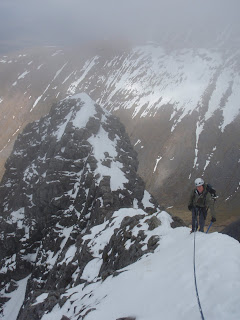 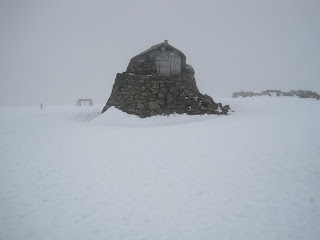 Today I took Andy to Tower Ridge; he had originally expected a summer scramble but with current conditions on Ben Nevis I'd warned him to bring an axe and crampons. The day started badly when I got run over standing on the pavement on the phone near the BP garage. Having been knocked flying and given a rather dead leg I was surprised to be questioned as to 'Where were you standing?' and told 'There is never anyone there' by a driver who was quite defensive and almost as shocked as me! No real ham done but I was happy to get off the road and onto the hill!
We had some good bright weather between snow showers and stopped to put crampons on above the little tower. There is plenty of soft snow retreating on the ridge to expose firm grey ice on easier ground. The steeper rocky sections are, however, largely bare. We made good time to a snowy plateau where cloud came and went as we visited the summit and made our descent by the Red Burn. Winter lives on Ben Nevis and Point 5 looks complete as is Tower Scoop and Good Friday and all the easier gullys.
Posted by Alan at 18:52

This is probably a stupid question, but here goes...

As a winter newbie (Done Dorsal Arete only..) is it sensible to try the easier gullies in late season conditions?

I have the belief that due to my lack of Winter experience, I'm safer off the hill in anything but good, solid winter conditions...

But it's the age-old conundrum of experience being gained through making, and living through, mistakes.

What are your thoughts?

Hi Kenny, ok my thoughts.
Late season conditions are as variable as any others and need to be taken day by day.
So one day might see fresh snow on old spring snow another might just be consolidated old snow and a third might be hard icey stuff after an overnight frost.
Often (not always) late season means milder weather and more uniform snowpack. This MAY reduce avalanche hazard (as snow is well into a cycle of stability- providing its not on a clean rock layer like the Great Slab) but may also increase cornice collapse chances (there are some belters waiting to collpase on the Ben just now) and rockfall (we heard lots on the move today). In terms of gear there is often more available easily in gully walls as the rock is bare.
As an example lets look at today:
-We are into spring after a really heavy winter without yet having had a contiuous period of thaw and heavy rain.
-Cold over last few days but well into a cycle of freeze thaw.
-Light snow showers recently meaning insignificant build up on a uniform snow pack.
-Rising temperatures today but not a drastic thaw.
So before going onto the hill I would expect easy gullys to still be full of uniform spring snow. I wouldn't expect much accumulation of fresh snow as a layer on top of this, but would expect this to be soft on the surface underfoot. This soft snow can be slippery especially at the edge of snow patches where it may cover hard old ice gradually exposed by thaw. I would expect the possibility of steep snow scarp slopes or cornicing at the top of gullys. Hopefully the worst cornices are long collapsed but anything visibly overhanging would be flagged up mentally as an extra hazard to be aware of/avoid. I would be aware of the possibilty of loose rock and spontaneous rock fall.
Looking ahead to the next few days rising temperatures will increase snowpack reduction, softening of the surface, cornice collapse possibilities and rockfall- so worse than the cooler temperatures of today. Perhaps not the time to go into a gun barrel gully. Ridges may be safer but beware lots of loose rock. E.g. Dorsal after a thaw can be a loose nightmare.
Thats just ,me thinking through some of my mental risk assessment out loud. Hope its useful.
Al

It's good to get an idea of how the pros Risk Assess conditions.

Appreciate the time you took to reply.