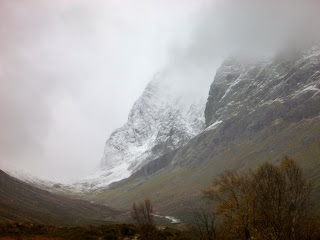 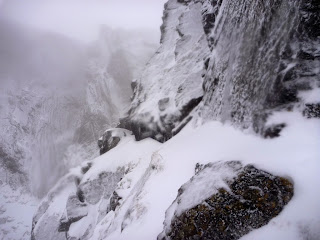 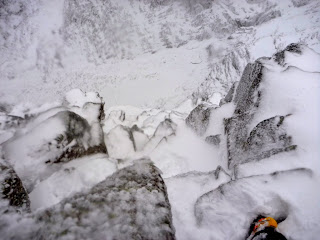 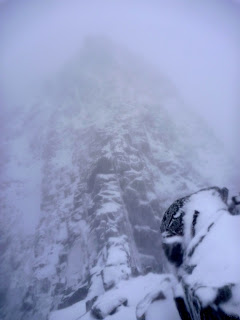 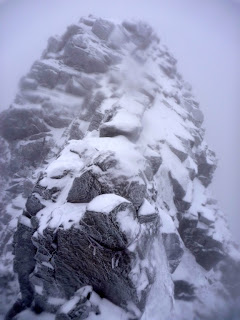 The rain was beating on the roof at 6.30am again this morning but glimpses of the tops yesterday confirmed that it was snow higher up so eventually I prised myself out of bed and threw a winter sack together.
It was a shock to the system carrying 30m of rope, a light rack, axes and crampons up from Torlundy but at least the weather held off this morning.... relatively speaking of course- just the odd shower. I bumped into a staff team from the Clachaig heading for Ledge Route and it took a bit of teeth gritting to head on for Tower Ridge when they turned off.
The snowline was just above the CIC hut and from the word go I was hitting drifts of wet snow mid calf deep. With worse weather forecast as the day went on I sweated a little up Observatory Gully to avoid the first chimney by the 'back door' that bring you more easily onto the Ridge just above it. The moment I got on the crest I started slipping and sliding. Compressed wet snow and even a cladding of 1cm thick ice adhering to the steeper windward rock made the going a bit sketchy from the word go. Crampons on then.
The Little Tower passed in a slippery thrutchy blur, the snow useless and the ice thawing and often detaching from the rock when given a quick scrape. But a surprising amount around nonetheless. I didn't see bare wet rock very often.
The Eastern Traverse wasn't the first deep drift but was well banked out and required a little wading. Then climbing up the side of the Great Tower on icey rimed up rock felt like proper winter... sketchy, slippery and nervey with a spindrift of hail pattering on my helmet!
Tower Gap beckoned but as I pulled onto the Tower the wind picked up, the vis dropped and the hail made it hard to look up. I put a rope on to ab into the Gap. It obeyed Murphy's law of climbing tangling on the axe hanging from my harness as I left it on to protect my slither out the far side. Picture me bridged above Glover's Chimney holding on with one hand trying to flip the rope off of my tool with the other in a strong wind... F*@kity, fu*%!ty, f!*k!
Out the other side it was more deep snow hiding the footholds to the plateau where the wind picked up and I regretted leaving the goggles out as the hail began to give me a cheap exfoliation treatment.
I caught up with the James and the Clachaig team back on the final descent to Torlundy having seen a surprising amount of people on the pony track (mostly quite well equipped fortunately). Then it was onto the bike for a quick cycle home.
It will come and go in the next month but proper winter made an early appearance today. There was dripping going on on the Eastern Traverse but above that was properly cold- the snow changed consistency, the ice clad rocks accepted a frontpoint or two and the hot aches paid a brief visit to my fingertips. I doubt that No.3 Gully Buttress is thoroughly frozen where there is turf but rock exposed to the NW at 1150m was properly wintery today. All change again with a mild weekend forecast though.
Posted by Alan at 18:08