Swinging around with the Stone Monkey 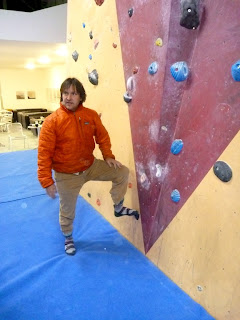 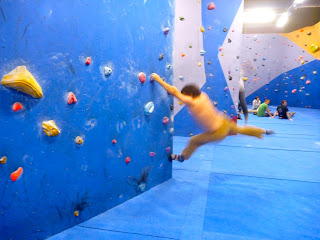 Moving differently... his next handhold is the big yellow sloper on the left of the shot!
I just spent the evening with Johnny Dawes at TCA Glasgow on a climbing movement workshop... and movement is the right word!
The Original Stone Monkey and a real climbing legend his approach to climbing initially seems radical... bizarre even... but it obviously works for him! Over the couple of hours though listening to him talking about 'what how and when', 'end shapes' the 'face' you have have on a climb, the 'voice of a move' and trying various problems he set, I could see a truly organic approach to the same themes many climbing coaches work with (only he is MUCH better at applying them than most of us). I recognised a great deal of what I would think of as 'use of centre of gravity to generate momentum'- and not just in 2 planes but rotational too. Lots of 'deadpointing' to get to places. A huge amount of focussed 'visualisation' and work on the importance of 'perfect practise'. All delivered in his own unique style. Open your mind and try a workshop and you might be surprised.
The climbers I was on the workshop with... and Johhny for that matter are all a head shorter than me so one problem saw me headbutt a hold that no-one else was near and another saw me scrape my forehead off the wall taking a half inch strip of skin off... who says you don't need helmets at bouldering walls :-)
I've also been reading his book ('Full of Myself') which gives an amazing insight into his climbing and the period of our history when he was at the top of his (and arguably anyone else's) game. It's not always easy reading (like his ideas on climbing- so natural to him that they are hard to communicate to clumsy earthbound mortals that they takes a little effort to follow) but well worth persevering with to learn a little about this climbing legend.
He's also a nice bloke and was freely sharing ideas with many folk at the wall, talking to parents about their kids climbing etc.
Off to El Chorro tomorrow... I'll leave you all with the early snow!
Posted by Alan at 22:33

If you desire to increase your experience only keep visiting this website and
be updated with the hottest news posted here.