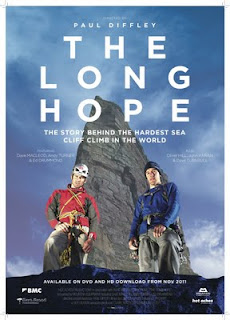 Whilst I was at the Kendal Film Festival I was lucky enough to see Hot Aches “The Long Hope”. I’ve now got a copy of the DVD and if you are looking for a Christmas present for a climber it would make a great choice. Unlike many of the ‘high 5ing’, ‘Xtreme’ films around at the moment it has a bit of soul about it whilst still showcasing some seriously hard climbing.

Dave Macleod’s fascination with the original 1970 aid route climbed by Ed Drummond led to many visit’s to this huge and remote crag on Hoy in the Orkneys before the final successful ascent filmed by the Hot Aches team. To make things even more special they also record the return visit of Ed Drummond to the crag and the climbing is interspersed with Ed’s readings from his atmospheric essay on their first ascent.

Andy Turner makes a great foil to Dave- appearing slightly bemused at what he has allowed himself to be talked into! His description of Dave’s rack is particularly succinct.

Some of the footage is really world class… one shot where Dave is pulling past an overhang with almost the full height of the crag beneath was one of the few pieces of film I have seen that truly captures the exposure of an enormous crag. The crux pitch, E10 in itself is climbed with steely control after the hundreds of metres of E Grade climbing below.

The added extras on the DVD include: an ascent of an E5 on the nearby Mucklehouse wall, an ascent of The Old man of Hoy (good beta for would be ascentionists), Mountain Equipment’s inspiring historical retrospective of 50 years of Mountaineering and “Return to the Indian Face”- the story of Macleod’s successful ascent in 2010 of Johnny Dawes iconic route. This last I though was a great film in itself with comment from both Dawes and Nick Dixon.

Many climbing DVDs I’ve seen are ‘one watch wonders’ with little to go back to but The Long Hope is worth more than that- one to keep and return to.

You can get a copy on Dave's website here.