Bar b cued on Bullroar


Yesterday Heike and I headed to Ben Nevis for the multi-star classic HVS Bullroar. We timed our arrival well with the seeps on the first pitch (some warm-up!) minimal compared to later in the day. Heike got most of the hard pitches but the ups and downs meant that I was often descending through pitch cruxes to ensure I didn't lose out on the exposure. We crossed paths with climbers on Torro and several parties were on Centurion. The higher pitches on  the route were poorly described in both Gary Latter's Guide and the SMC Guide but we persevered to identify the last 3 pitches rather than abseiling off. It was hot throughout the day (Heike put a fleece on in response to a breeze and was regretting that after a pitch). A great route that doesn't pull its punches- plenty of value on just about every one of its 10 pitches.
We headed down Ledge Route and a snowy No. 5 Gully (some slack sling dog leading going on between a couple on the way up??) to the CIC Hut where I Heike's lad was working his first route on the Ben (with some watchful spotting from dad). 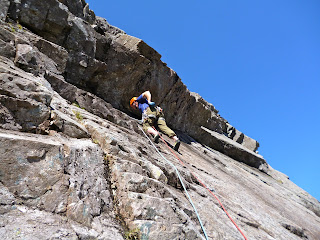 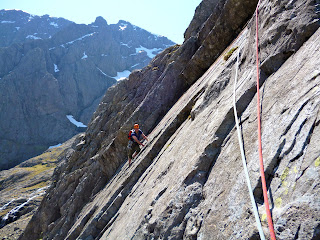 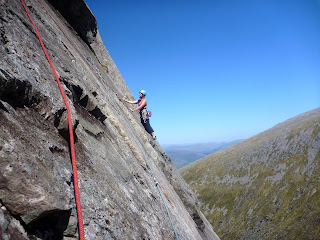 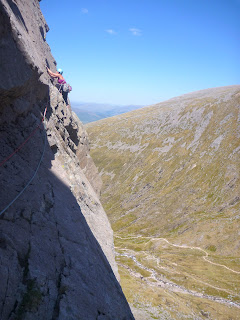 Oh, and I got it wrong yesterday I wasn't entirely alone on Tower Ridge: http://remoteexposure.blogspot.co.uk/2012/05/tower-ridge.html
Posted by Alan at 10:42