So this week I've been working on Ben Nevis undergoing training prior to a week's botanical and geological survey next week.

"The North Face Survey is a three year project led by the Nevis Landscape Partnership, sponsored by Mammut, in collaboration with Midland Valley Exploration and funded by the National Lottery Heritage, Scottish Natural Heritage and The Highland Council."

The key objectives of the project are to:
Along with 9 other mountaineers, 2 botanists and 2 geologists with brains the size of small planets and extremely knowledgeable staff from Lochaber MRT and SNH We've had 4 days of pooled training getting the climbers into gear to identify some critical plant species and other indicator species as well as practise using a smartphone app to capture geological data AND some technical training to get our experts ready to access some tricky areas. Dave Macleod is with us too with his Rare Breeds Productions head on to film the whole project.
We'll be going to the places climbers don't- certainly in summer. So far its been moss, choss, loose rock and flush areas (see, I've been learning new terminology). Our brains has been stretched and pummelled with the key features of a number of plant species that are rare UK wide and my smartphone has been filled with data points from joints and geological contact areas.
We've had a grand workout carting 100s of metres of rope about as well as plenty of trad gear (we are not placing any fixed gear and indeed may remove litter and old tat/gear of questionable vintage as we find it).
Tuesday we were at LMRT's base drawing on their experience of long line lowers from the plateau, ensuring everyone was familiar with some of the gear and techniques we expect to use and bagging the 100s of metres of rope courtesy of Mammut- many thanks to them and LMRT. Then we were learning how to use Midland Valley's App FieldMove Clino as a data capture tool for geological surveying. Finally we were introduce to some of the critical species that makes Ben Nevis so special in the UK as a mountain habitat and some of the indicator plants that might show an area worth coder examination.
Wednesday saw a big load carry to the CIC Hut- thank you to the SMC for their support in allowing us to use the Hut as a base/temporary accommodation. Then we were out with the botanists checking on a couple of accessible known populations of rare plants and identifying lots more we need to know for next week.
Thursday was a day for us to check a few potential venues and give the botanists and geologists some training on the mountaineering rope work we are using to move them around the tricky to access areas of Ben Nevis. In the curse of the day the geologists also managed to capture lots of data and Noel Williams introduced us to features such as the visible deposition within the Ledge Route complex and the botanists had a stellar day with a visit to an already known site with 3 types of rare saxifrage, further populations of the same saxifrages discovered, a new population of a grass that was previously only known at a single site elsewhere on Ben Nevis (a great spot by Will who had only been introduced to the plant the day before) and the first sample of a saxifrage never before recorded on Ben Nevis!
Today was about planning next week and rigging and giving everyone practise on a massive abseil on Carn Dearg. The geologists seemed very pleased to have captured data over such a huge height range and everyone got to grips with working on/supervising others on ropes at height on a big crag. The only down side was a wee slip on descent which has left Scott with a dislocated finger (its been reduced and is doing well enough that he'll be out with us next week).
Its been a great 4 days. I've always though my knowledge of local fauna to have been reasonable but I've picked up a huge amount of extra knowledge this week. Likewise my understanding of the geology of Ben Nevis has been greatly enhanced. The chance to already visit spots on the North Face I've often looked at but never visited has been pretty thrilling already and I'm hugely looking forwards to getting to grips with more of the same on this iconic mountain next week. The team have all been super enthusiastic, sponging up new knowledge, working extremely hard even in poor weather and geeky though it may sound we're super pleased to have added measurably to the experts knowledge of the Ben already! Some of the team out this week are local walking guides who are helping out as part of the safety team (to inform the public about what we are doing and minimise any risk to passersby) as volunteers simply in return for attending the training to expand their own knowledge- great to see such awesome enthusiasm all round from the team!
Again this wouldn't have been possible without: funding from The Heritage Lottery Fund, SNH, Highland Council, sponsorship by Mammut and help from Lochaber Mountain Rescue Team (for use of base and advice and training) and The SMC (use of CIC Hut). also great to be working with friends, colleagues and Midland Valley and Rare Breed Productions.
There are some news items about the survey here:
http://www.bbc.co.uk/news/uk-scotland-highlands-islands-28688334
http://www.mcofs.org.uk/news.asp?s=2&id=MCS-N11471&nc=Landscape%20Matters
http://www.ukclimbing.com/news/item.php?id=69101 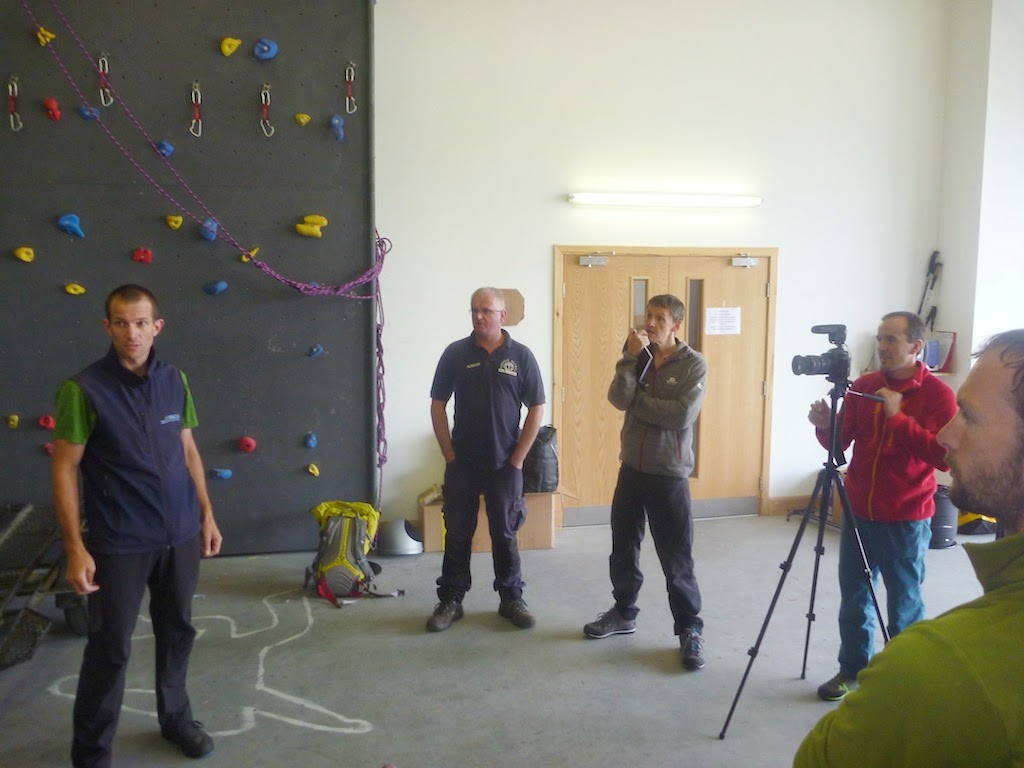 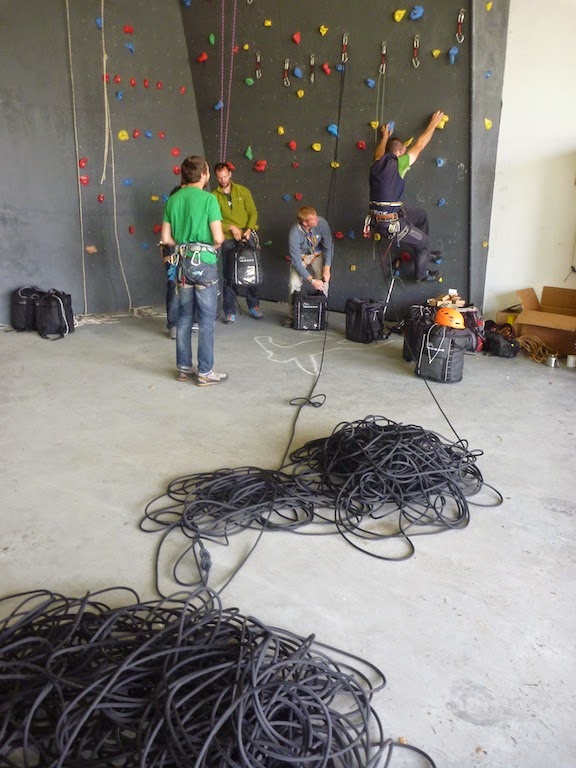 1 of the big ropes 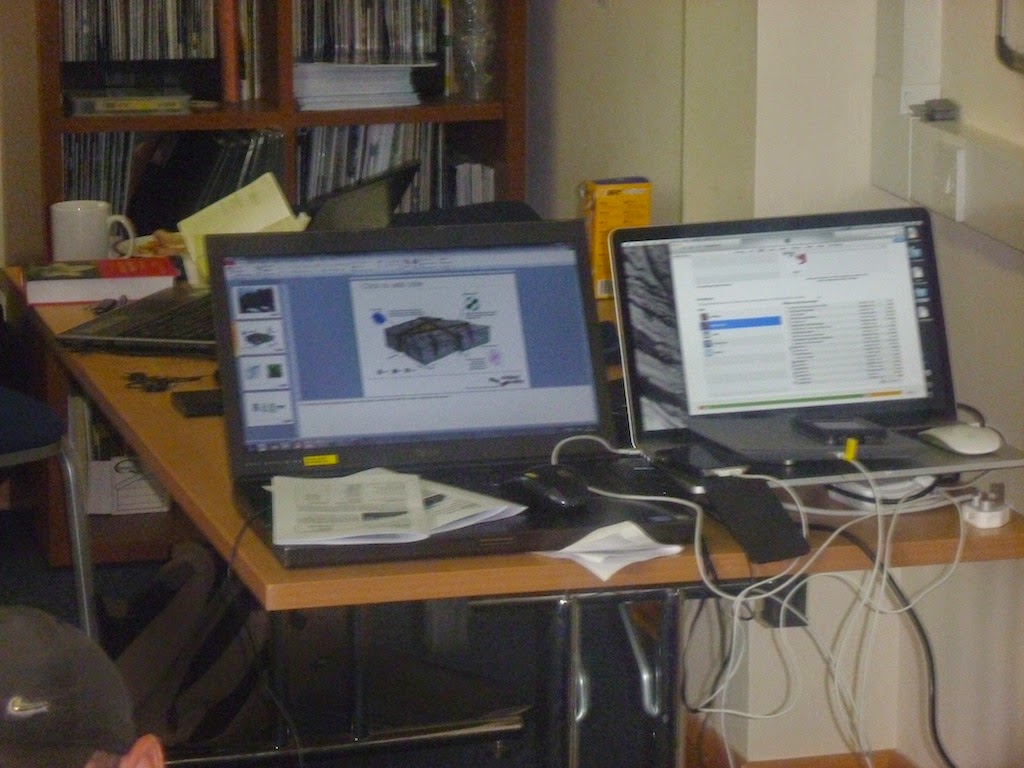 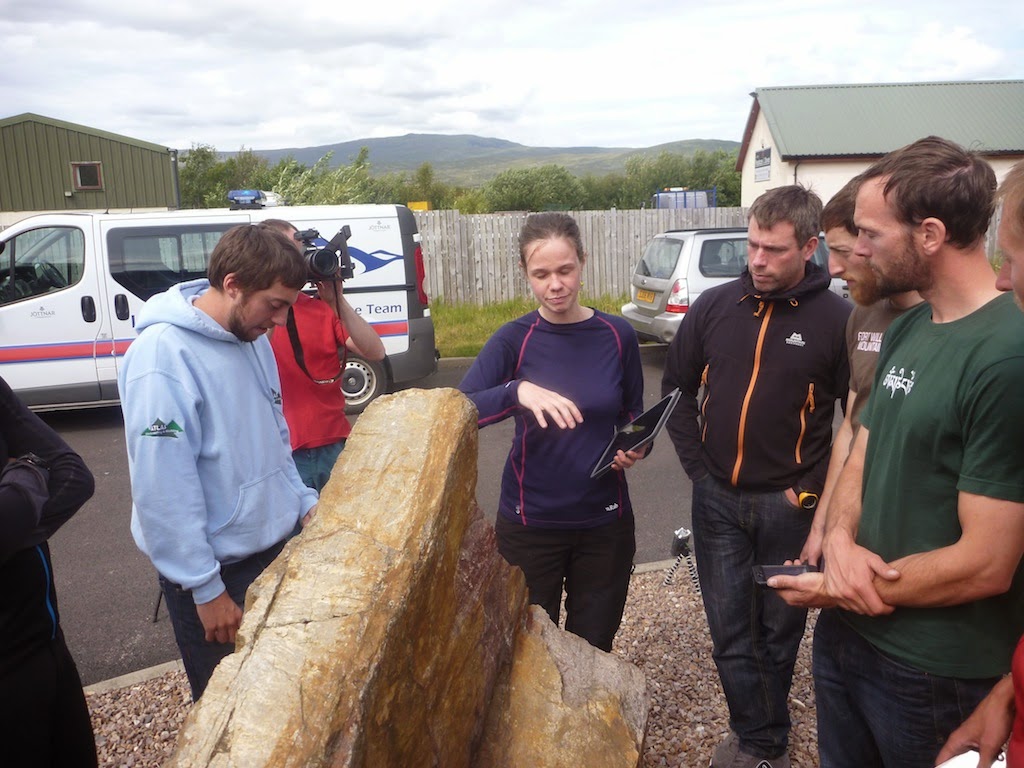 Jenny educating the mountaineers about rock 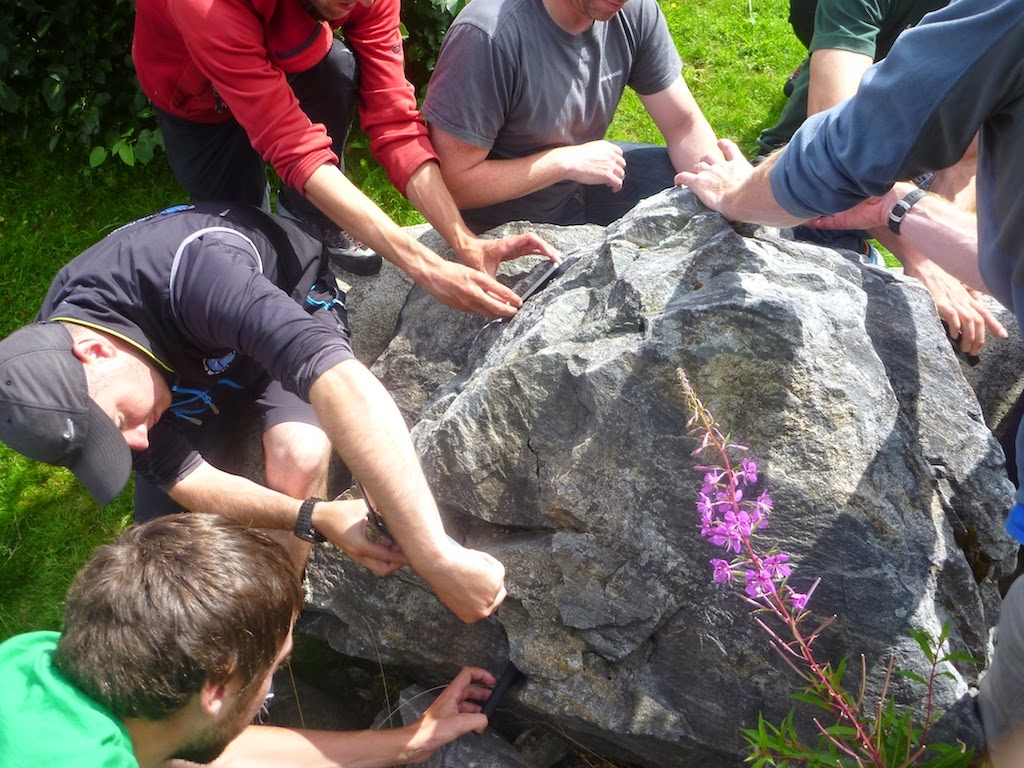 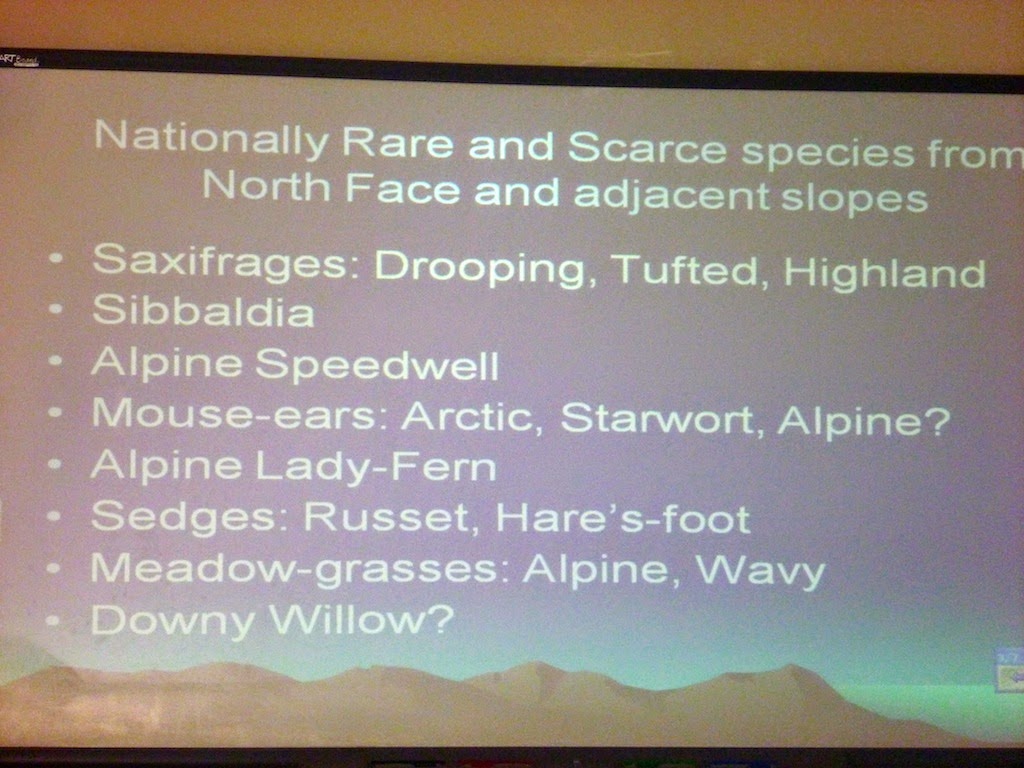 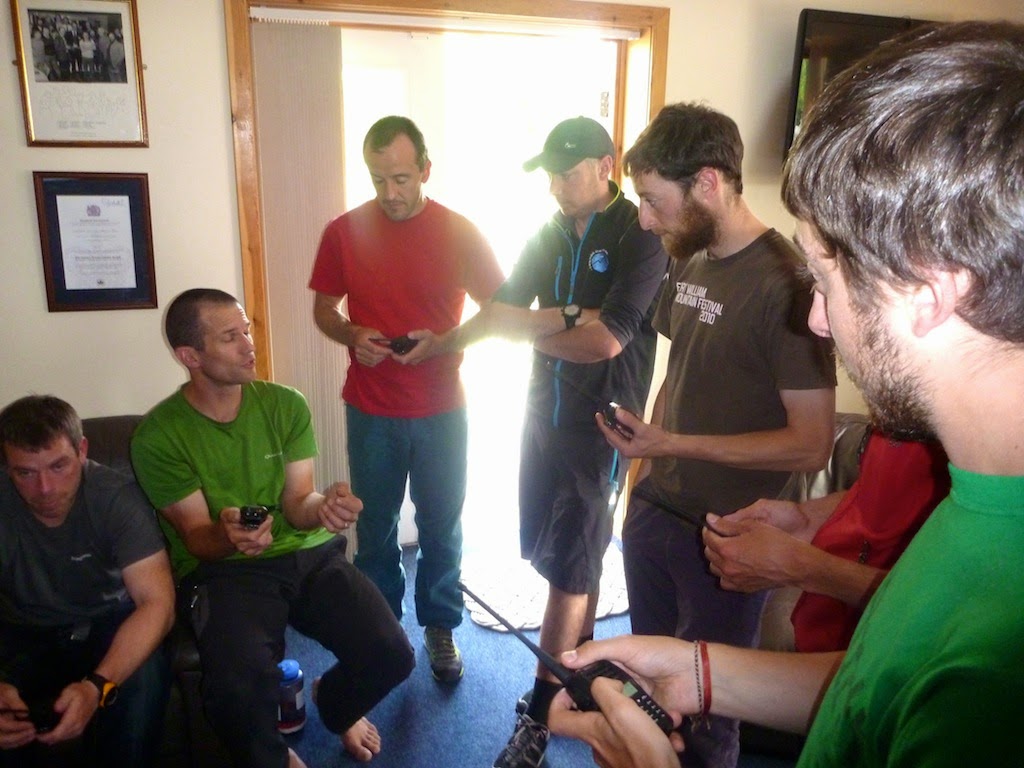 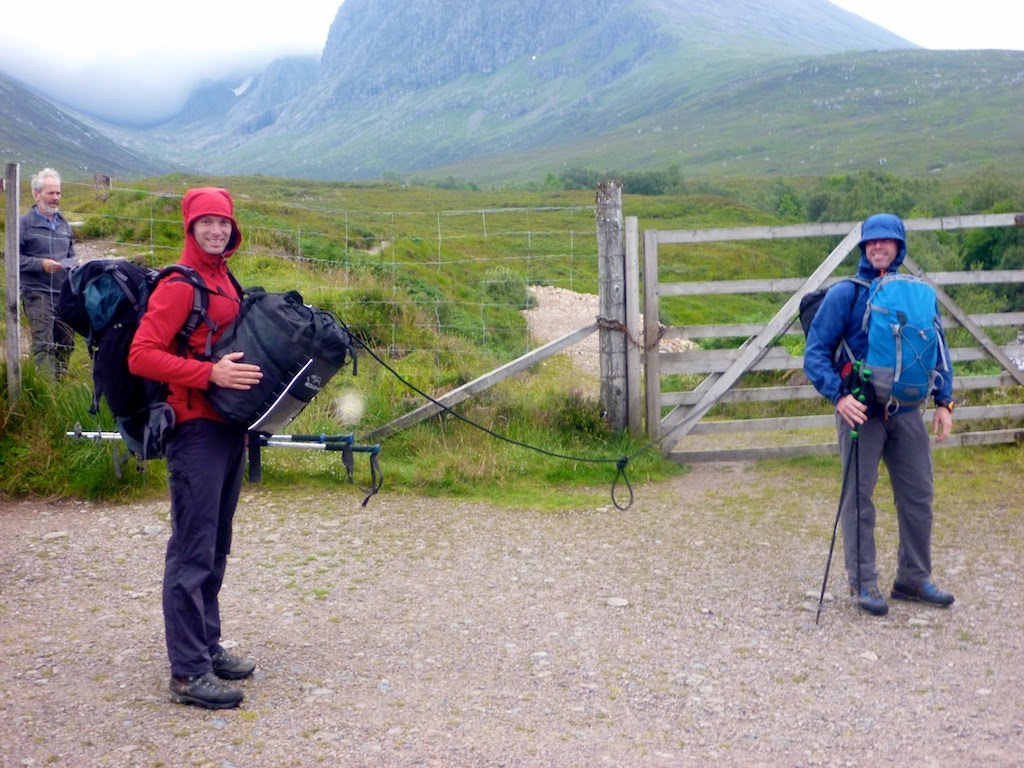 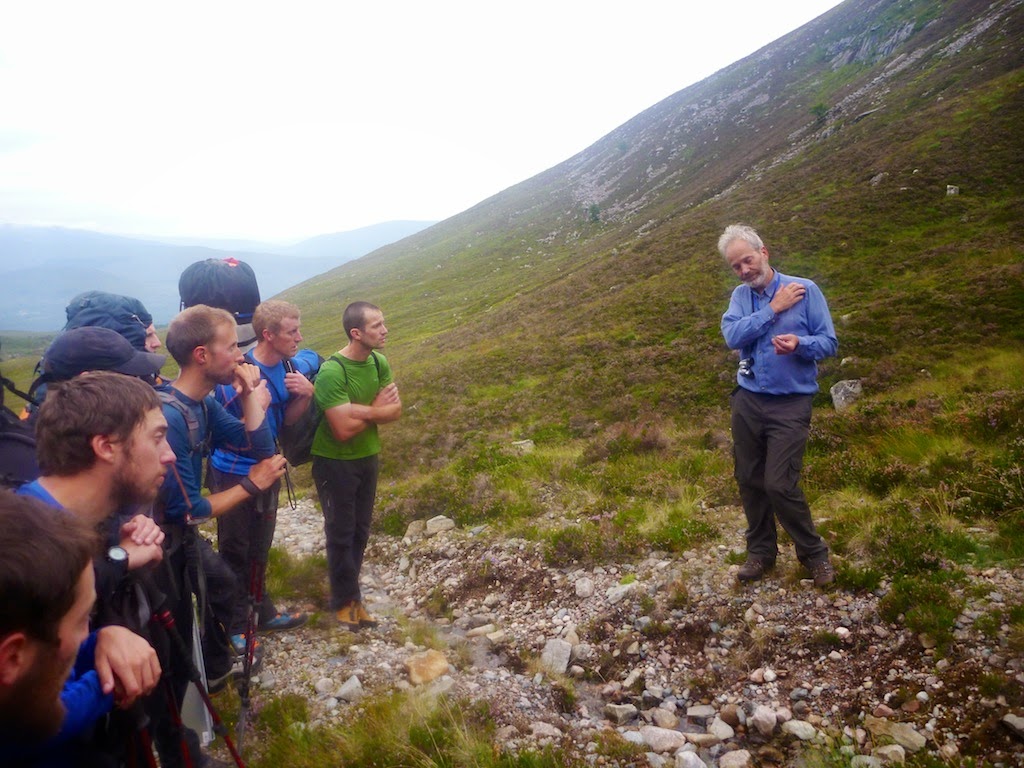 Ian educating the mountaineers about plants 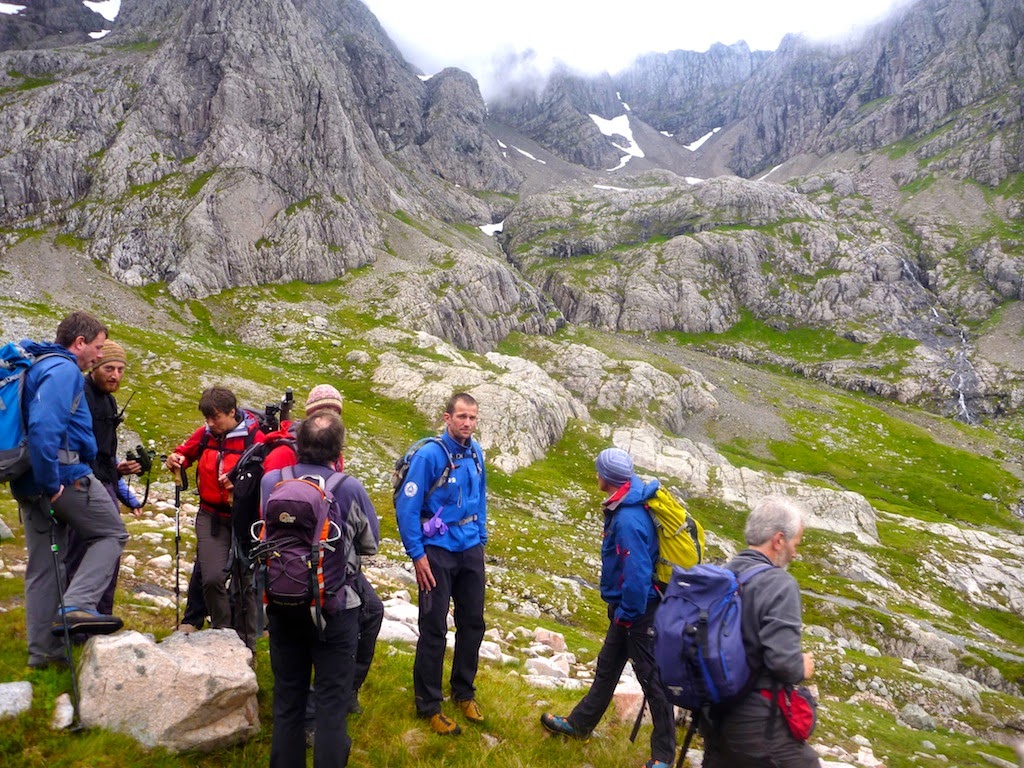 Getting out on the hill 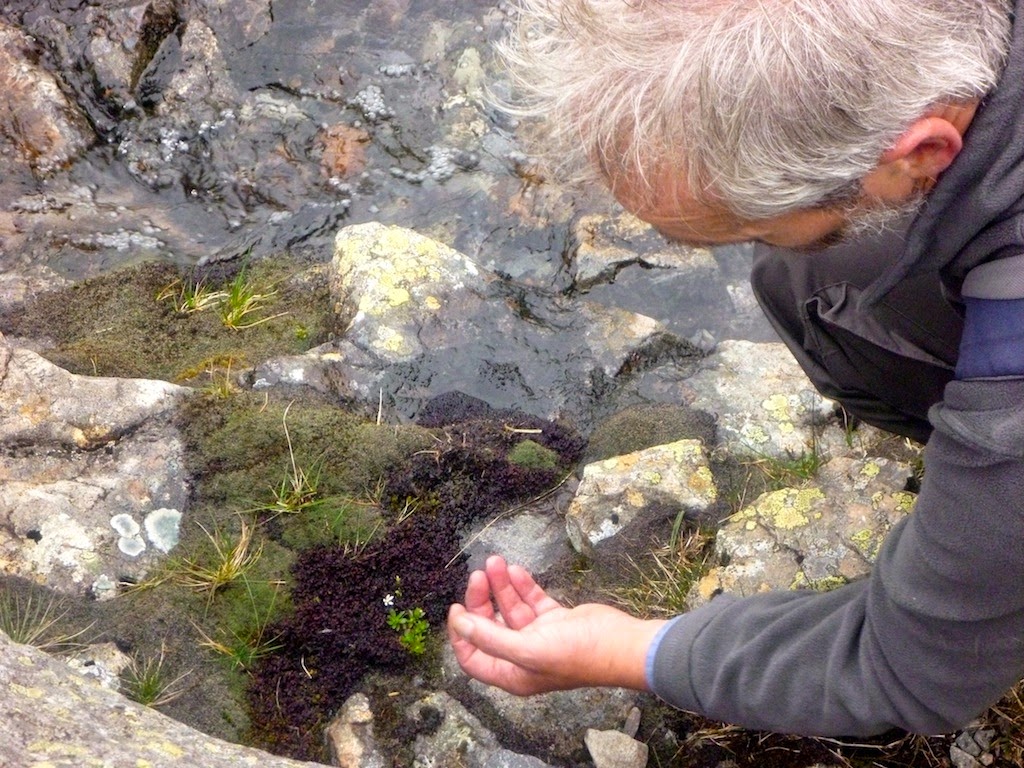 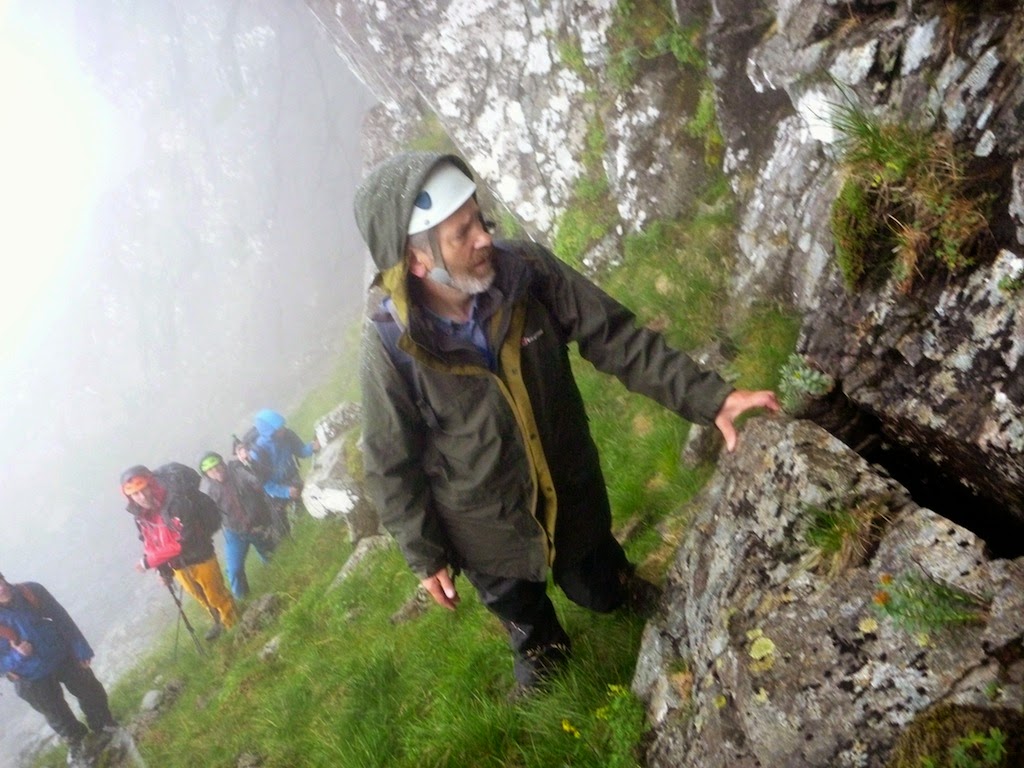 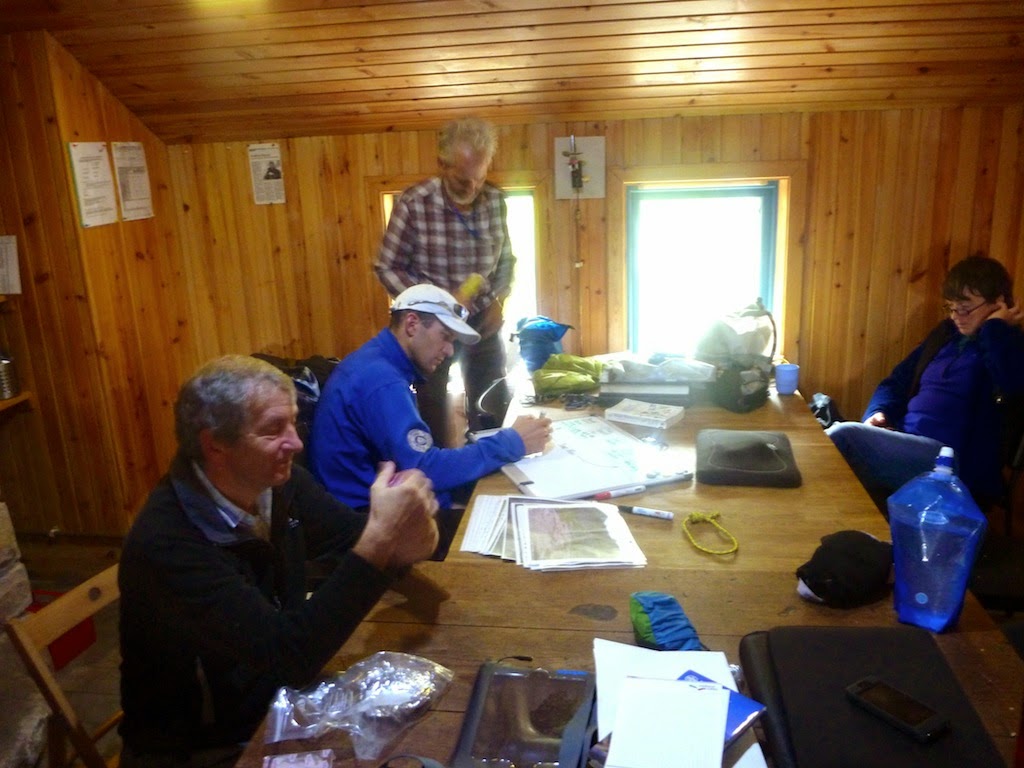 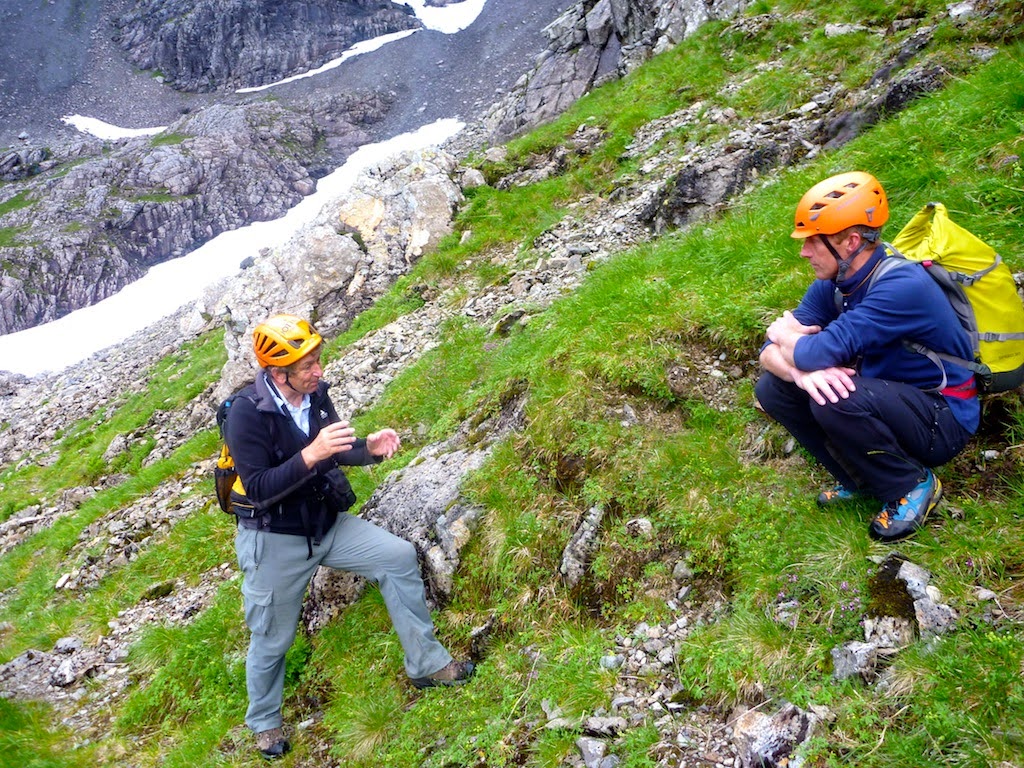 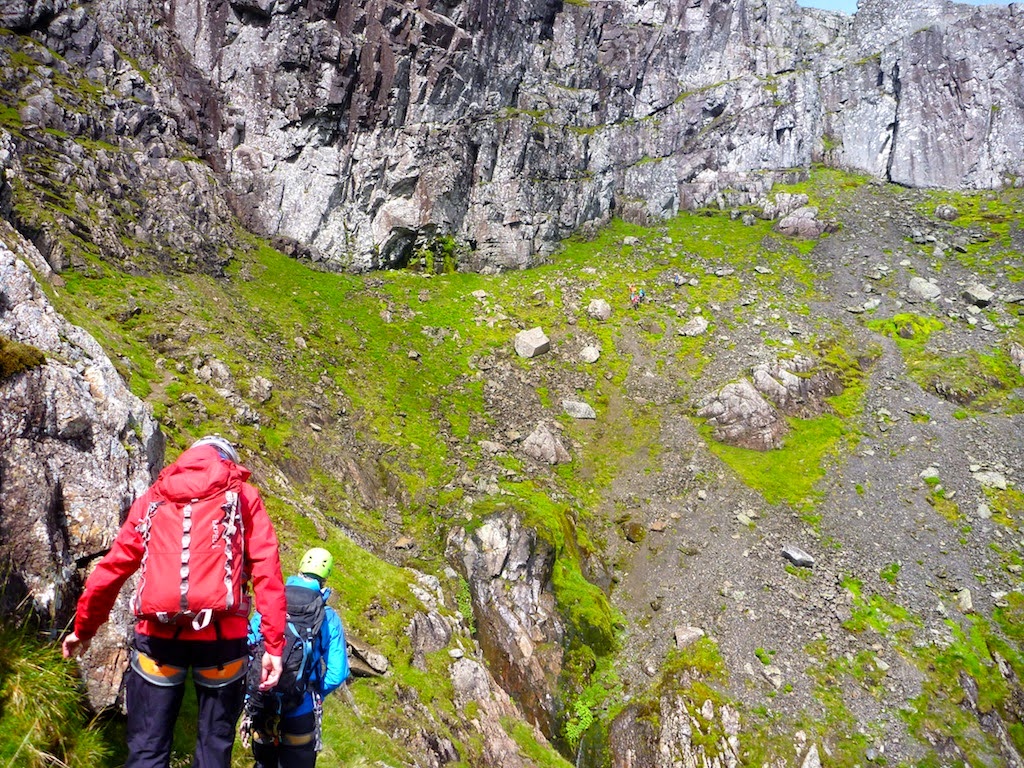 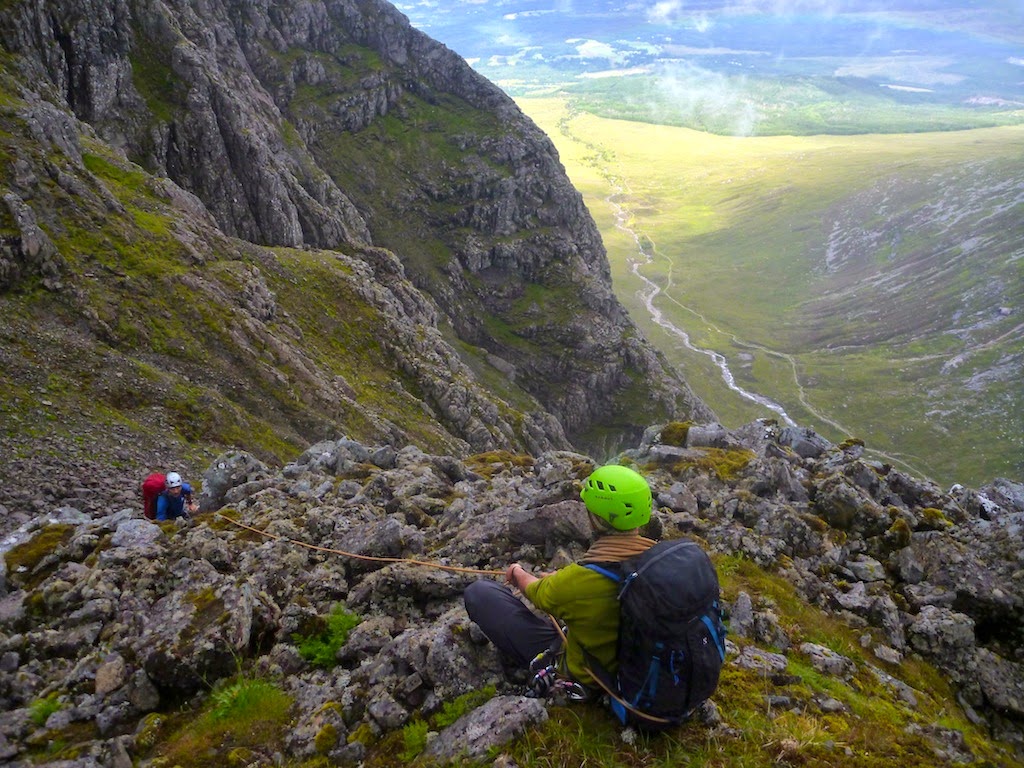 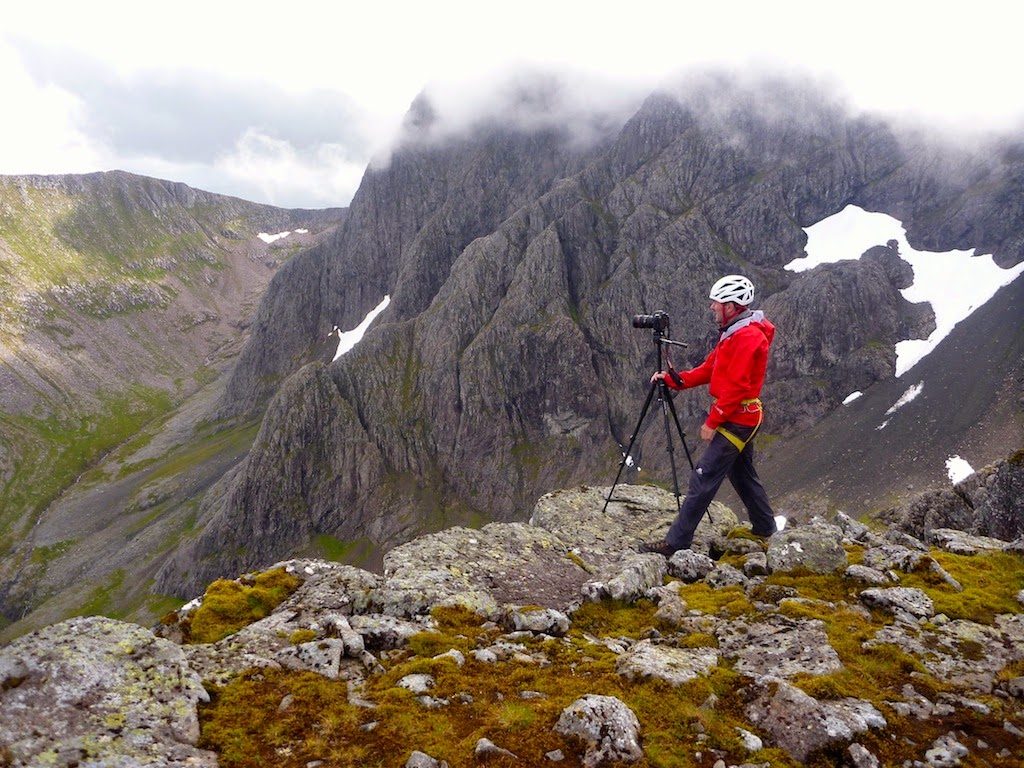 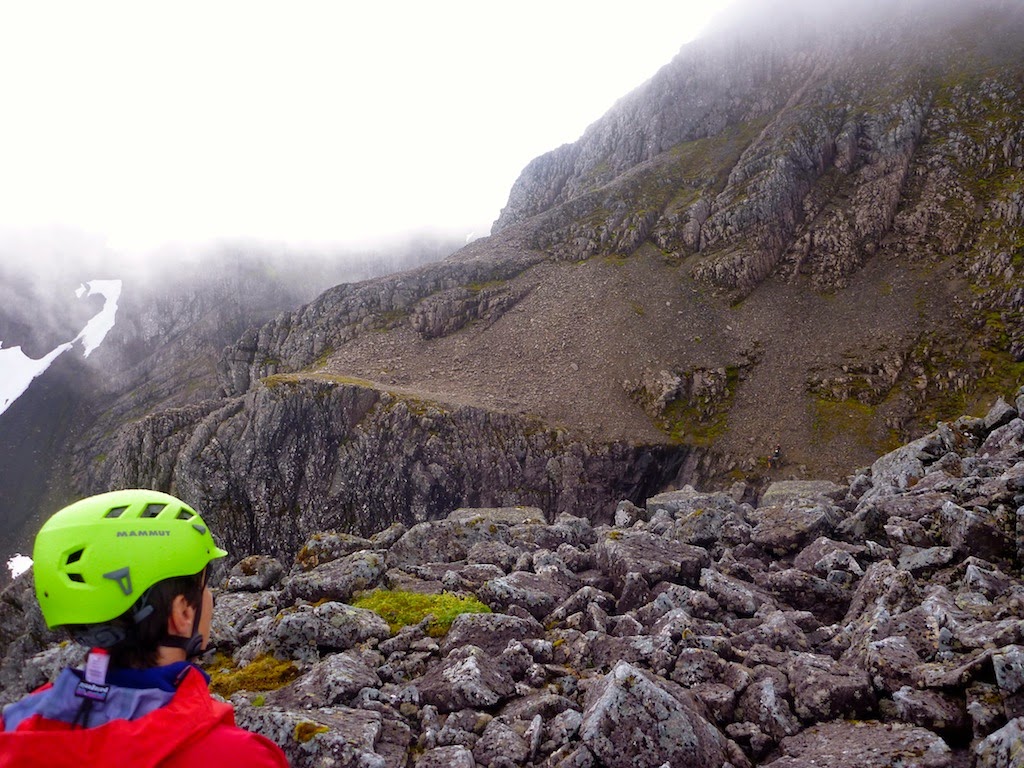 Botany team across No. 5 Gully 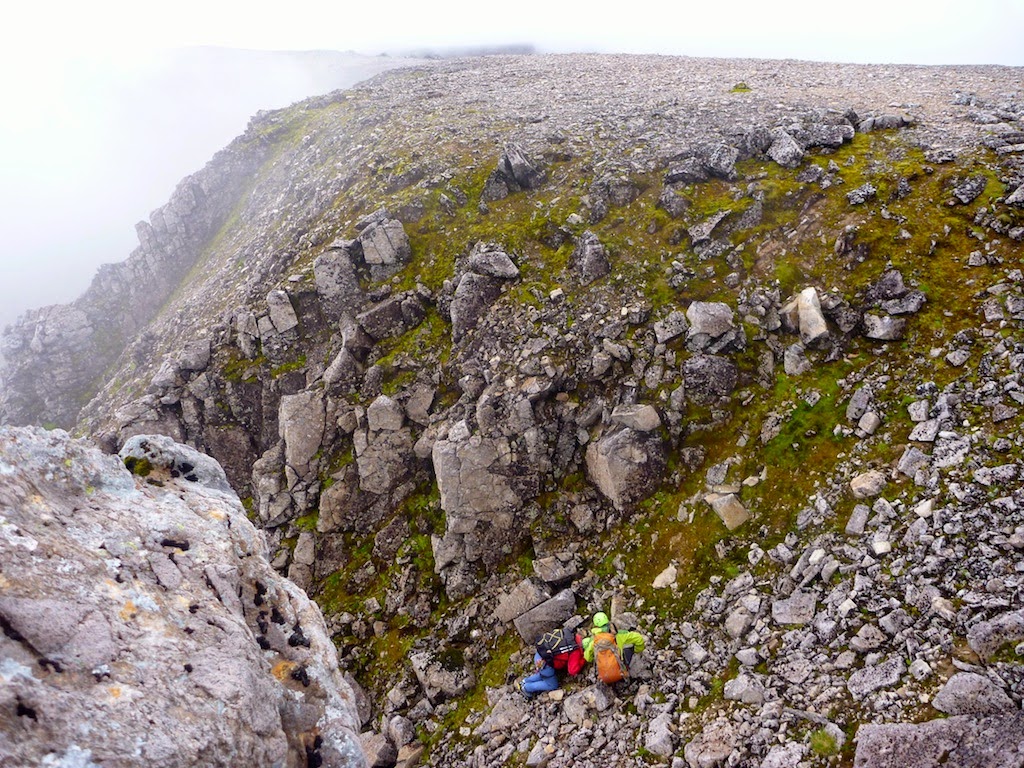 Dipping into a gully on the plateau rim 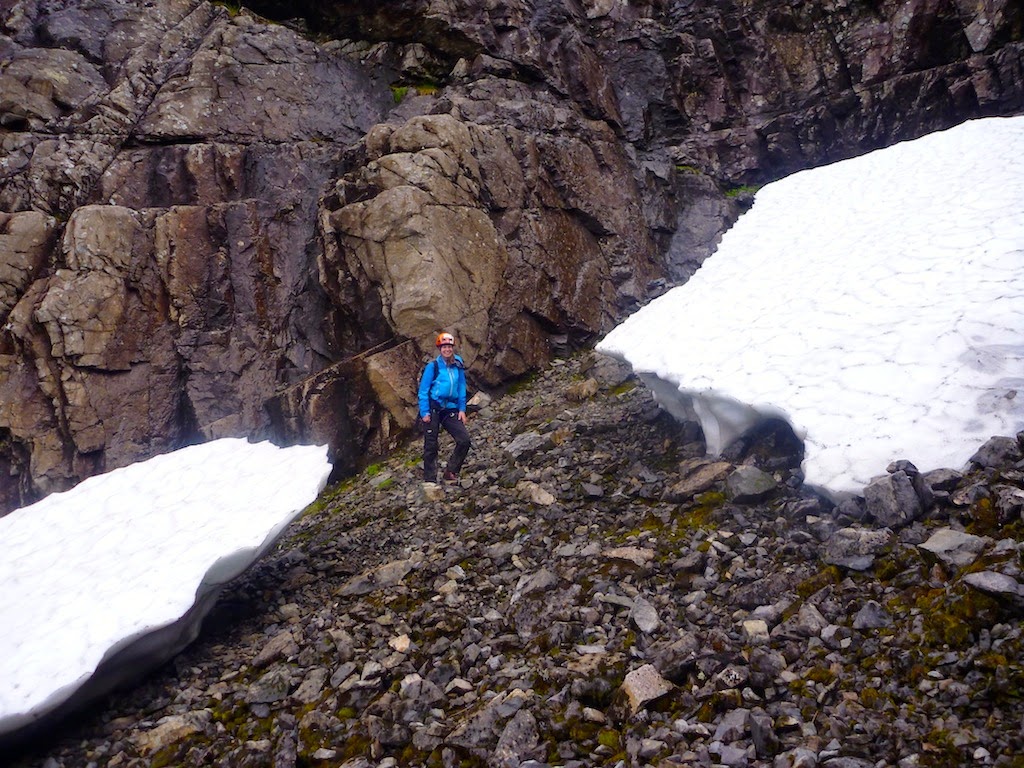 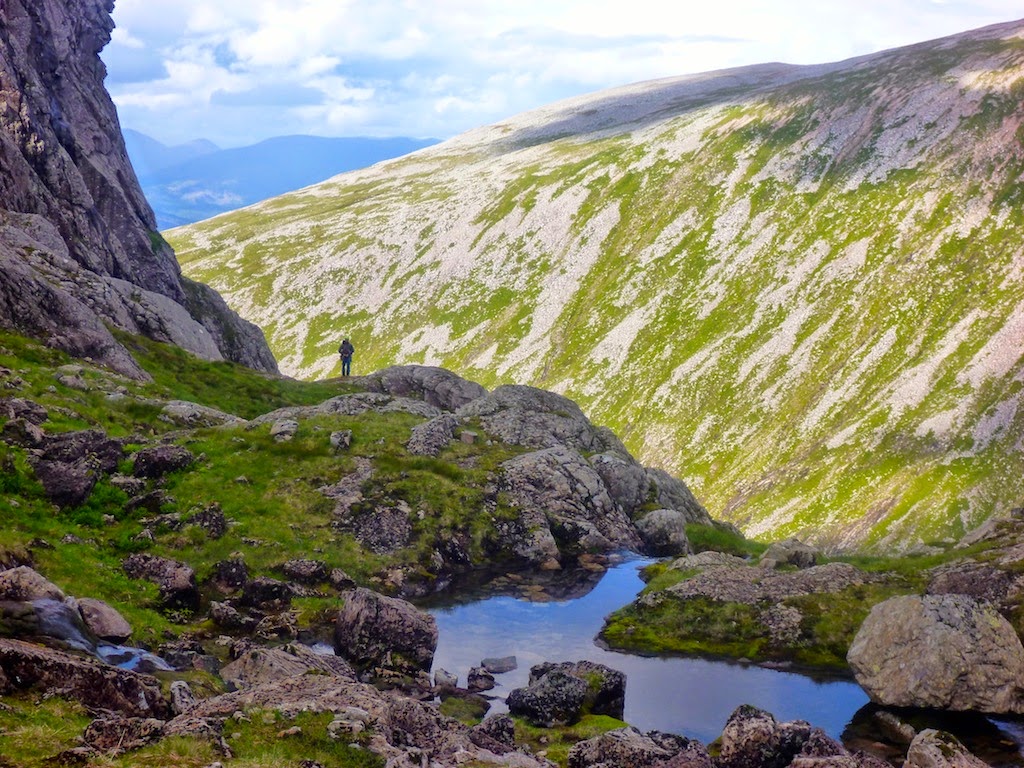 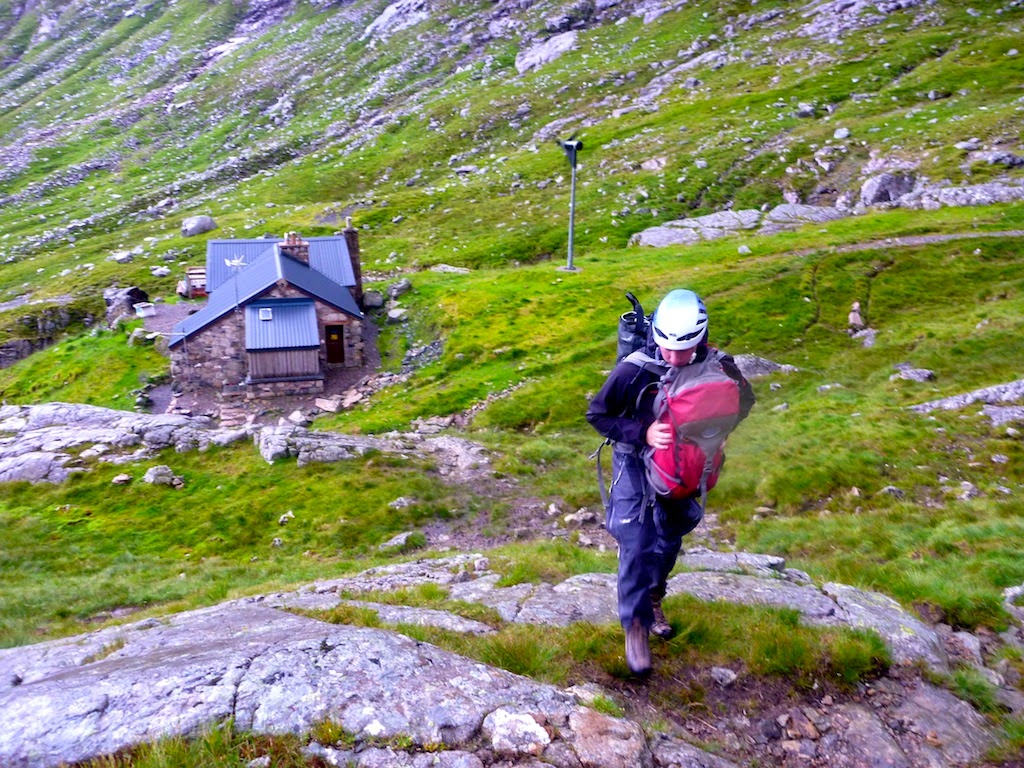 Craig with a big load heading up 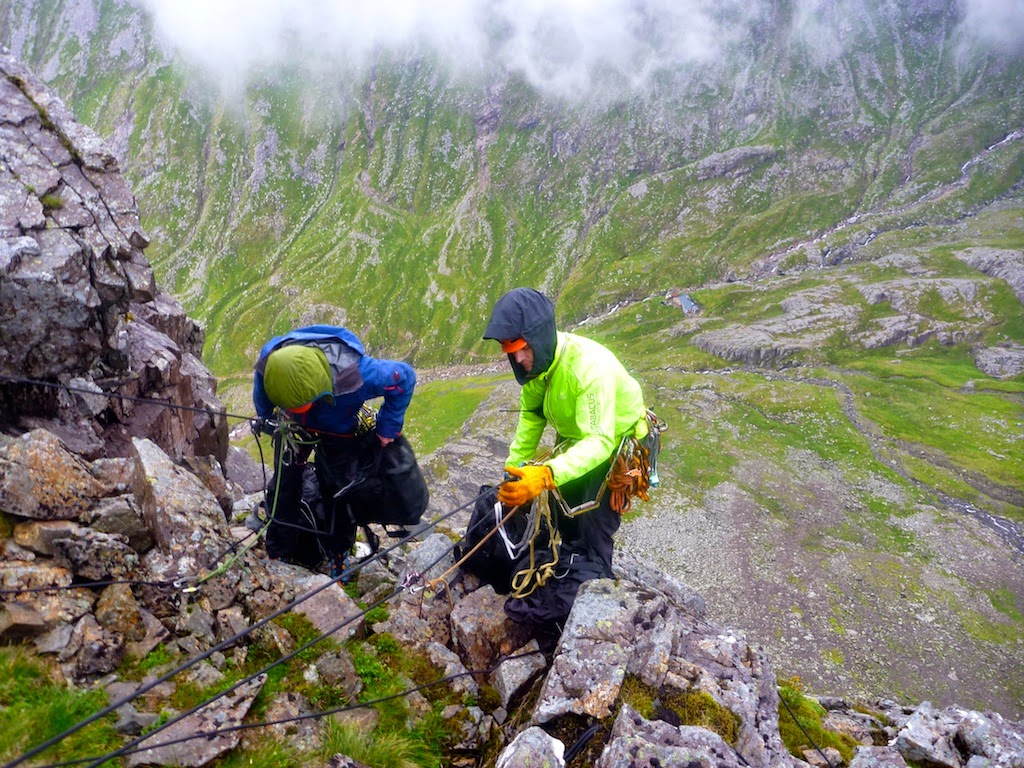 Mike and Donald getting ready to go over the edge 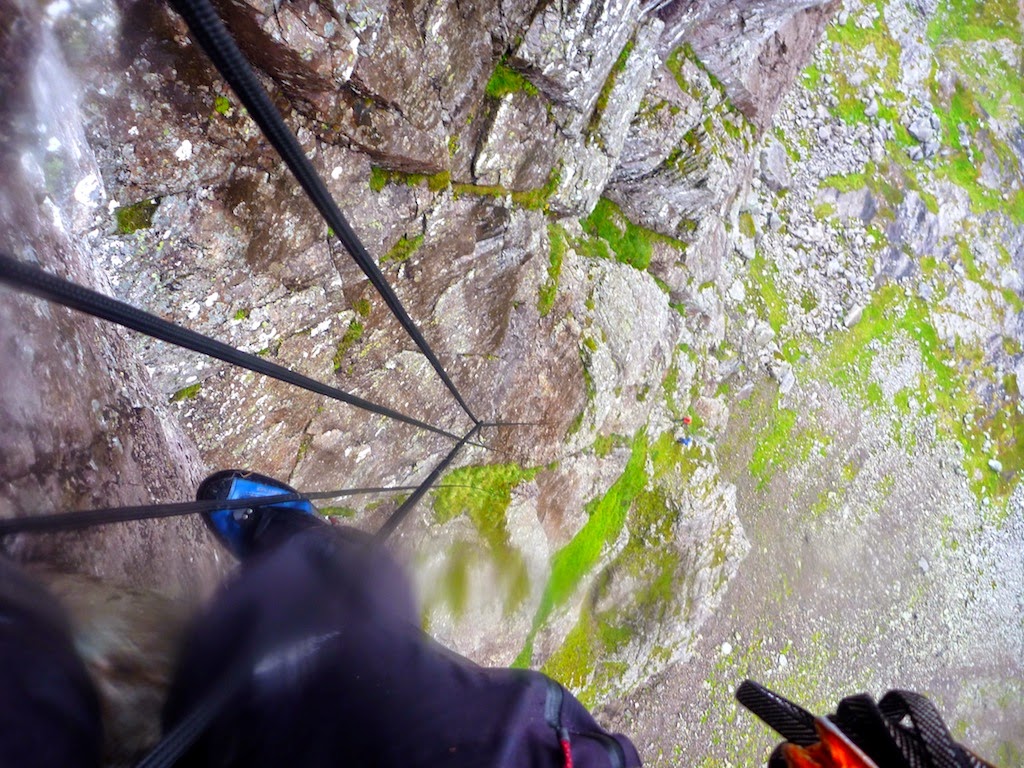 Quite a long way down 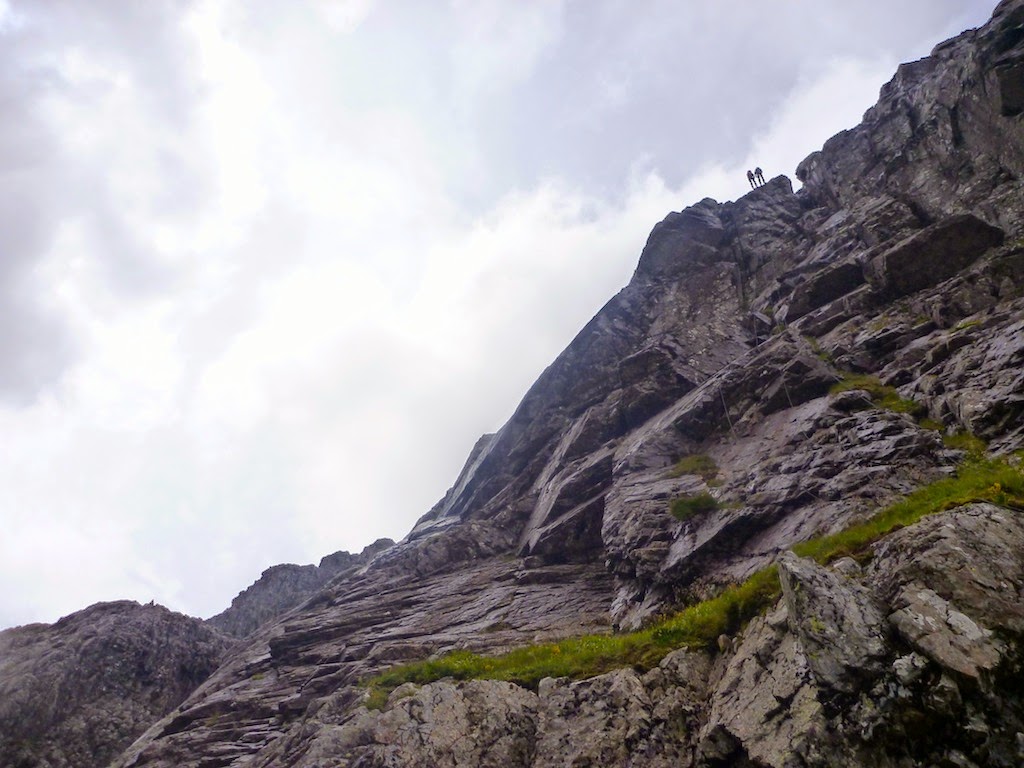 Top of the abseil today 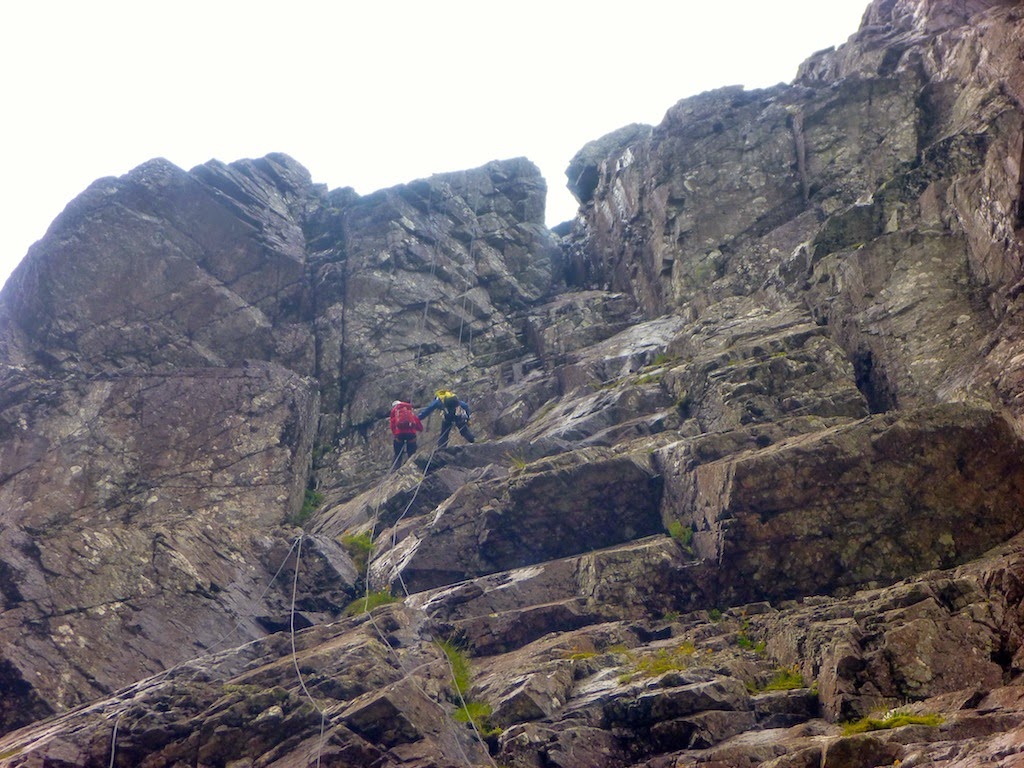 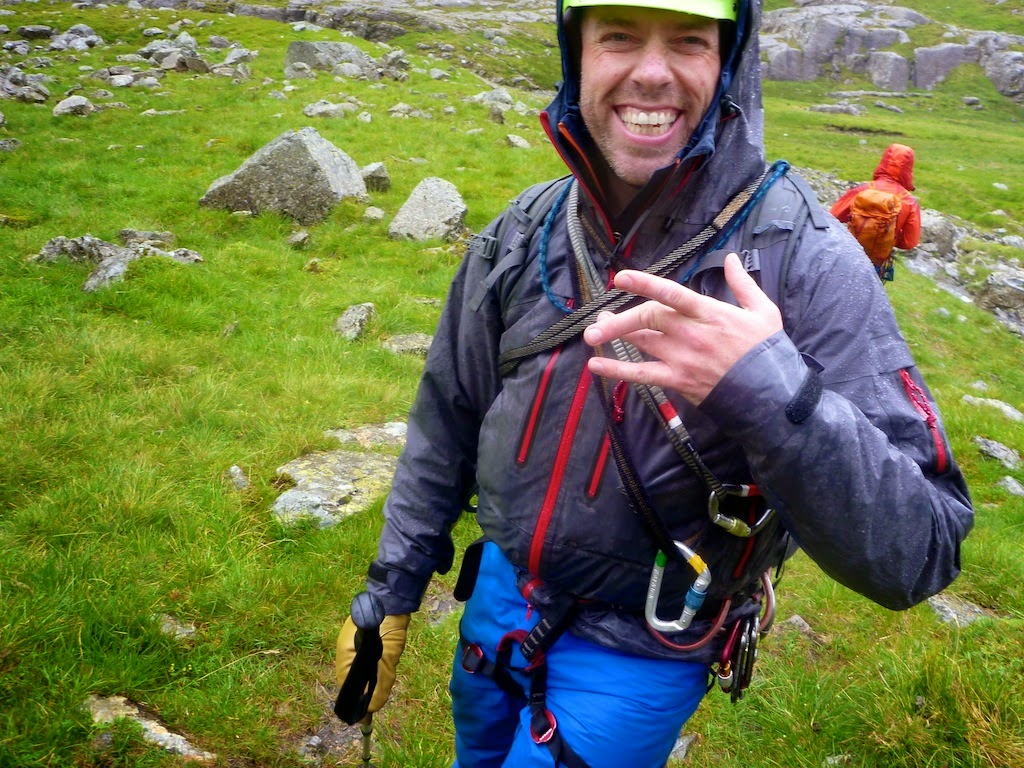 Its only a little dislocation. Scott smiling through his discomfort- don't worry, he's ok!
Posted by Alan at 21:06