For the last week I've been part of a team of mountaineers, mostly members of the MTA, AMI assisting with a major survey of Ben Nevis.
The North Face Survey is a three year project led by The Nevis Partnership, sponsored by Mammut, Scottish Natural Heritage and The Highland Council.

The key objectives of the project are to:

I live at the foot of Ben Nevis possibly the grandest mountain in the UK. Its big, rugged, impressive and has a wild northern side with the perfect viewing gallery in the shape of the Carn Mor Dearg arete. It attracts enormous numbers of people seeking to reach the highest point in the UK and mountaineers seeking to test themselves in summer and winter. I'm lucky to get to work and play there.
Part of my work includes educating and enthusing those I go to the mountains with and when I was asked to be part of a team responding to the Survey tender process for mountaineers to work alongside botanists and geologists I was keen to be involved to learn more about 'The Ben' and its natural history both to pass on the knowledge to others and for the purely selfish reason of wanting to know more.
Last week we got to grips with the actual work of the survey despite 4 days of classic west Highland weather. Following on from the 4 days training it was great to feel the infectious enthusiasm within the team to get to places no mountaineer in their right mind would visit in summer just to see what's there!
My week:
On Monday 3 of us went to the broken ground right of No.3 Gully and hunted for botanical finds across to and up North Gully- wanting to compare this ground with No.4 Gully the home of 3 (and after our discovery last week of Alpine Saxifrage now 4) types of rare Saxifrage. We found a very different habitat from No.4 with some interesting types of Mousear and cleared a lot of manly abseil tat and old climbing hard wear from the base of the crags.
On Tuesday I was round below NE Buttress and was joined by Chris Sleight from BBC Radio Scotland Out of Doors (his interviews were broadcast on Good Morning Scotland on 15 Aug and Out of Doors on 16 Aug - minute 44.42 secs). We trawled the grassy ledges below the traverse to the first platform on the Buttress and then headed round onto the lower flanks of the Brenva face finding similar habitat as the day before.
On Wednesday whilst Landward were filming teams abseiling down the end and Tower Face of the Comb 3 of us were carefully moving around the top of No.5 Gully and were successful in finding a large colony of Highland Saxifrage. Then we headed to the top of No.4 Gully to make a final count of individual plants of the Saxifrages there.
On Thursday my team was one of 2 that went back to The Comb to derig the abseils from the day before and strip the ropes. We abseiled down the face of No. 3 Gully Buttress taking most of the equipment back to the hut.
On Friday I again abseiled No.3 Gully Buttress to remove the last of the ropes and made a quick survey of the base of Green Gully finding more Highland Saxifrage before helping a family who had come a little too high into Coire na Ciste and misplaced Ledge Route get back on track.

During the week the teams surveyed a large number of areas finding many new colonies of nationally scarce plant species in particular saxifrages, grasses and mousears. They were often busy helping botanists to visit and explore areas previously unsurveyed in summer. On the geology front we all made use of Midland Valley's FieldMove Clino App to record both botanical and geological data points and Roddy the geologist found plenty of evidence to be mapped onto a 3d model of Ben Nevis to give a clearer geological picture of the mountain. This evidence may well challenge the accepted model of the Ben's formation. The well known caldera collapse theory does not fit with some of the data recorded at contact points between rock types and orientation of lava flows. Along with a better understanding today of how caldera's form the 'old' model may need revision and It will be interesting to hear the geologists conclusions. The Beeb end away happy and the Landward episode will screen on 3 October with Dougie Vipond pushing hi comfort zone in some exposed spots!
Dave Macleod was to be found shadowing the teams or dangling on a rope nearby making a film short about this year and gathering footage for a larger work on the 3 year project.
The Instructors were having a field day competing for the best finds, working like demons transporting enormous quantities of ropes around the mountain, guiding the experts to tricky spots and always learning, learning more about the plants, the geology and how the two interelate. At the end of each day we'd gather to discuss what we'd seen, plan the next day and download data from the app. You would see local instructors and leaders poring over botanical textbooks, taking personal notes or showing the experts photos to get confirmation of finds. All of us are better informed about the natural history of the mountain and can't wait to spread the word about what lurks on and below the North Face of Ben Nevis.
Role on next year when hopefully I'll be involved in the second year of the project!
Enormous thanks to Mammut for sponsoring the project and providing equipment. Also essential were support and funding from the Heritage Lottery Fund, Scottish Natural Heritage and Highland Council. On a personal note thanks to all those I've worked with over the week and to those with the vision to mix mountaineers and scientists for a really successful survey.
Finally thanks to the SMC for the use of the CIC Hut as a base and office and the understanding of those who shared it with us. 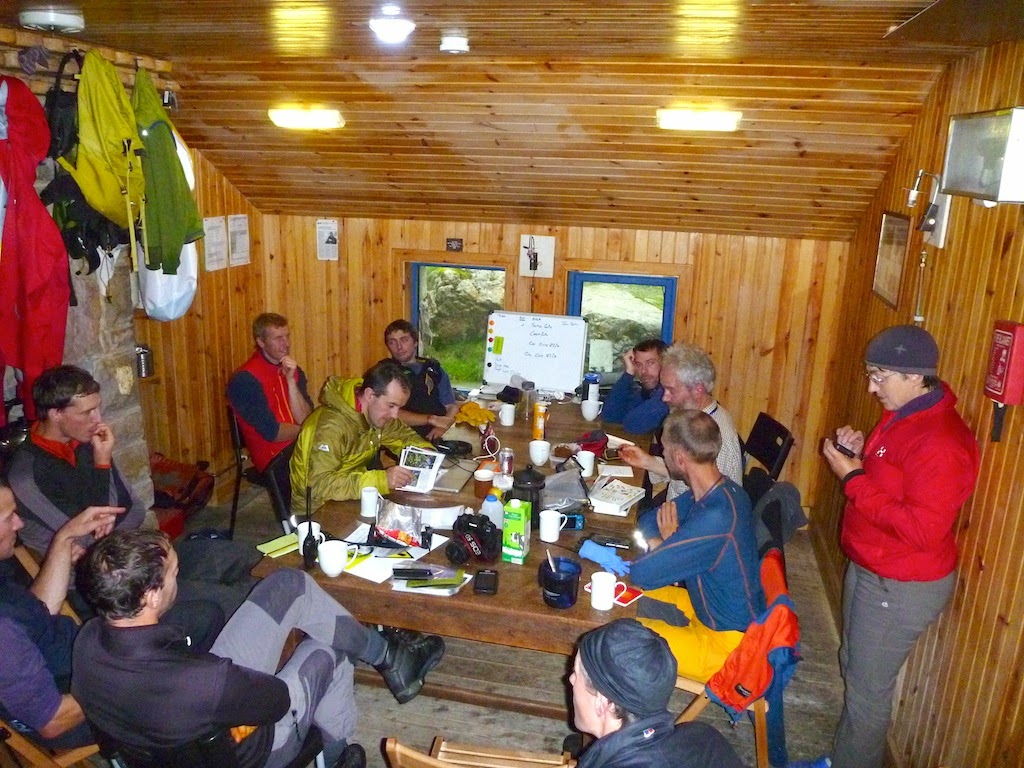 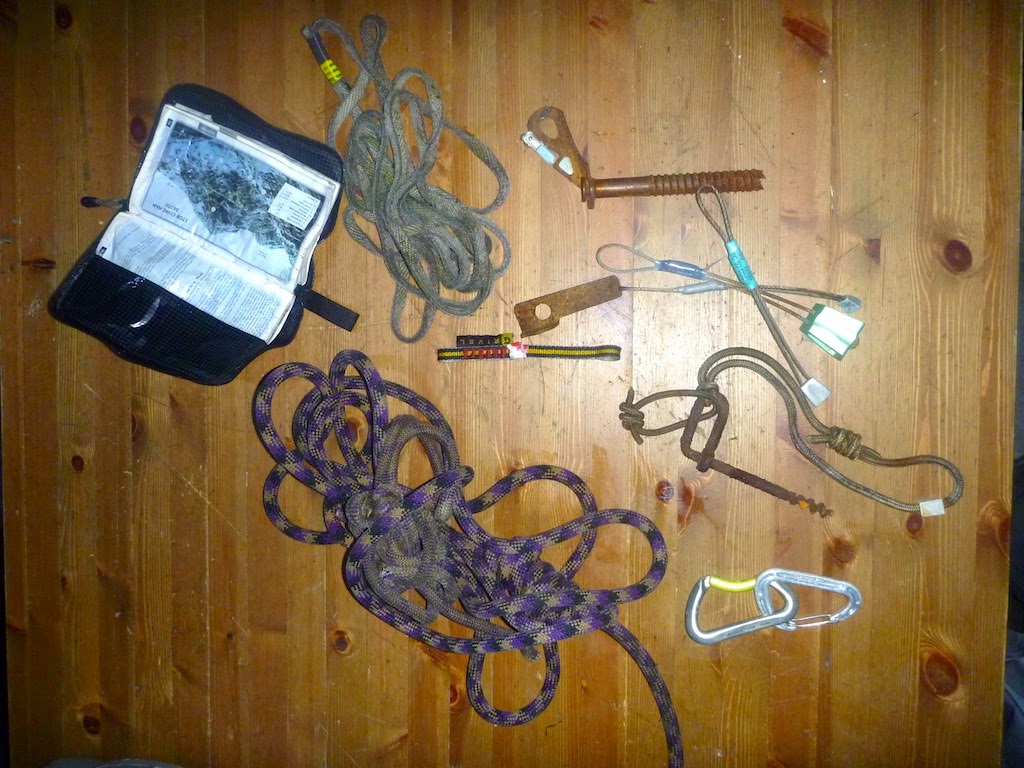 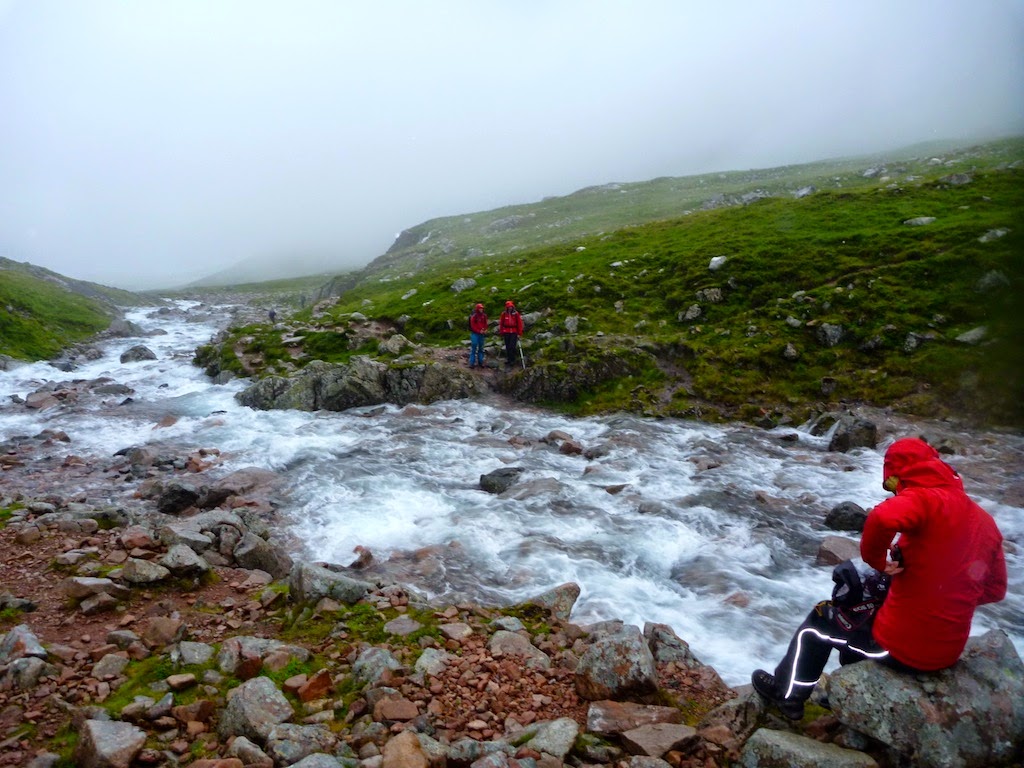 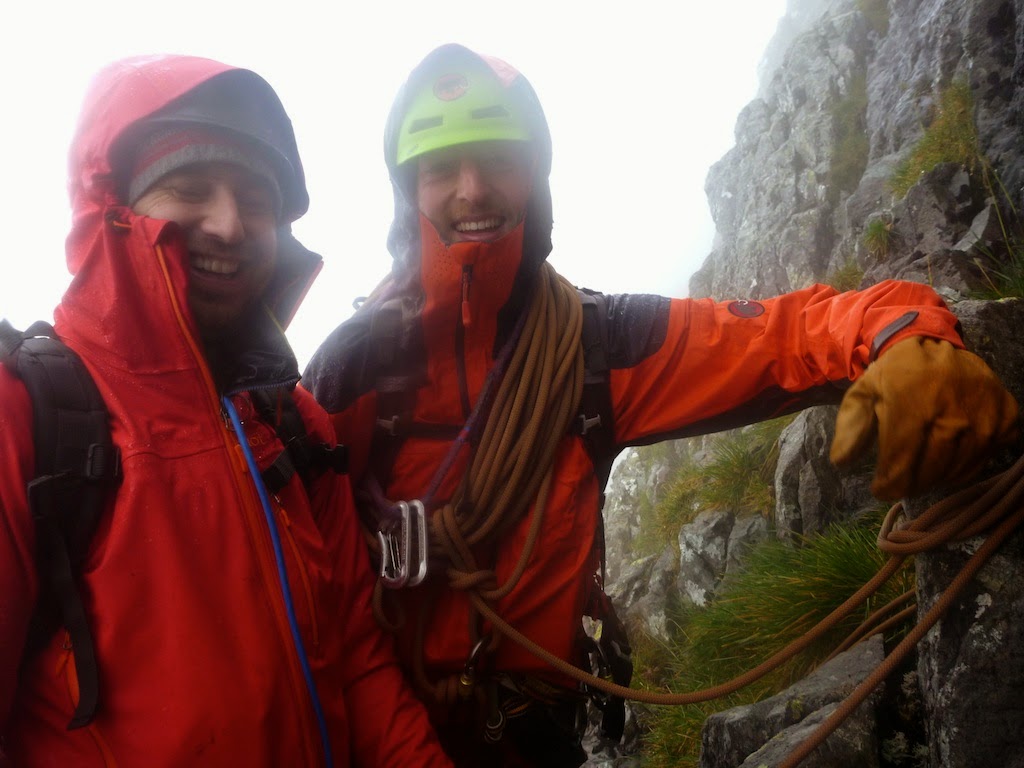 Chris and Will on NE Buttress 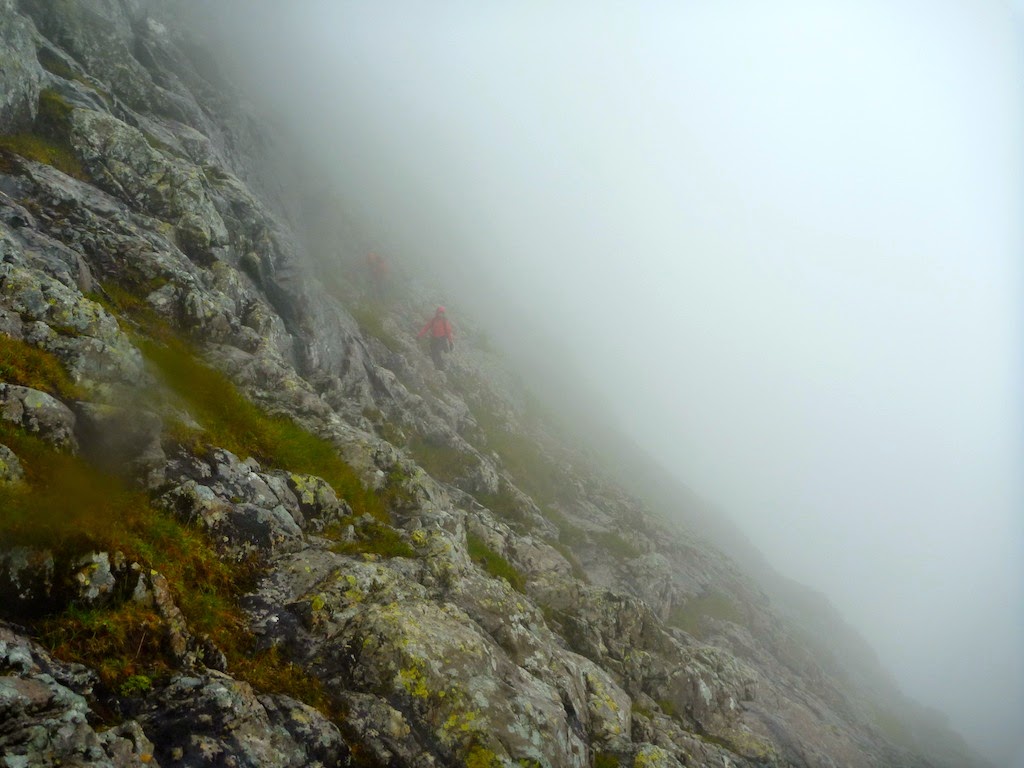 Traversing back from the first platform 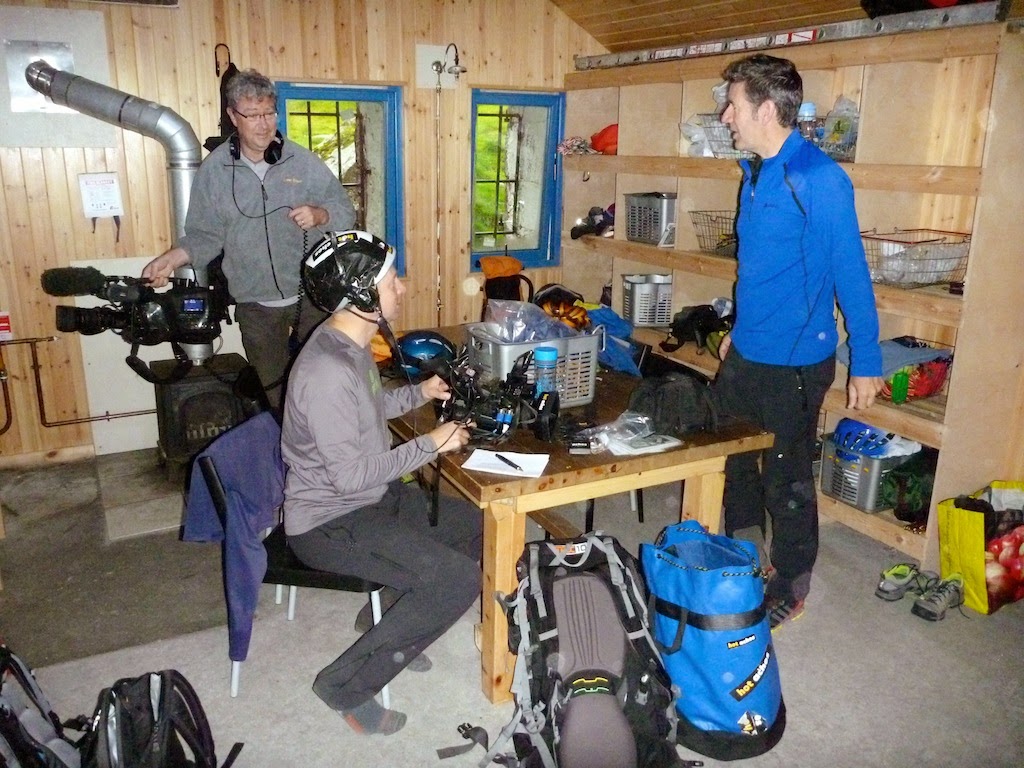 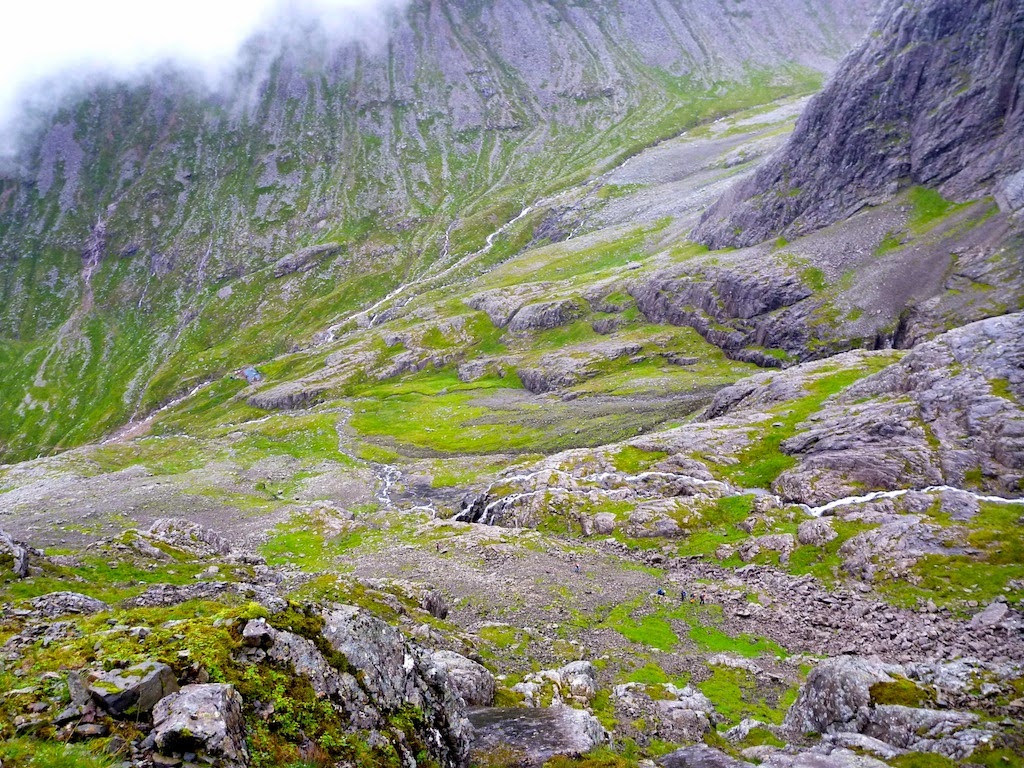 Heading for the 'Ledge Route Commute' 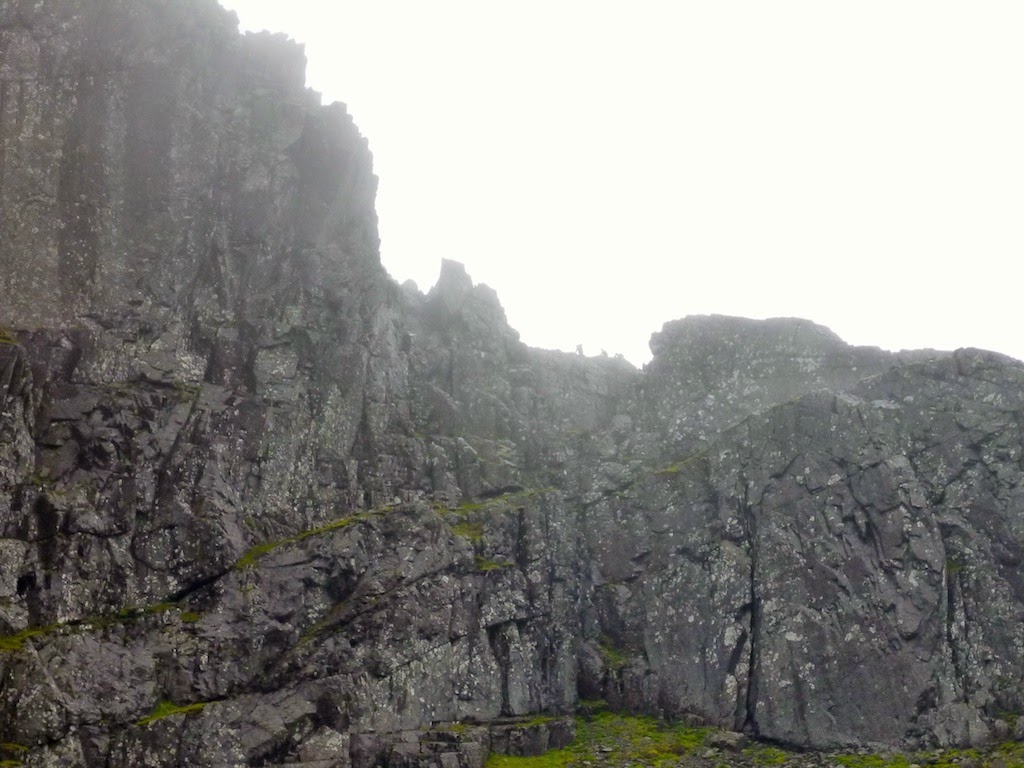 Donald's team off to work 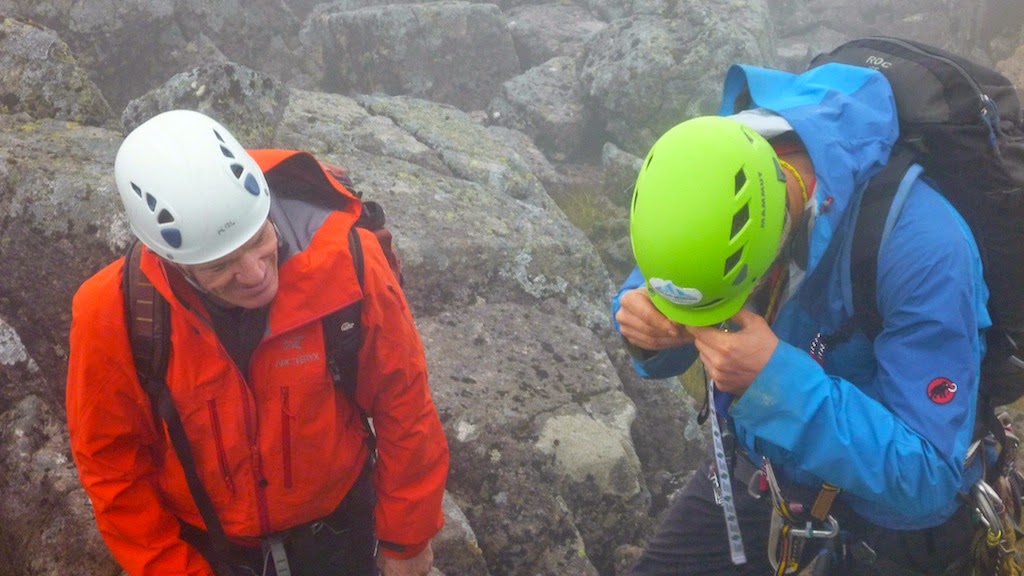 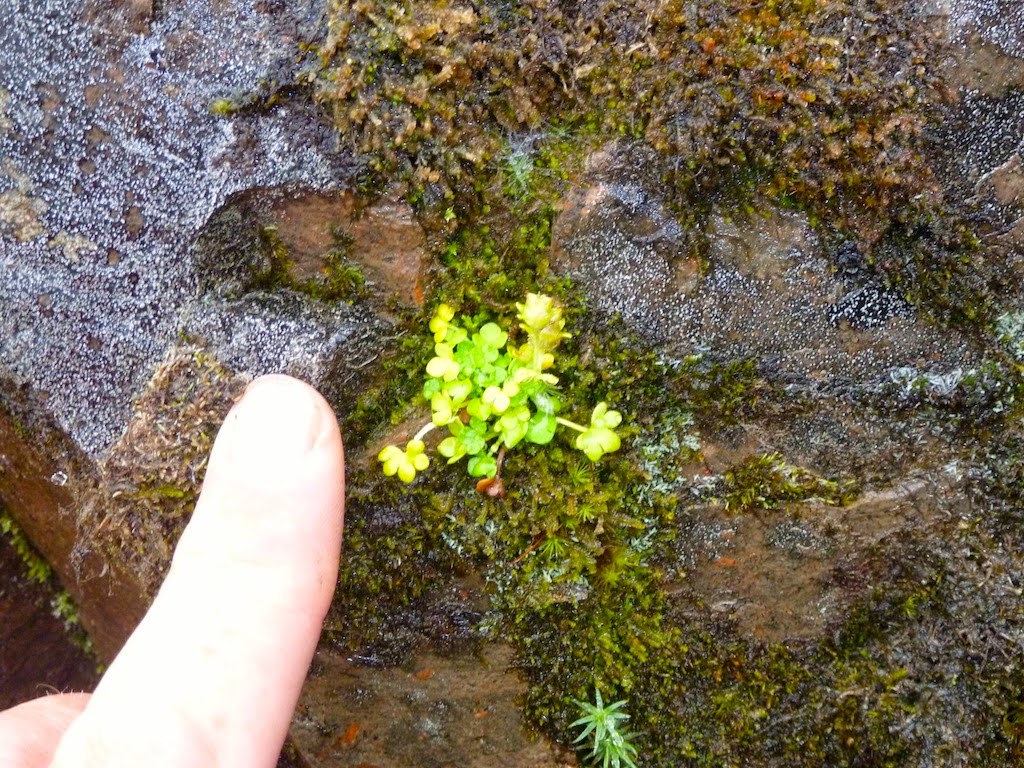 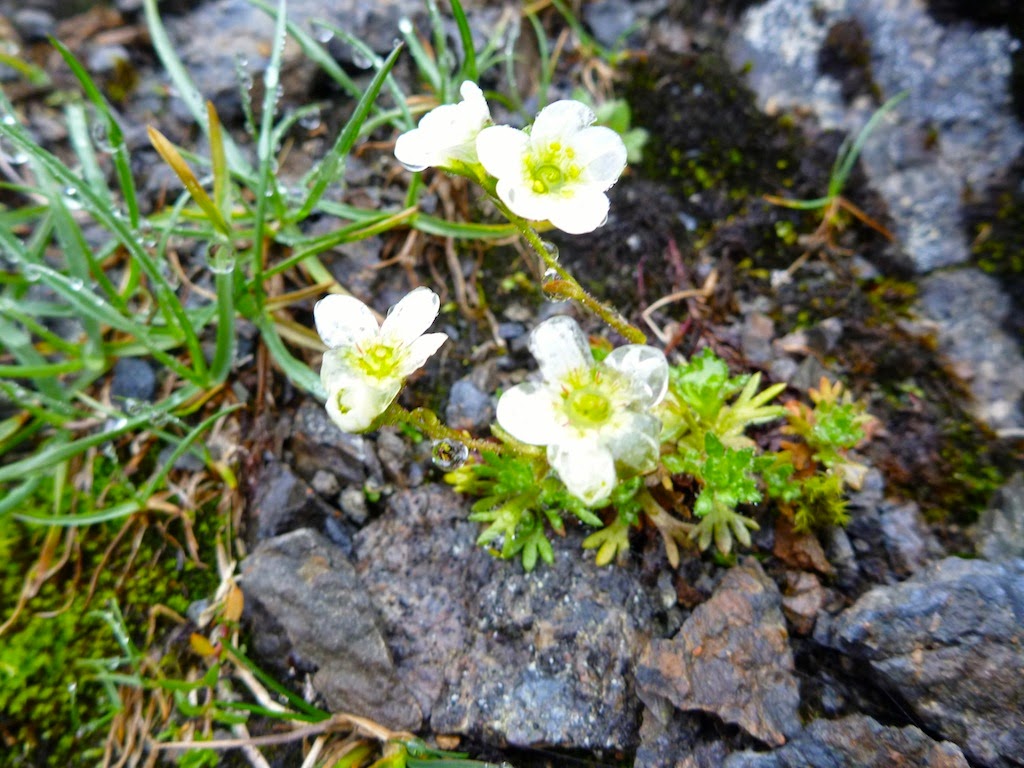 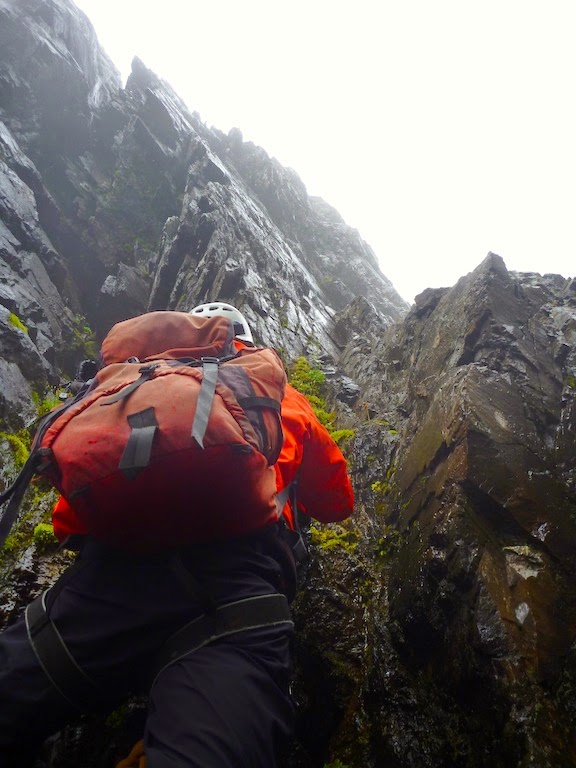 An awkward scramble to see... 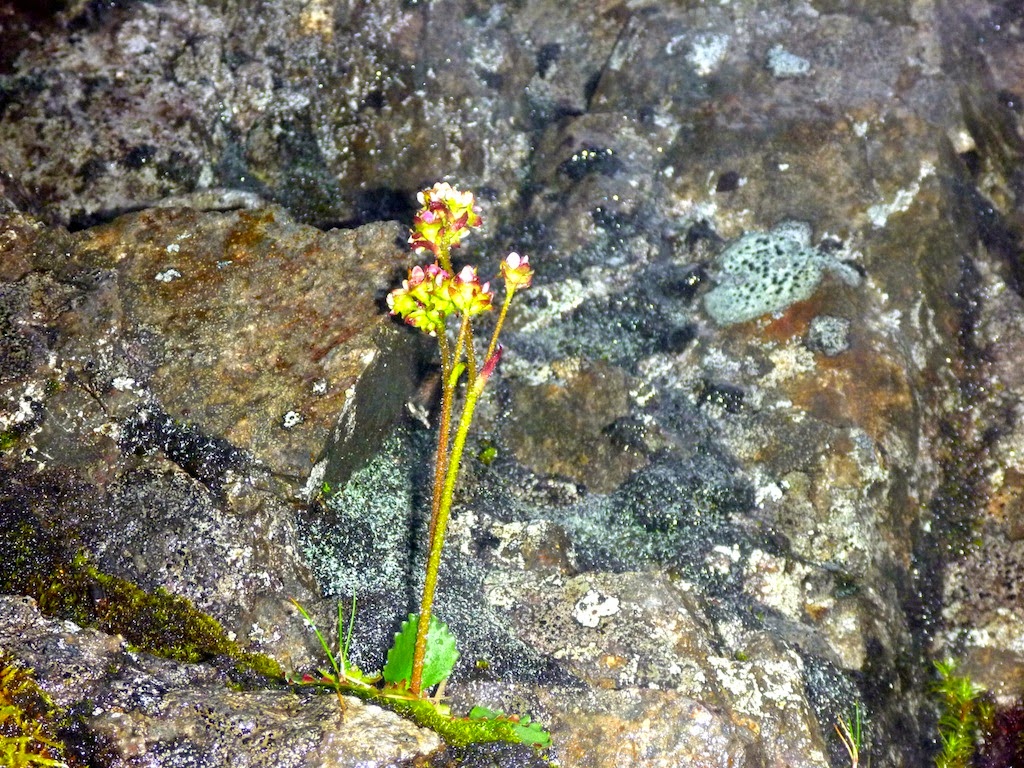 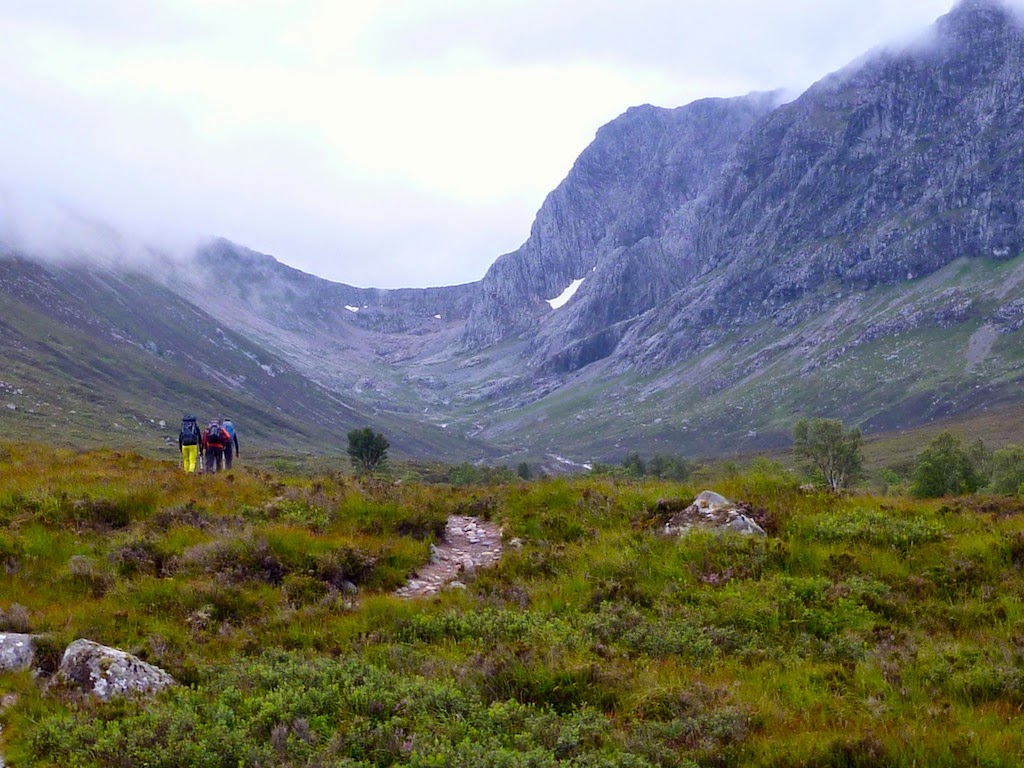 Walking in on the last day 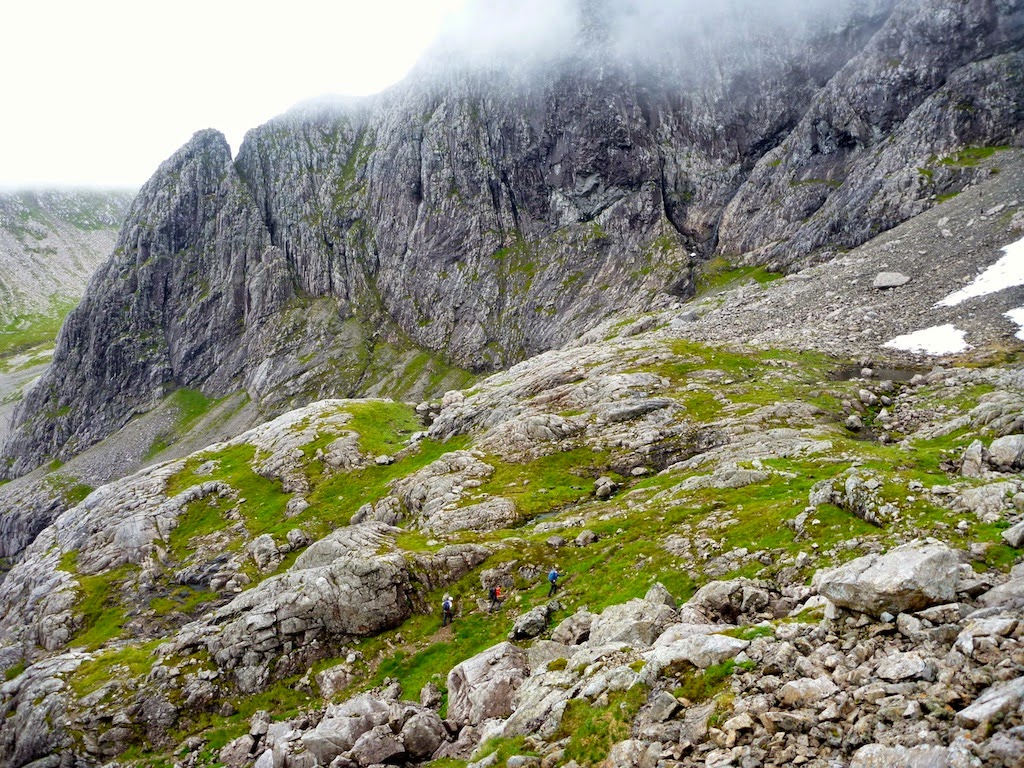 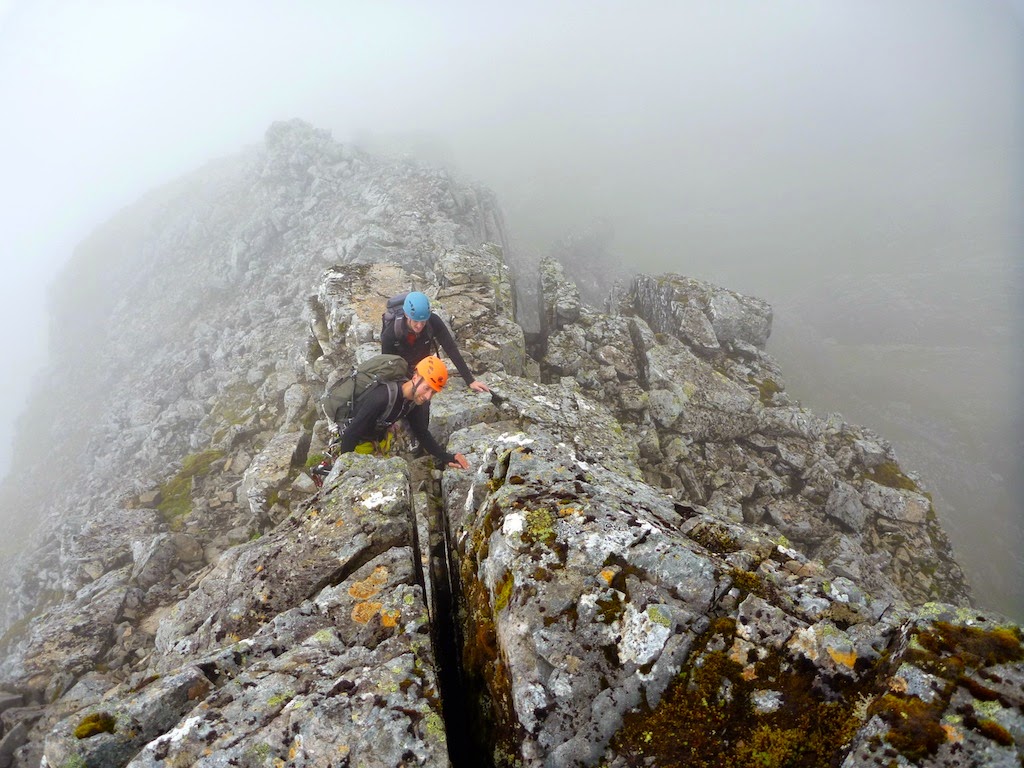 Examining the fault that the geologists fear may shear sooner rather than later! 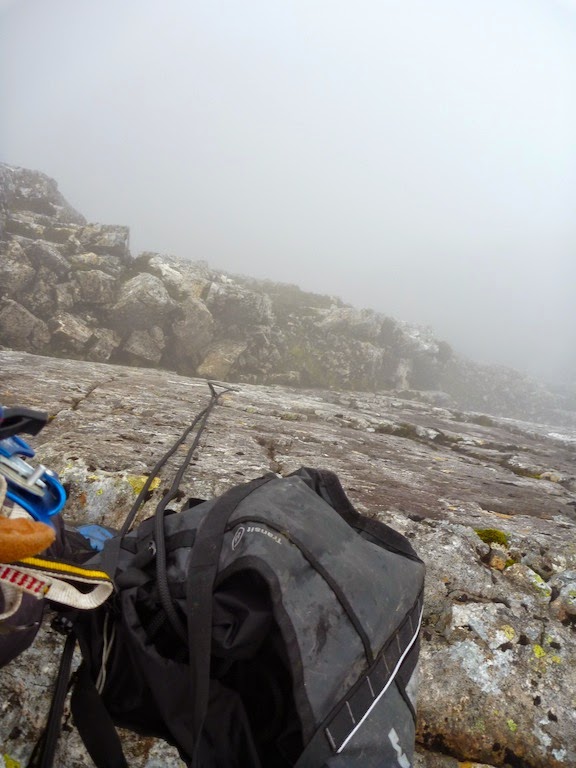 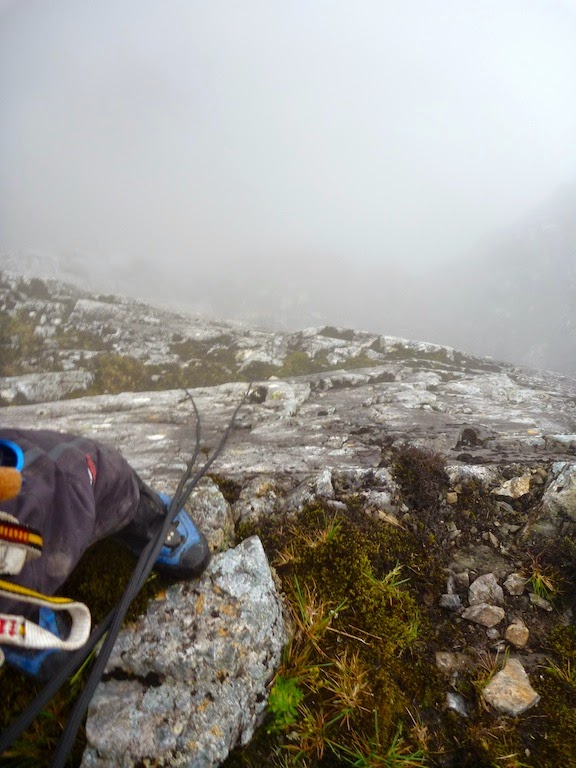 STILL not down yet! 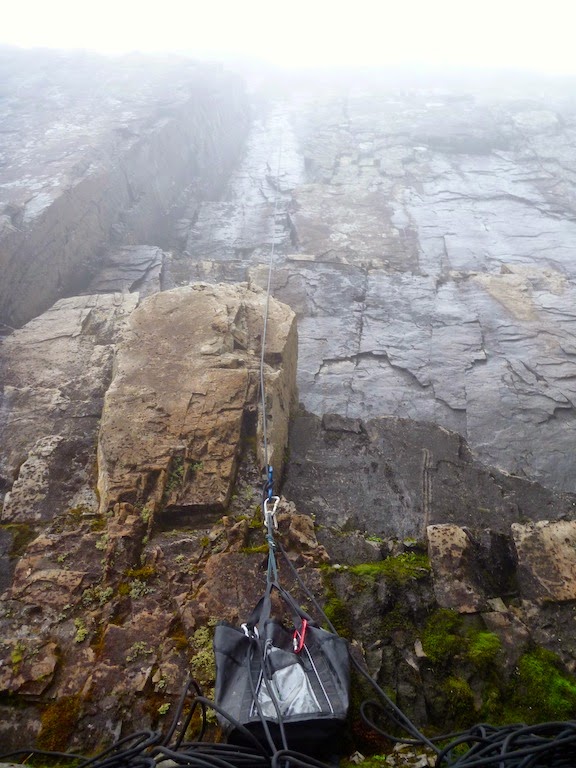 At the base of a dank and misty abseil 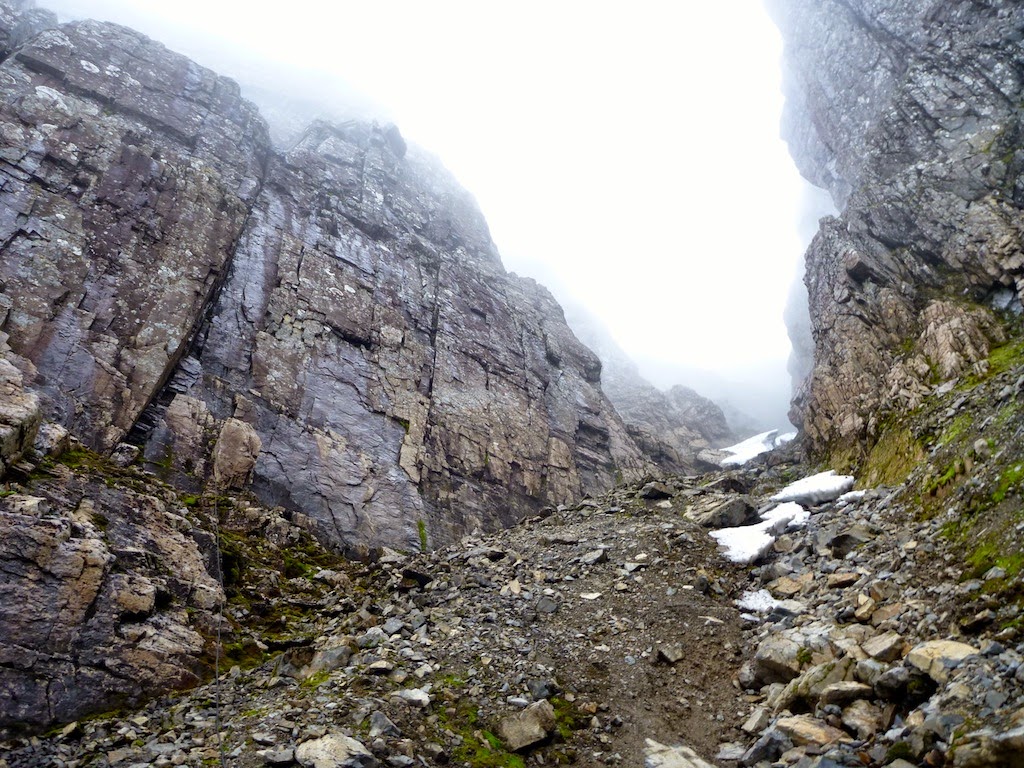 Looking up No. 3 Gully 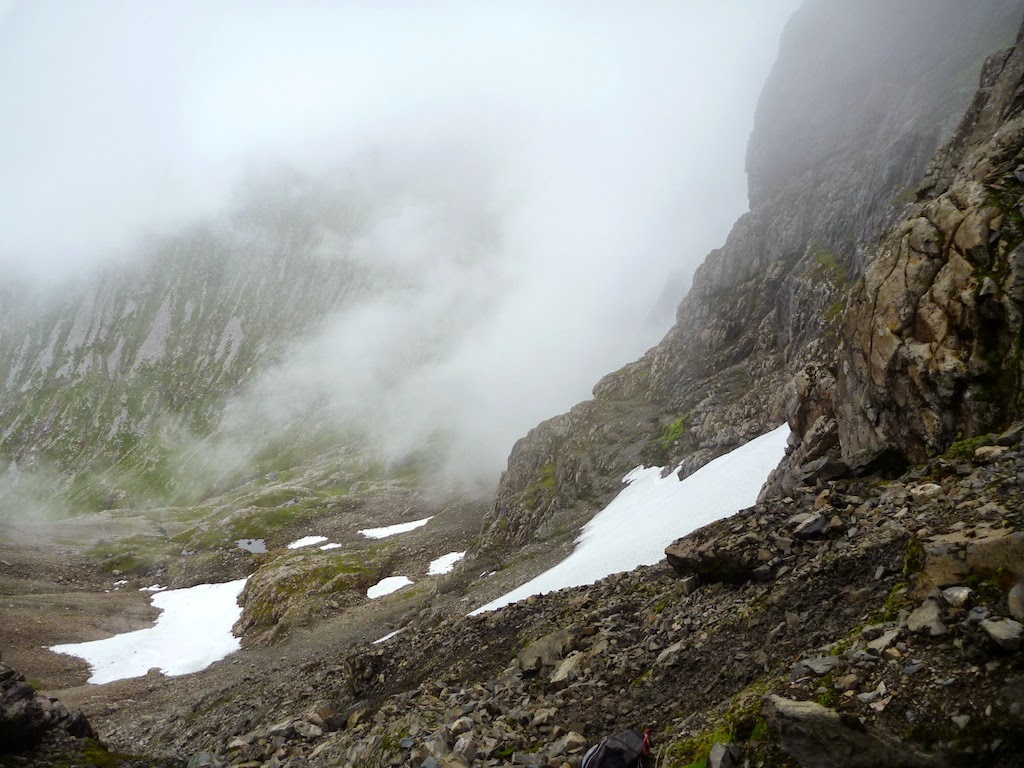 A moss patch below Green Gully worth investigating 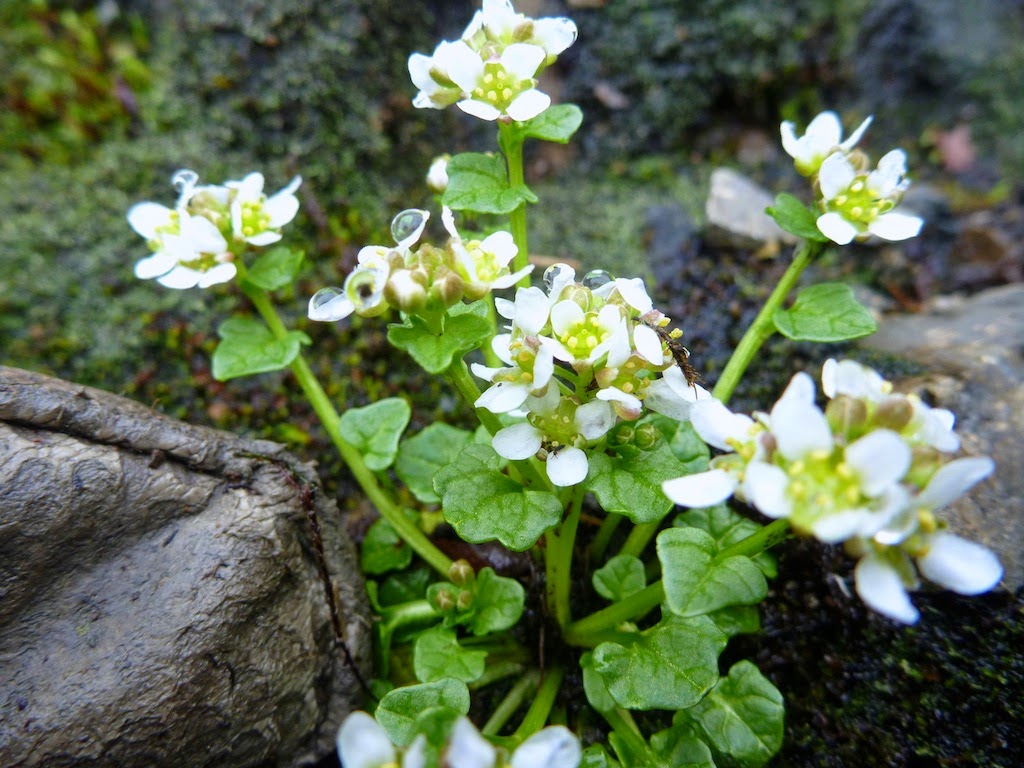 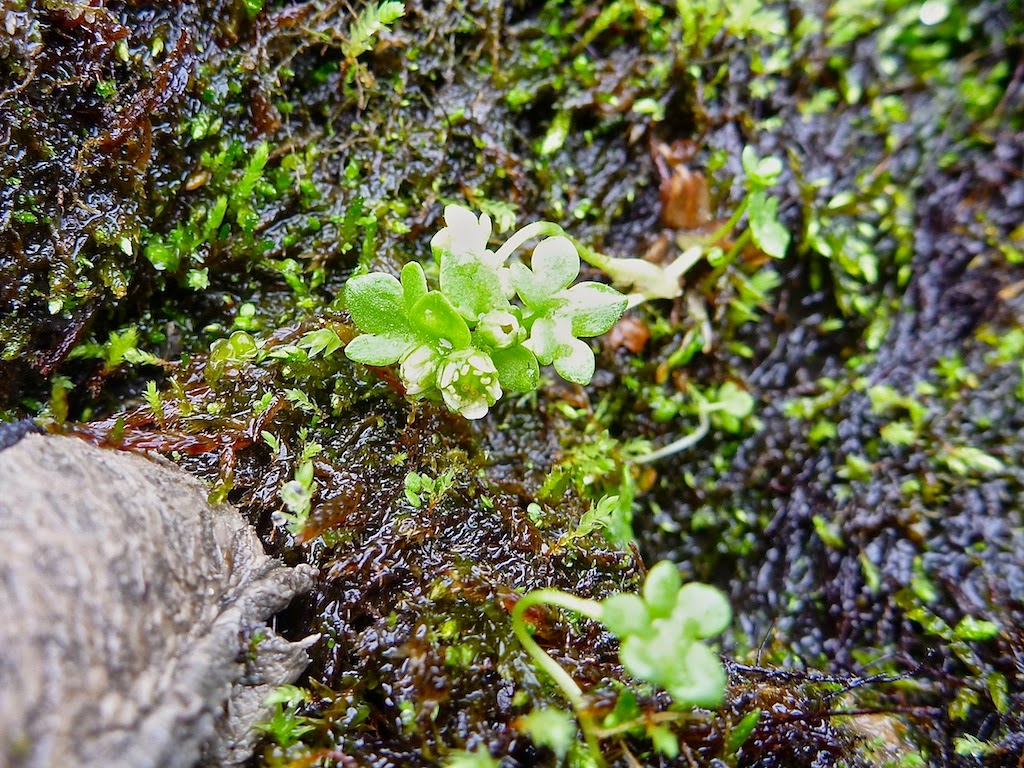 Another population of Highland Saxifrage,
easy to spot once your 'eye is in' and you know where to look 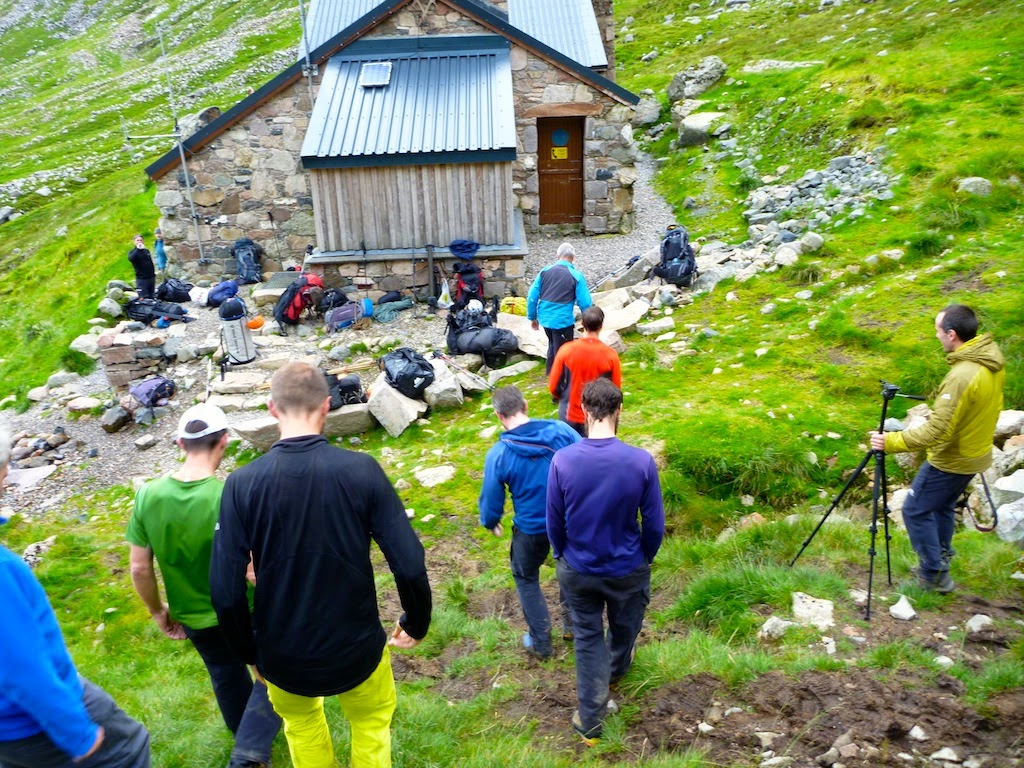 A last team photo then a huge load carry to strip the hill
Posted by Alan at 23:24