Serious fun on classic rock (and earth and vegetation)


It was the Freak's idea, Murko phoned to check I was up for it and being in need of a little adventure I said yes.
The Chasm "One of the most enjoyable gully climbs in Scotland and highly recommended. The length and modest grade should not be underestimated". Which explains why we didn't opt for an early start and I had a second breakfast of bacon roll at Murko's. 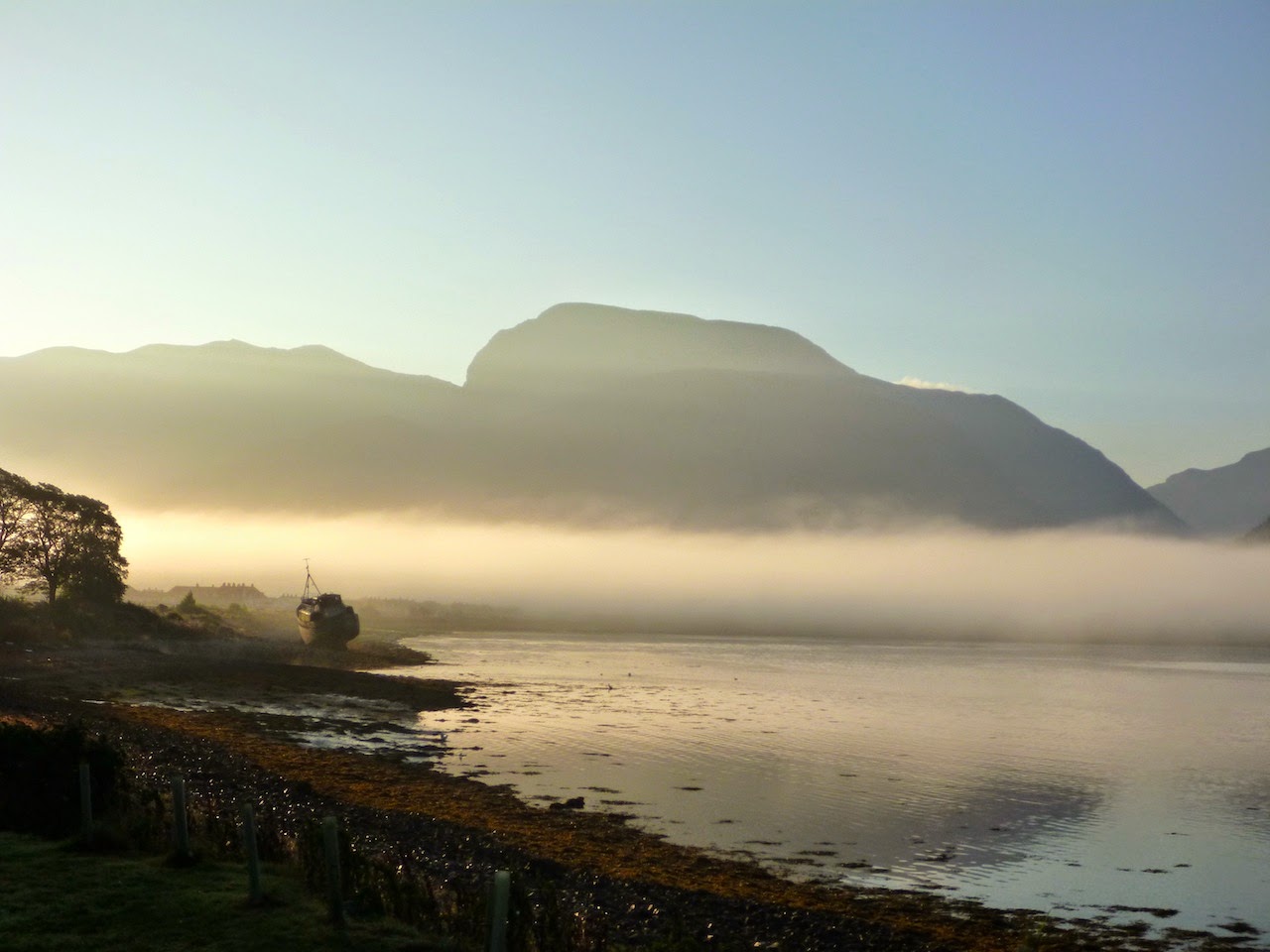 "Why are you hiding in the back of a gully in this lovely weather?" Jane's question was logical but the lure of a return to the Chasm overcame any logic. The last time I went in there I was left clinging to a couple of tufts of grass soloing low on the route as a ledge peeled off the crag and fell into the gully below :-(
The walk in is short and soon we were soloing up the first few small obstacles in the gully bed and then on the fern covered walls, rainbows formed by water splattering over chockstones. 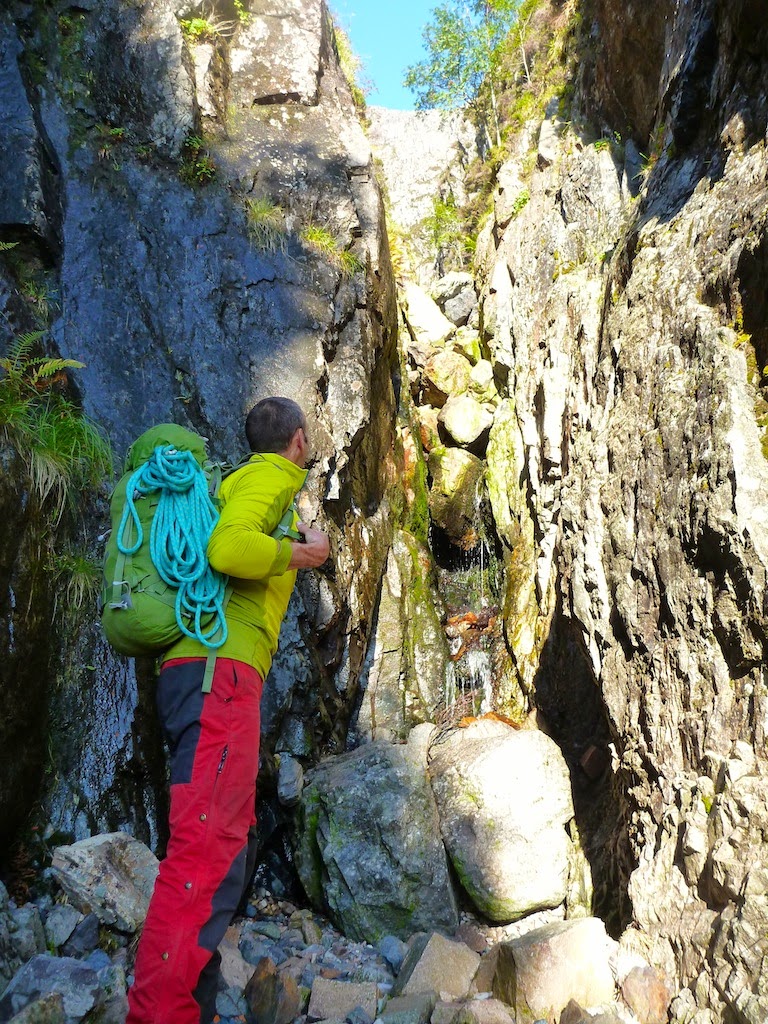 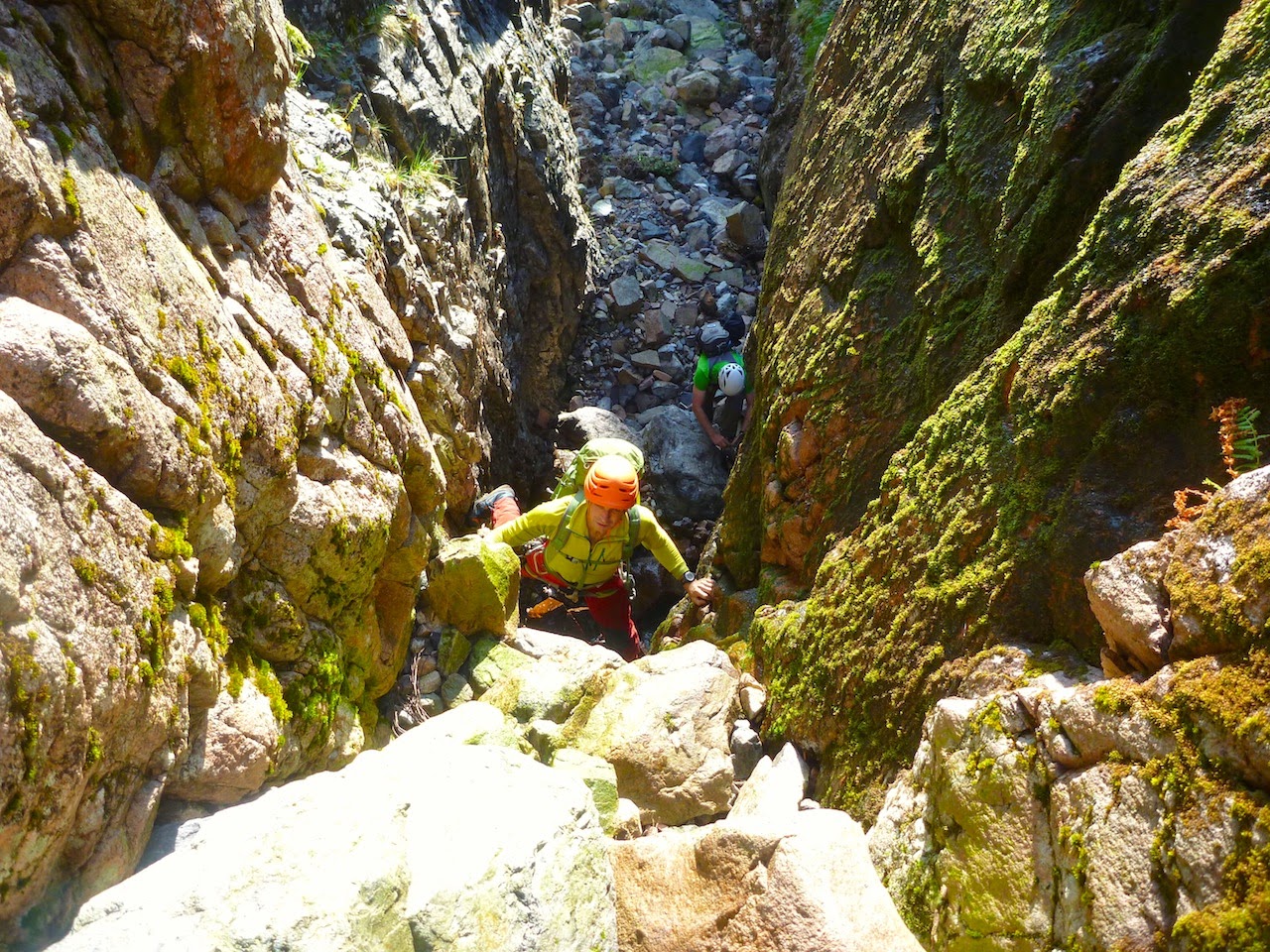 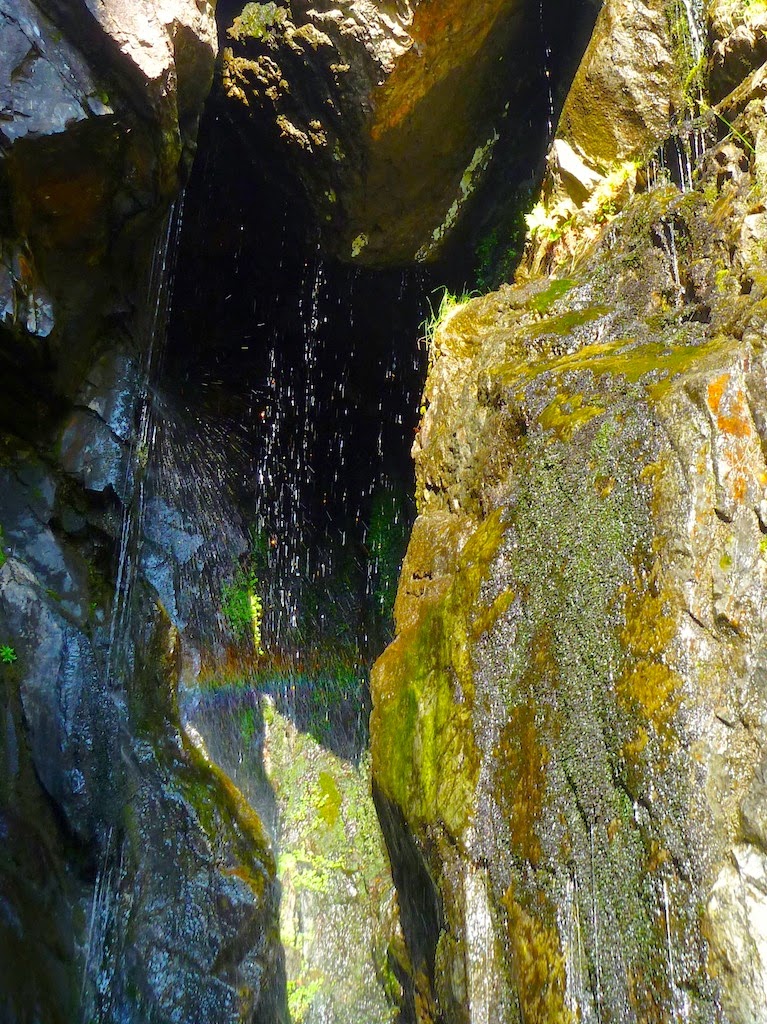 Rainbow
Then it got a little more serious, the Freak putting his money where his mouth is and leading up the first steep crack to outflank a chockstone the size of a large camper van. 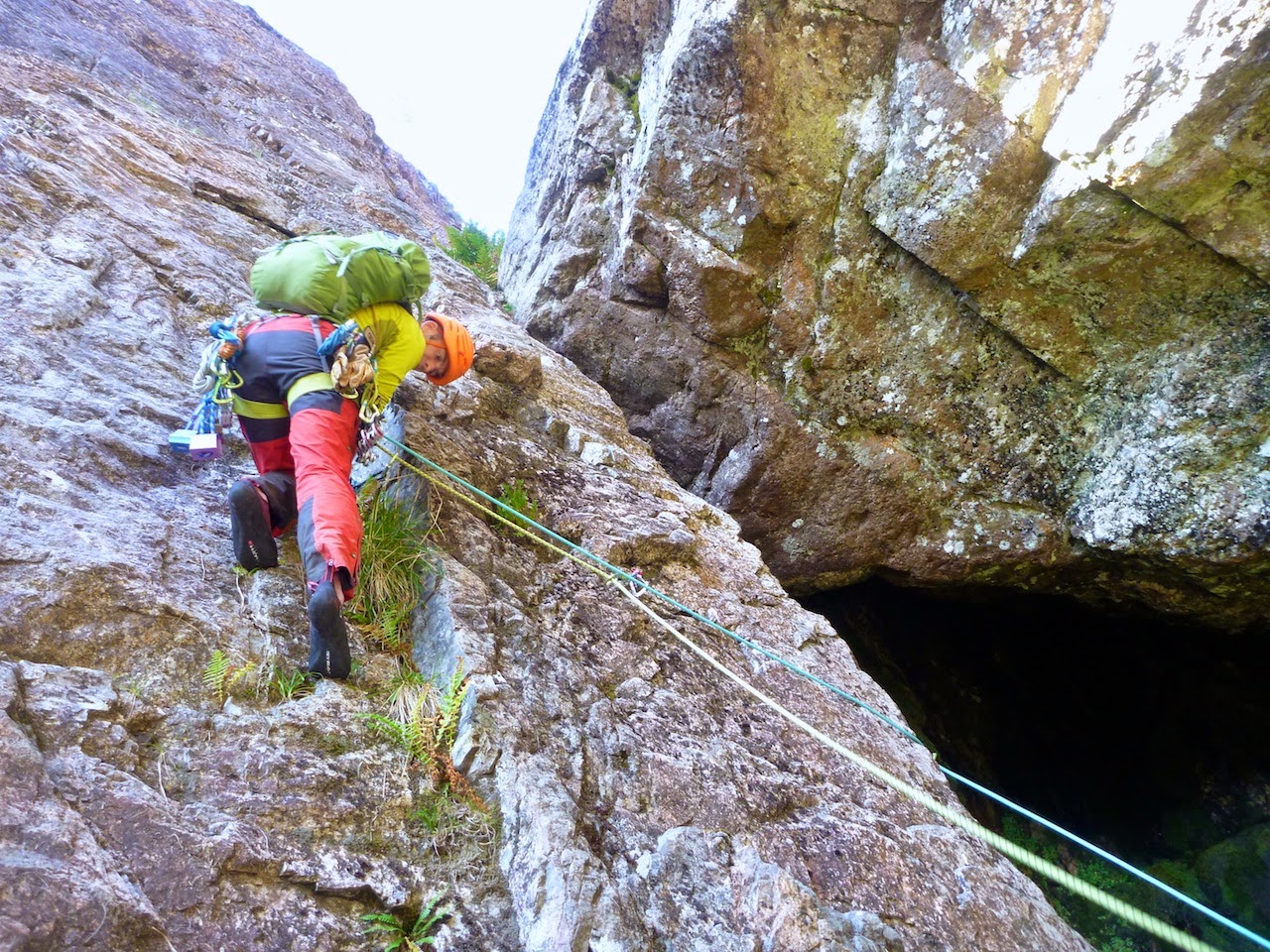 The first 'proper' pitch for us

More similar fun ensued, the Red Slab pitch a particular lowlight- wet loose and with a verdant coating of moss. Murko untied and sunbathed whilst I watched The Freak at work. 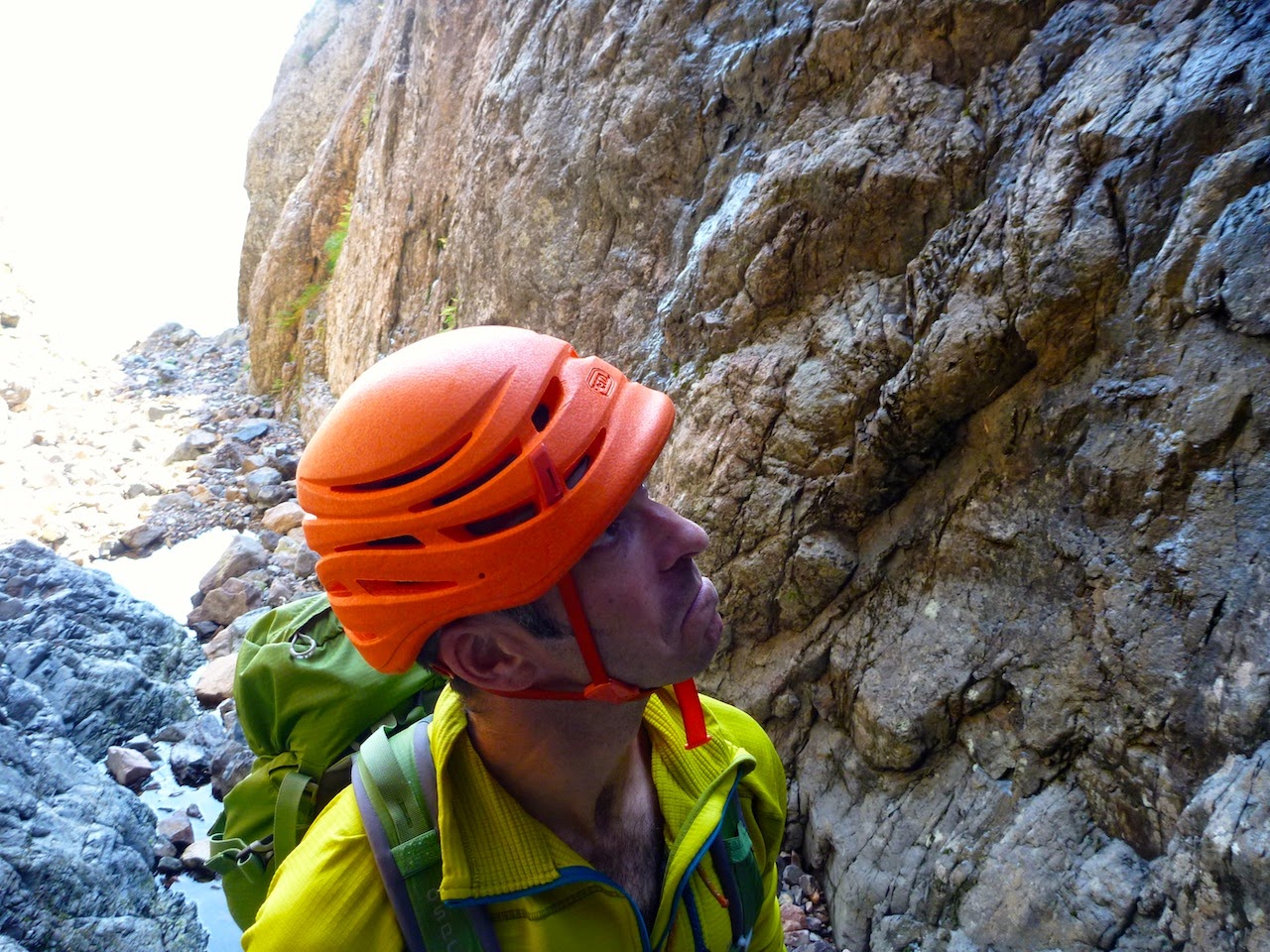 Contemplating the next pitch 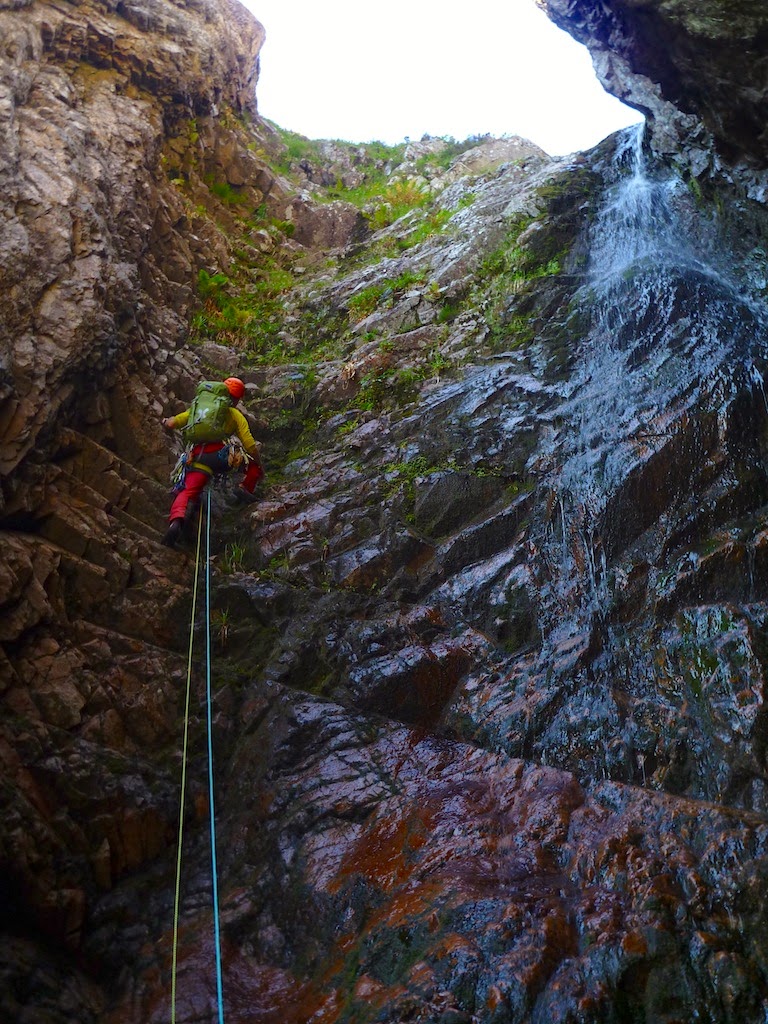 When it was my turn I unleashed my secret weapon, an old thick pair of wool socks over my shoes- old school! 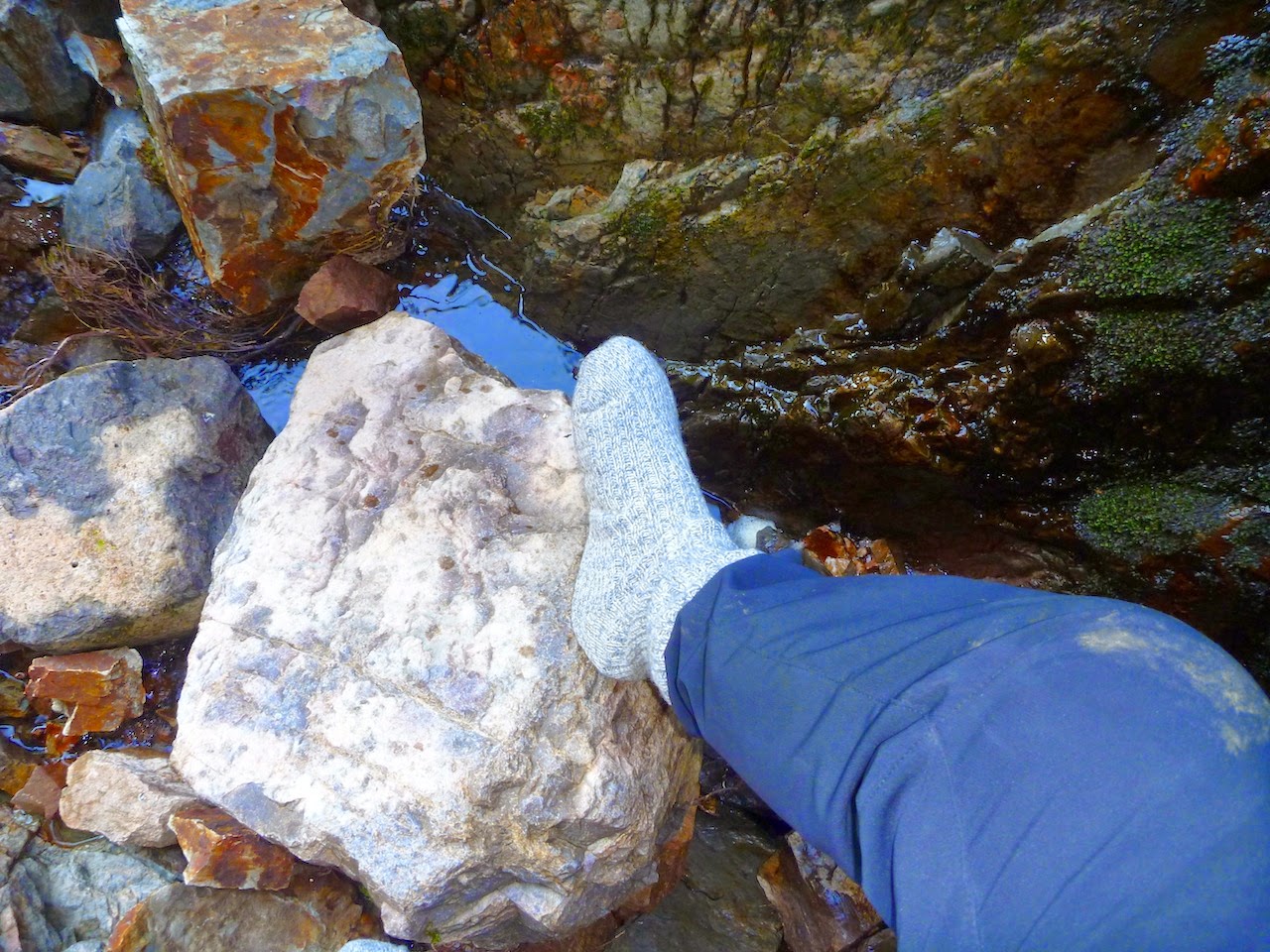 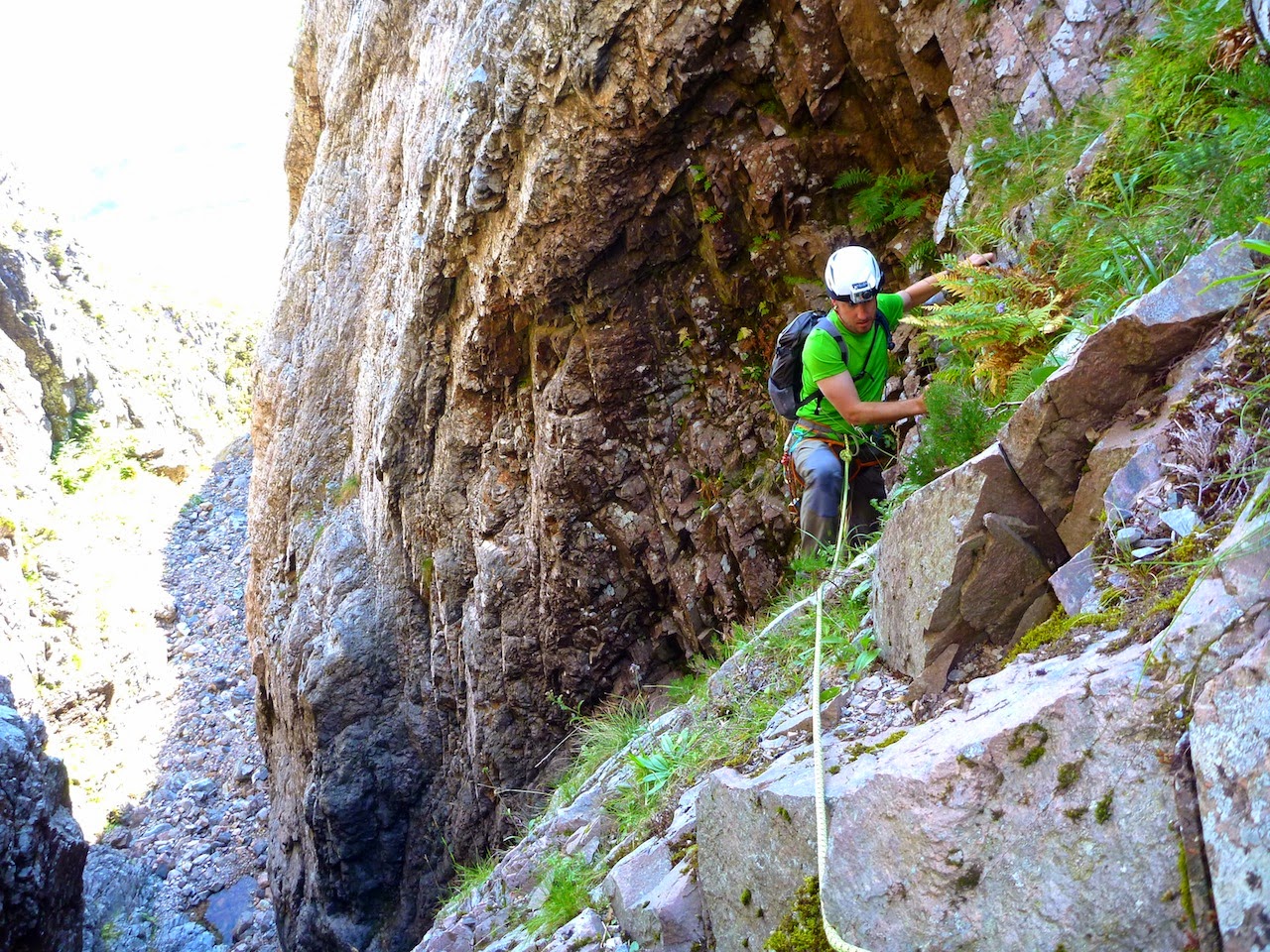 Murko traverses off of the Red Slab

At the fork we crossed a huge pile of debris swept down by the winter snows, unfortunately much of it still covered the rock (which turned out to be not much more solid). 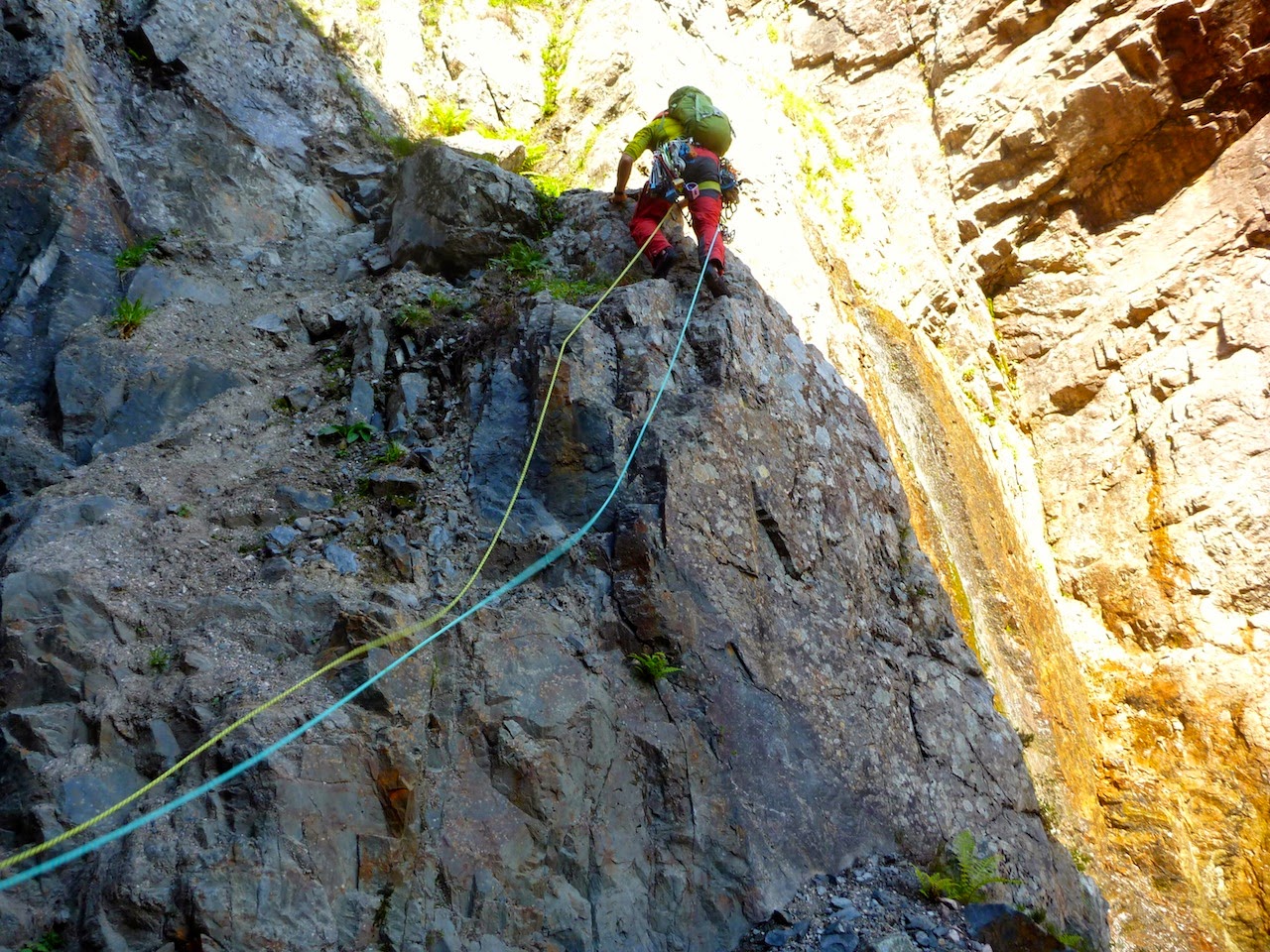 Still the Freak's block of leads and as we seconded carefully I had a moment of deja vu. Slow motion slithering as the ledge of gravelly mud I was standing on began to slither downwards. Murko behind me stepped aside as I escalatored down until looking him eye to eye. And stopped. 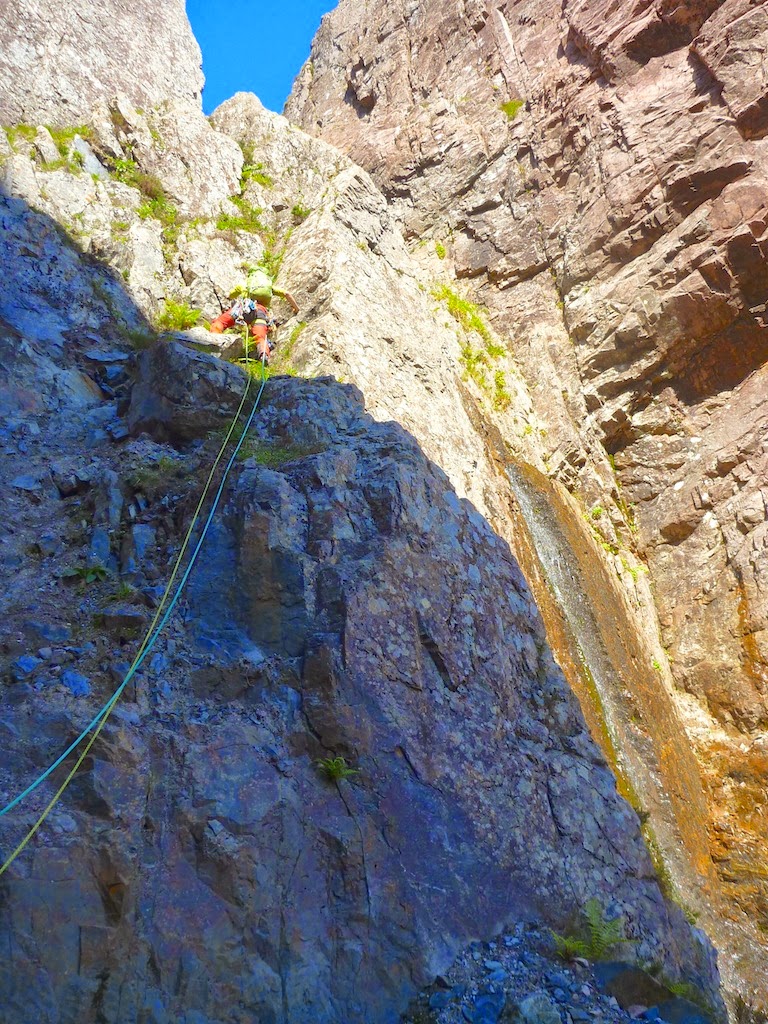 Sniggers. Lucky the big perched block above us didn't come down with me. Murko back heeled it in passing an it crashed to the bed of the Chasm scaring the Freak on belay above. 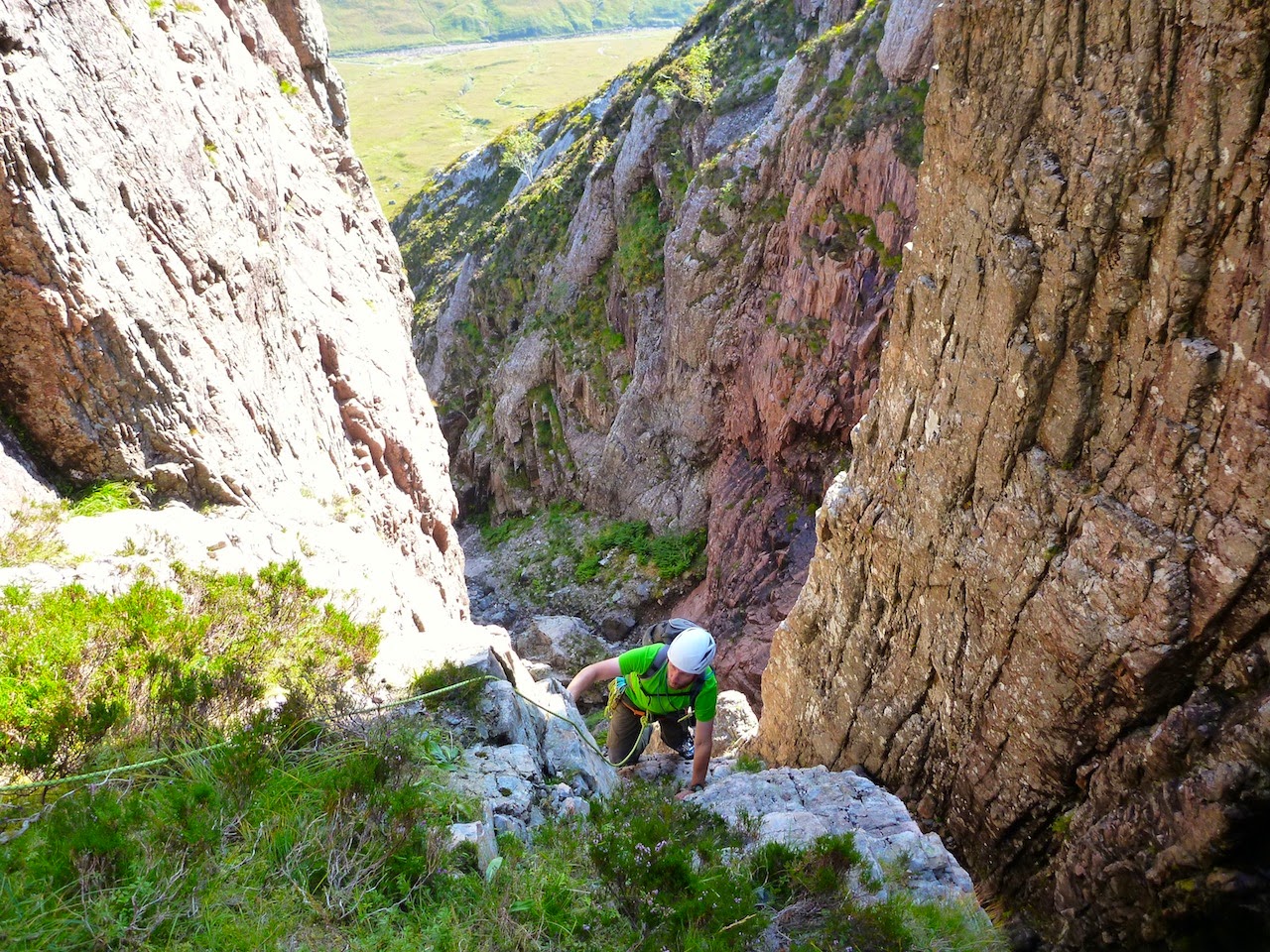 Pitch follows pitch, some steeper some not. 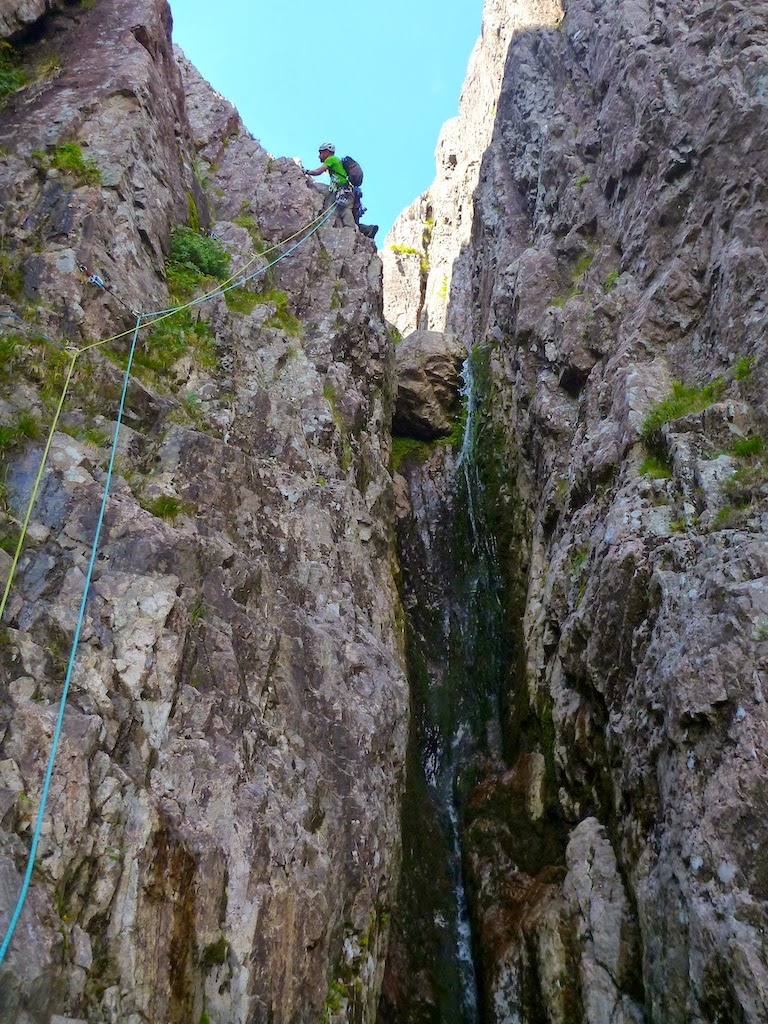 More climbing and even some solid gear 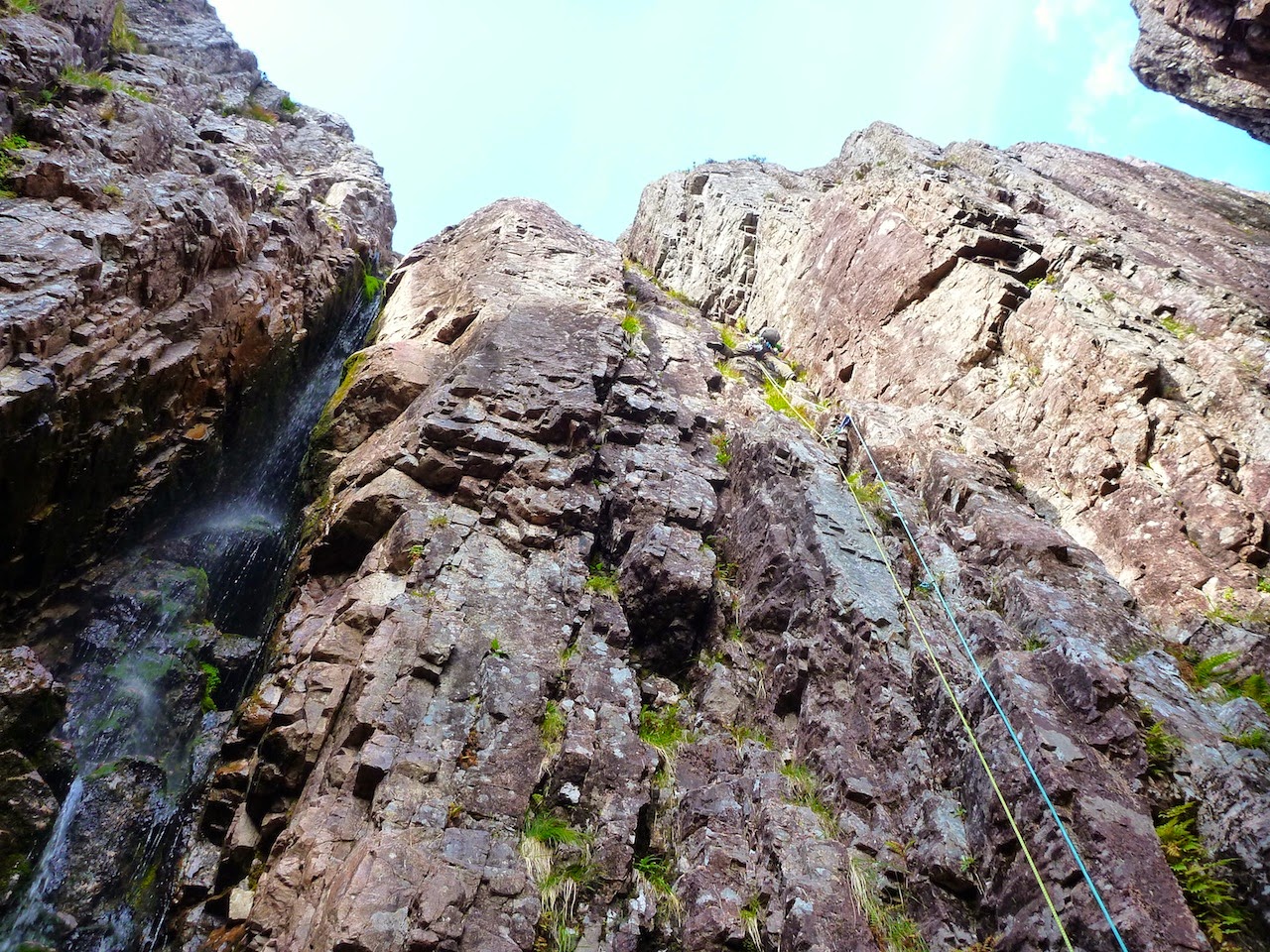 More sniggering and bantering up to the Converging Walls. I take a shower on belay in the back of the cavern refreshing in the heat of the afternoon. Murko leans across and climbs the polished holds out of the dampness and onto a small ledge. One side overhangs and both look like they have been sanded by aeons of water and debris from above. Murko is climbing well bridging at his limit. 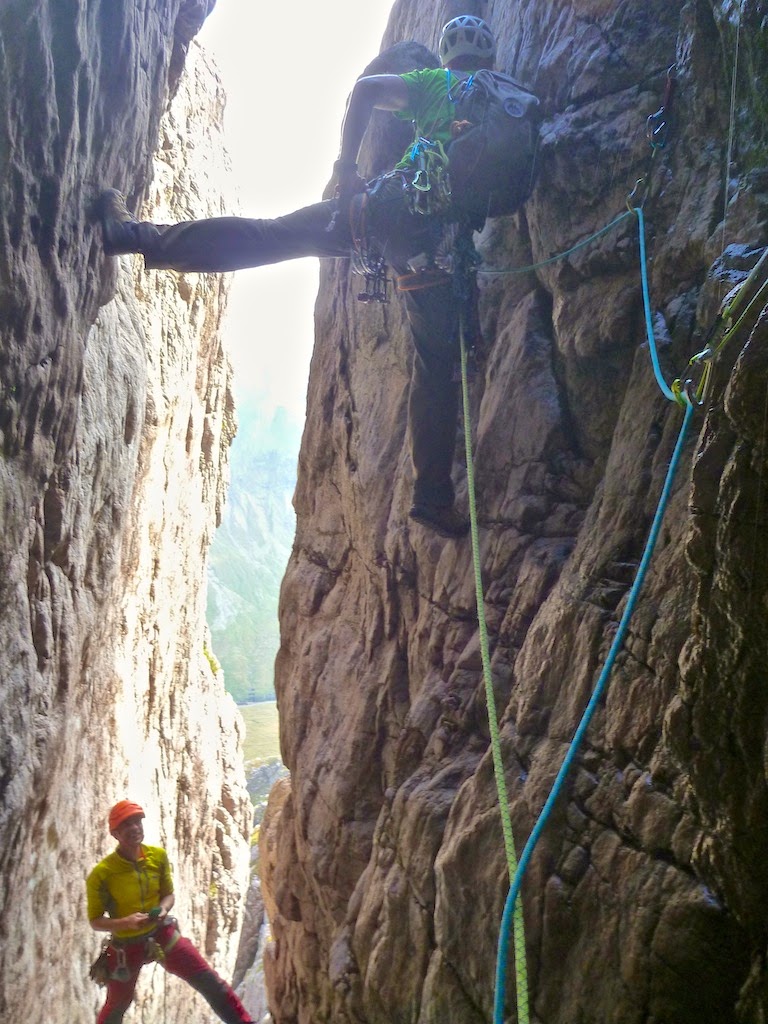 But an air weight only brass micro and much prodding with a nut key to produce a poor cam placement are followed by more impressive, grunting contortions as he seeks a way off of the ledge. 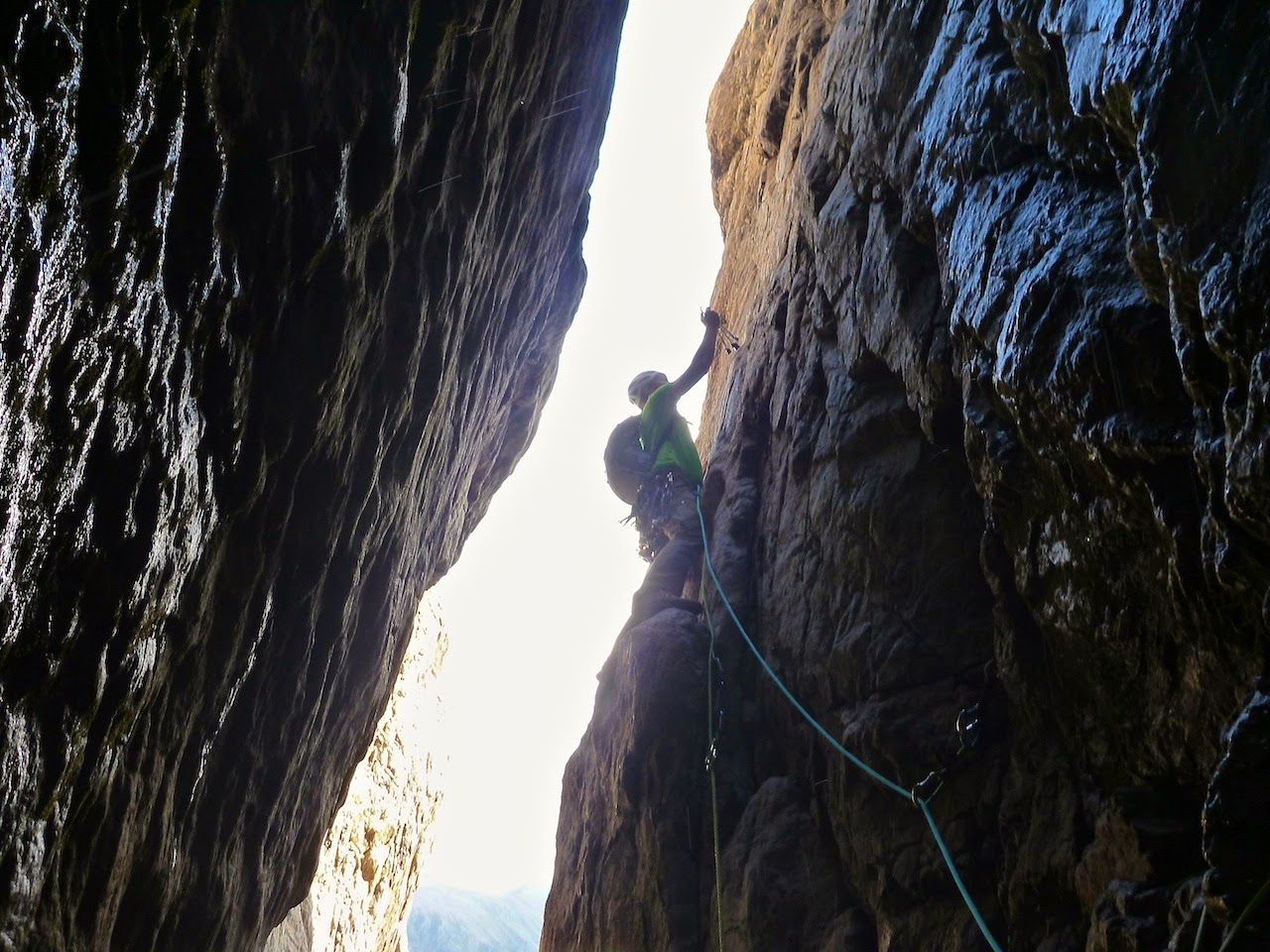 Even more impressive is his grumbling retreat bringing the gear with him (the micro fell out under his glare). The Freak has had a call from his wife ill on Skye. Its late afternoon. Peering into the rock amphitheatre  above its a long way to go. Murko has launched himself upwards in an outflanking manoeuvre and is holding on, standing on and gearing on a detached flake looking grimly determined to pretend it is solid. I glance at my watch and ask the question? Man points to be gained, work to be prepared for, last orders of coffee and cake at the cafe. A route to come back for… maybe… the rat fed starter and mains, but maybe not dessert...
In the mean time the banter, gossip, excuses and recriminations continue through the laughter and cake back to Fort William!