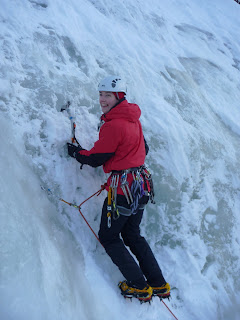 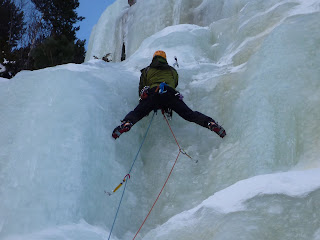 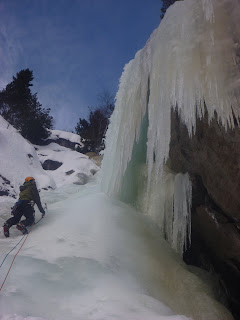 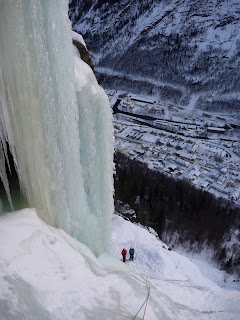 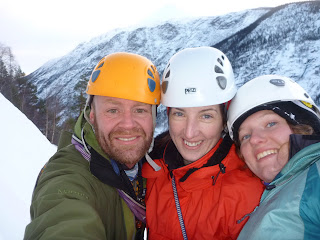 My final day with Emma and Morag and we went to the classic WI4 which is floodlit above Rjukan. Mo wanted another lead so she got the first pitch which was very brittle and awkward. After that we had 3 good pitches of ice, including a nice steep corner. The girls have bladders of steel and don't seem to need to pee... I on the other hand was bursting 10m up the third pitch and had to perform a kneeling wee on the lead with the girls politely admiring the iew in the opposite direction.
The third pitch was the crux and really pleasant and the 4th and final pitch bent up around a hanging curtain of icicles on better ice.
The first ab was from a tree, the second a hole in an ice curtain, the third an abolokov threaded with a twig and a sling to pull the cord through and the final abolokov was achieved using only the cord to thread it... yes, I forgot my threader... (naturally I found it in my pocket when I got to the bottom- don't think the girls bought my explanation that I was just creating another 'learning opportunity' :-)

Tjonnstadtbergfossen from Alan Halewood on Vimeo.

end of the week, back to Scotland tomorrow!
Posted by Alan at 17:23