Blistering on the Ben and after the thoughts after an adventure...

Well with plenty of relatives around I left the newborn Kaye in the care of Sandy and her Mum and stretched my legs on Tower Ridge today. The Torlundy car park was full but I had a late start and saw few people- maybe they were all spectating at Ten Under The Ben. In fact I was the only one on Tower Ridge.
I spotted a couple of climbers near the start of Route II/Bullroar but it was only when I zoomed in on the picture of Carn Dearg that I took that I spotted the belayer on the first pitch of Centurion, the pair on the first belay of Torro and the climber in the sun on King Kong. Lots of rock climbing classics getting attention today.
The snow that seemed it would never depart has retreated quickly from Ben Nevis and this spell of good weather looks like it will provide more good weather than the spell from April to November last year in one fell swoop!
I only touched snow passing through the cave after the Eastern Traverse today. Before this I was thoroughly revolted by the turd left in the midst of the route toilet paper and all. There has been lots (good and bad) written about 'real mountaineers' in the wake of the shenanigans on Everest but if that was the actions of a 'real mountaineer' rather than a 'Guided wannabe' it just goes to show that anyone can be an arsehole (or, indeed, not know what to do with what come out of theirs).
I was lost in a world of my own today... thoughts of fatherhood... plans for future trips (Afghanistan or Tierra Del Fuego... anyone know anyone with a yacht in Punta Arenas, my mate's business went bust). So much so that apparently I strolled straight past Dan without even acknowledging his hello- sorry Dan. 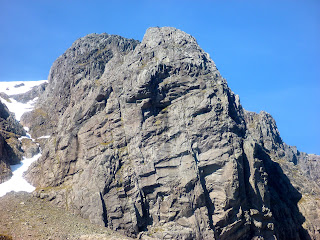 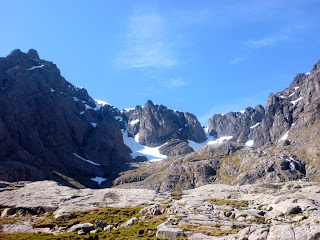 Gullys still hanging in there 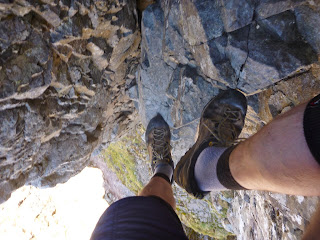 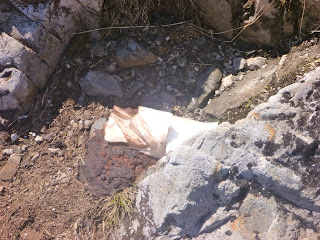 Product of an arsehole 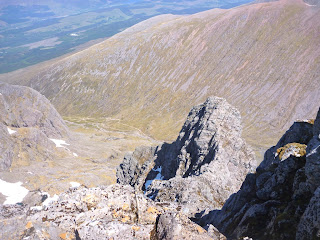 Got home and saw a great tweet by Roger Payne. He links to this piece of writing by Morgan Hite on the difficulty we feel on readjusting after an intense adventurous experience like an expedition. I'm so lucky that Jane understands that I'm a bit lost when I come home because she's been through it herself (Svalbard with BSES, Central America alone living with local villagers with no common language, Svalbard, Mongolia, South Africa and Namibia with me). A while ago academics were using the term 'post residential' syndrome. Call it what you may I think Tennyson had a good handle on it in a passage I used in several essays I wrote at University and Hite has also latched on to:

I cannot rest from travel: I will drink
Life to the lees: all times I have enjoyed
Greatly, have suffered greatly, both with those
That loved me and alone; on shore and when
Through scudding drifts the rainy Hyades
Vexed the dim sea: I am become a name;
—Tennyson, Ulysses
Posted by Alan at 21:56

We also enjoyed the ridge on Saturday, and can't have been too far behind you as we saw the guys about the same place on Centurion. We also noted the *ahem* turd. I've written a post about our day here if you are interested:

That's great news it would be a shame to be the only one enjoying the queen of routes up the Ben on a day like that. Sounds like you were making the most of the training opportunity and have a good trip to the Alps!

Hi there would you mind letting me know which hosting company
you're working with? I've loaded your blog in 3 different browsers and I must say
this blog loads a lot quicker then most. Can you recommend a good hosting
provider at a honest price? Thanks, I appreciate it!

I think that is among the such a lot vital information for
me. And i am glad studying your article. However should remark on few normal things,
The site style is great, the articles is actually great : D.

Excellent way of telling, and nice post to get facts on the topic
of my presentation focus, which i am going to convey
in academy.