MIA Problem Solving and an evening hit on Magic Crack 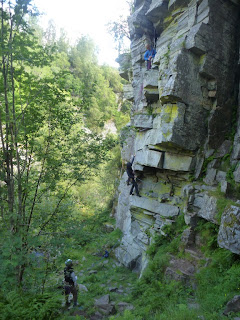 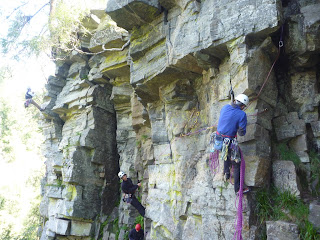 'Now get out of that' 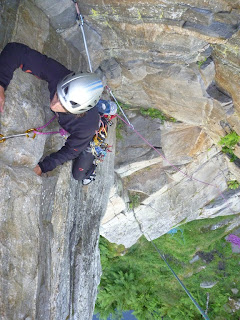 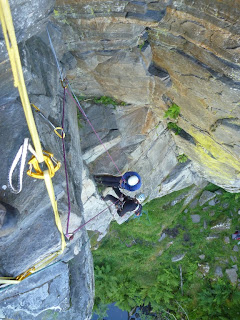 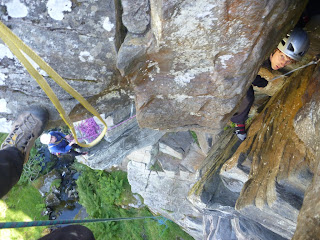 Peering out of the last pitch 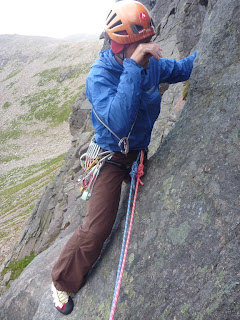 JJ with a tear in his eye for the abuse the route has taken? Or is it the midges? 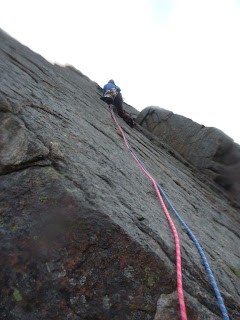 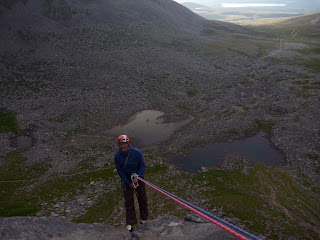 Heading down
Another busy day for the MIA Trainees. Today it was problem solving at Huntly's Cave and my pair: lowered past knots, abseiled past them too, rescued people with dislocated shoulders from traverses on sea cliffs and fainting partners high on a mountain route, restored safety to seconds who had climbed past runners and hoisted partners incapable of handling the crux of routes. The midges were out but not in the sun above the crag and Smidge rules!
With the sun still beating down JJ and I had planned a quick hit on a Sneachda Classic. A fast sweaty walk in saw us at the base of Magic Crack at 6. Jon led the first pitch and I took the second (small holds  for a move at the top but stinking gear). Jon led up the third and I'd already seen pegs galore (in all states), prussic loops, a hex, a cam, slings all adorning bits of the crag. The last pitch has some of the nicest 5a climbing I've done in the UK but heck its been trashed. I've never seen a rock route so altered by winter abuse. Every foot hold is scarred by frontpoints, every inch of the thin crack I could only fit the smallest 2 fingers of my left hand in for a couple of moves is pale from picks.
This is no rarely climbed mountain route that makes a better winter line in my humble opinion. The moves over the overlap are examples of what British mountain rock is all about. But its looking truly abused and I'm told that many of the holds are rounding off from the metal grinding on them. Rock climbers alter (damage?) routes but at a far slower pace than winter climbing will. I'd been to try it in winter once (we ended up on something else) but now I'll never go and look at this in winter. Leave it for the summer and scrape away at the corners and grooves with turf, gravel and frozen moisture.
Posted by Alan at 23:04

Hi Alan. We were just on our way out when you turned up at the crag.
Agree about the scarring. Its been two years since we last went up it and some of the holds are decidely less positive than before.

Hi Mike, I don't reckon people will stop climbing t in winter but I just had to post something. Its taking such a battering. Oh, well... lots more rock to go at.