Today Brad and I went to Ben Nevis. After yesterday's dump of snow we could see lots of sloughs and spindrift on the move as we passed below the Castle Coire and Carn Dearg despite poor visibilty and the strong wind on the walk in. So we headed for the Douglas Boulder. Mike and Abib were off to do The SW Ridge and then onto Tower Ridge and I toyed with following him up the former (knowing it would be nicely cleaned) but Brad had a hankering for snow and ice if any was to be found and there were some obvious bulges in Fawlty Towers..... Now I've done this before and when the ice is mediocre and its a great challenge at III with some steep pulls so we went for it. A few heavy sloughs of snow had us ducking and holding our breath on the first pitch which had some good snow and some rotten ice (and not a lot of gear). The second pitch was a bit more amenable giving a nice mixed challenge over a steepening with an excellent chockstone runner/hook. A third pitch taken quite direct through the rocks to the crest of Tower Ridge.
We had seen a massive caterpillar of folk heading to Ledge Route and teams bailing from somewhere left of the Comb. A party started up Vanishing and seemed to cope well with pitch 1. There is still a lot of fresh snow on the move up there and the lines in Observatory Gully all looked plastered in useless white stuff. Folk made good time on Tower Ridge despite some digging and wading to get on it. There is climbing to be had but heed the SAIS Forecast and be aware that there is unpleasant snow on a wide variety of aspects.
We carefully made our way into Observatory Gully the mouth of which was scoured and found some more ice to look at placing screws on and drilling threads. The sun was bright on the hills to the west as we walked out. 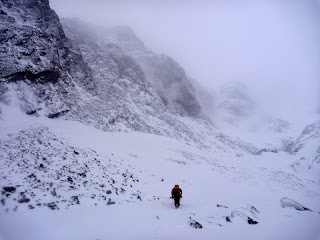 Walking in below the Douglas Boulder 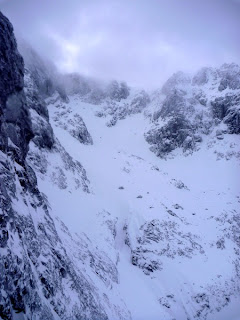 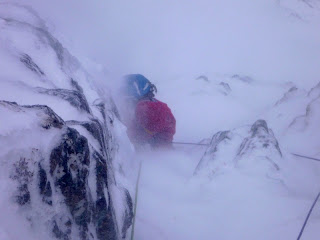 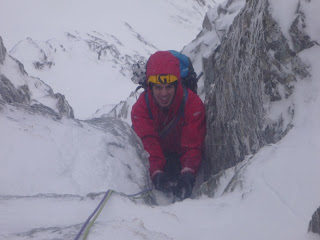 Pulling over the Chockstone 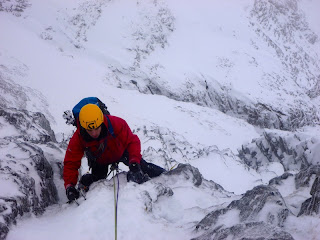 Nearing the crest of Tower Ridge 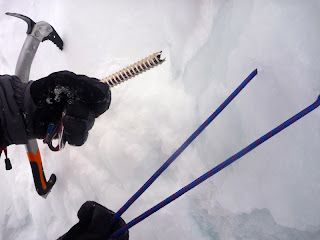 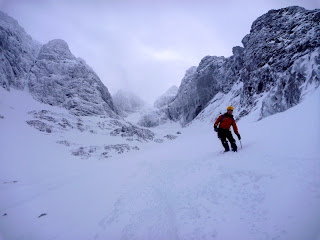 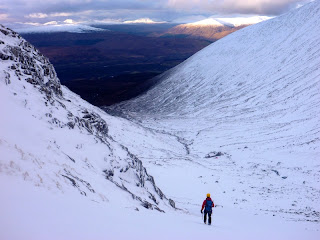 Bright hills in the west 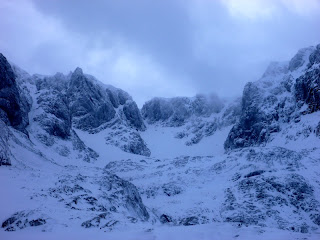 Coire na Ciste from the CIC 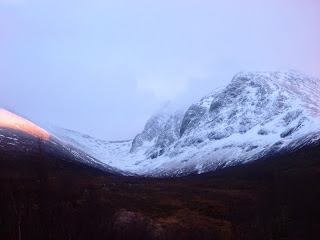