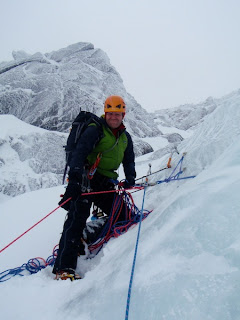 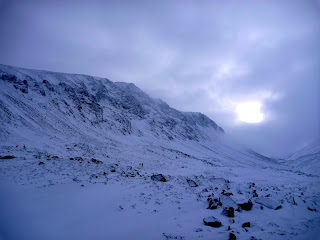 Walking in to Lurcher's Gully 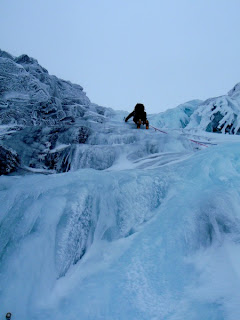 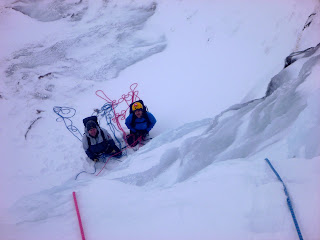 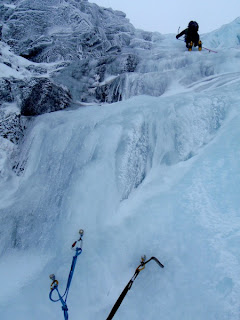 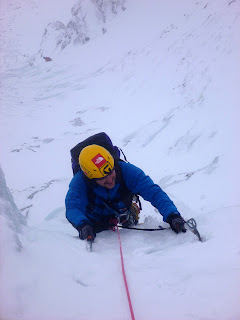 Matt hanging in there 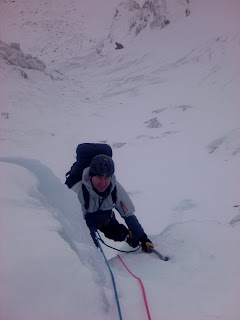 Joe happy as ever 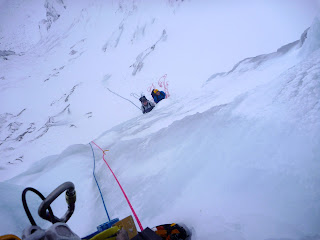 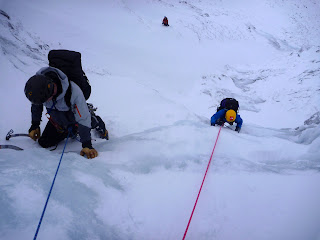 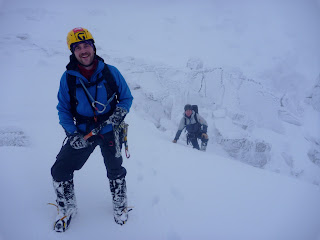 Topping out
It was a slightly earlier start today as Phil and I both wanted to take our teams to Lurchers Crag. We were able to drive part way to Rothiemurcus Lodge to take a couple of Km off of the walk in but it was still a very sweaty plouter! JC and Ferdia headed for K9, Phil and Rocio both took teams to North Gully and that left us to head further over towards Central. Another team followed us up the route but were extremely sensible in avoiding being anywhere we could bomb them (thanks guys). We had a few great, fat ice pitches (22cm screws in the belay, carrying rock gear was a waste of time) and quite a bit of soft snow plodding in between. Despite being a bit weary from yesterday Matt kept on going and Joe just kept pointing out how amazing it all was!
We topped out into poor vis. and wandered along the rim of the Lairig Ghru until we could drop down below the Chalamain Gap and back round the corner to the minibus. Well done to Joe and especially Matt for toughing it out on a long and tiring day.
Sounds icey on the west too: Gemini, Waterfall Gully, Carn Dearg Cascades, the Curtain and Vanishing getting atention.

. I'll bookmark your web site and take the feeds additionally? I am glad to find so many helpful info right here within the publish, we'd like develop
extra techniques in this regard, thank you for sharing.
. . . . .

Feel free to surf to my web site :: view more

I don't even know how I ended up here, but I thought this post was great. I don't know who you are but certainly you're going to a famous blogger if you are not already ;) Cheers!

my web site: know more about

At this time I am going to do my breakfast, once having my breakfast coming again to read other
news.

Here is my homepage ... view

I don't leave many responses, however I looked through a few comments on this page "Lurchers Crag, fat ice and big screws". I do have a few questions for you if you don't mind.
Is it just me or does it give the impression like
a few of the comments come across like they are written by brain
dead visitors? :-P And, if you are posting on other online
sites, I would like to keep up with you. Would you make a list of every one of
your social networking pages like your Facebook page, twitter
feed, or linkedin profile?

Oh my goodness! Amazing article dude! Thank you,
However I am encountering difficulties with your RSS.
I don't understand why I can't subscribe to it. Is there anyone else
having the same RSS problems? Anyone who knows the answer
can you kindly respond? Thanks!!

Your style is very unique compared to other people I've read stuff from. Thanks for posting when you've got the
opportunity, Guess I will just book mark this page.

Feel free to visit my blog post more about

That is a very good tip particularly to those fresh to the blogosphere.
Simple but very accurate information… Thanks for sharing this one.
A must read article!

My webpage: move next

Hi there, I enjoy reading through your article.
I wanted to write a little comment to support you.

Thanks in support of sharing such a pleasant opinion, piece
of writing is pleasant, thats why i have read it completely

Feel free to surf to my homepage - view more about

Fantastic goods from you, man. I've understand your stuff previous to and you are just too wonderful. I actually like what you have acquired here, certainly like what you're saying
and the way in which you say it. You make it enjoyable and you
still care for to keep it sensible. I can't wait to read much more from you. This is actually a tremendous site.

oZzy moved away a few months ago, I miss his cock, for always hungry for making
love.
FUCK MY PUSSY!

I just couldn't go away your website prior to suggesting that I extremely loved the usual information an individual provide on your visitors? Is gonna be again ceaselessly in order to check up on new posts

I do not know ωhether it's just me or if everyone else encountering problems with your site. It appears as if some of the written text in your posts are running off the screen. Can somebody else please comment and let me know if this is happening to them as well? This may be a issue with my web browser because I've had this happen before.
Kudοs

I am curіous to finԁ out what blog system уou haνe been working with?
Ӏ'm experiencing some small security problems with my latest site and I'd
like to fіnd sοmethіng more seсure.
Do уou have any sοlutiοns?

Keep up the gгeat ωorκ! You realize, many peгsons аre hunting гounԁ for this info, you could aid them greatly.