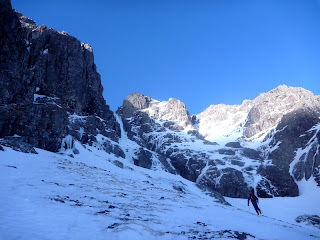 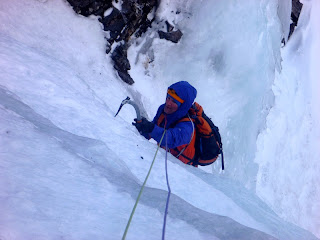 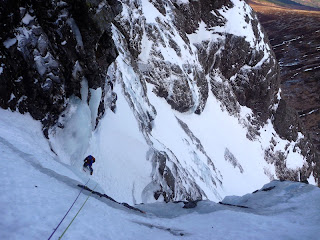 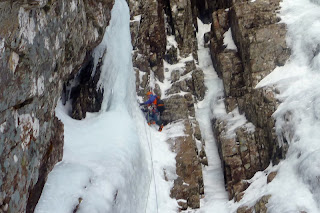 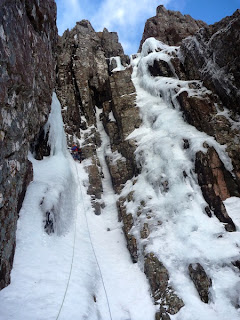 The steep bit is out of sight around the corner 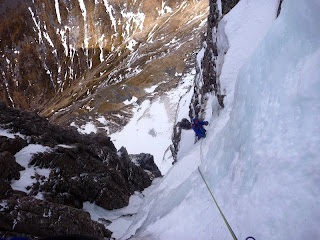 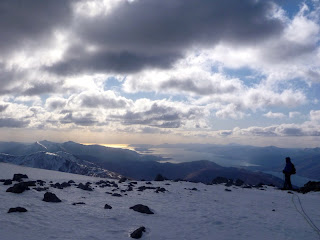 Topping out in great weather 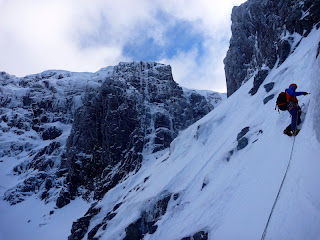 Up onto Central Right Hand 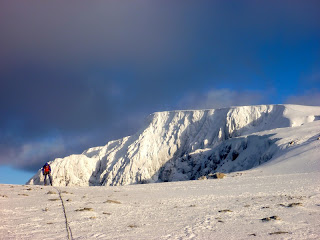 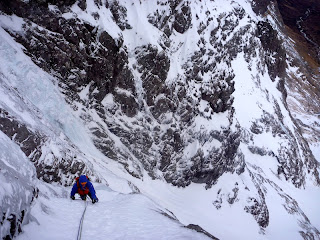 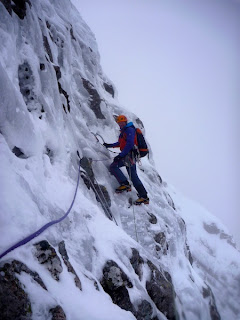 JJ looking relaxed on the crux 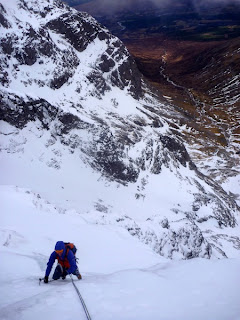 Nearly there...
I've known Jon for many years and I've worked for him and with him first at Glasgow Climbing Centre, then for his own business and now in his capacity as Head of Mountaineering at Glenmore Lodge... but we'd never actually tied onto a rope and climbed together. So earlier this year we identified a couple of days we could both take off for a bit of personal climbing time.
Yesterday we hoofed it into the CIC Hut and dropped off our kit. The usual stream of folk were heading into Observatory Gully and a pair were off to Vanishing but no-one seemed to be heading towards the Castle Coire area which meant Boomer's Requiem should be free. I knew from other blogs that it was steep and they weren't joking. After an easy intro pitch Jon led us up the crux which was indeed the steepest V I've ever been on but the rock wall to its left provided the odd bridging rest and some good rock gear. Then led a rising traversing 60m pitch which my calves were glad to see the end of. From there another 4 pitches of easier ground saw us on the plateau near the top of Carn Dearg. A stunning weather day but absolutely baltic. 3.30 was too early to go back to the hut so after dropping down No.4 Gully we popped up Central Gully Right Hand for good measure. 5 o'clock on the plateau and the light across to Tower ridge and beyond looked amazing. Once more down No.4 and back to the CIC for dinner, red wine, rehydration and a toasty night in the bunk room.
Up at 6 and out the door for 7ish and its warmer and we are the second party into Observatory Gully (someone had an early start from the car park). We were going to Sickle but I knew that Orion Direct is one of those routes that JJ had just never got round to and was at the top of his tick list. And unlike 12 days ago there was no-one in front of us. Its a great quality route and I got to lead some pitches I didn't last time. Nathan and Tom followed us to The Basin before heading up Epsilon Chimney. The team below them must have a death wish heading to the base of Orion with us climbing above them without bothering with helmets. It was a bit more like Scottish Winter today with some poor vis coming and going, some spindrift and a bit of graupel on the move.
My calves hurt... but great to have some time to climb with an old friend. And the routes are awesome.
Posted by Alan at 20:40

That third picture looks a bit like the north face of the Eiger!
Stunning conditions.

Is Julia by the way!!

That Castle Coire area is great, had a few scary moments there in the early 90's, always seemed to be a forgoten area :-)

I guessed it was you Julia... the 'other' JJ! Two top days. Now I've just got to persuade my legs to recover!
Its been an amazing spell in scotland this year. And yes Richard its the 'quiet corner' :-)