The snow level dropped whilst I was in Glasgow over the weekend and I was hoping it would stay cold long enough for me to grab my first route of the season. In the last couple of days Fingers Ridge, The Message, Hookers Corner and Savage Slit have all seen ascents. All are good choices at the moment as the turf is well insulated by snow and sopping wet. This means that usually its a time of year for mountaineering routes, the climbing wall, the grit if you live that far south or snowed up rock routes that you know you aren't going to wreck by denuding them of turf (Note there is turf on the middle pitch of the Message but that section is pretty cruisey and will be less damaged than a pitch which relies on pulling on the frozen greenery). The routes are all in the Cairngorms, classic early season venue with many routes already stripped of turf… or that never had any.
I was in a bit of a quandary. All the routes at my grade like the ones mentioned above are things I've done (Hokkers is too rich for me to start the season on- nice work Chadders) before so we took a bit of a gamble and went to Creagan Cha No. It was good to get the leg stretch to spark off the winter fitness and I was hopeful that the high base of the crag (950m) would mean it had been cold enough for rime. I was also confident that lots of snow would have dropped in there on the westerlies. The downside was that it was sunnier than expected (not often a complaint) and the sun strips this crag rapidly. We abseiled into a very full Recovery Gully and the north facing walls and chimneys were rimed, icey and snowy whilst the sour facing ones were stripped bare. We knew the turf had no chance of being frozen so led up the rocky Chimney Rib which gave a good tussle and lots of clearing and although it gets III,4 felt more like IV,5 to me today and was certainly harder than the next route we did. After another abseil we traversed in to the upper part of Anvil Gully (IV) which I knew is bridgey, rocky and not reliant on the little turf there for Jamie B to get a decent lead in. Waiting at a belay in the gully it was getting warmer and there was water moving under the snow on the rock below us which had been hit by the sun. What conditions there were were leaving fast. We topped out into a strong wind and enjoyed a sunny descent and lovely views.
If you are going to climb when conditions are like this you need to know the routes to avoid choosing something you will wreck. You also need to be prepared to ab off and leave it alone if you make the wrong decision. We gambled a bit today and lucked out but if it hadn't looked in we had a plan B of going over to the rim of Coire an t Sneachda and abseiling in to Pygmy Ridge which is another good option being very rocky and high in the Coire. Stirling Bomber and Hidden Chimney Direct were both also climbed today.
No hot aches…. not too much faff…. and the legs worked ok! 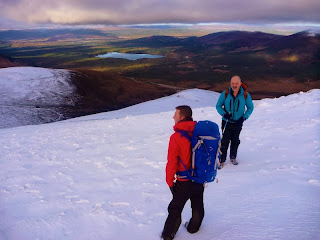 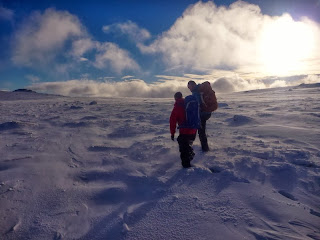 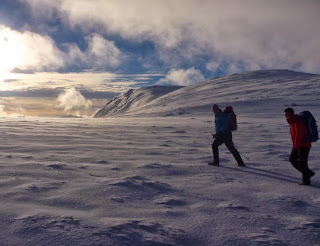 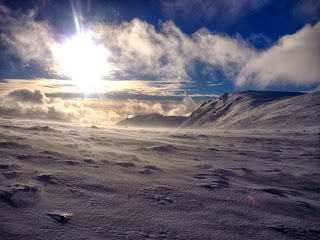 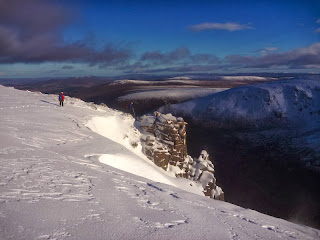 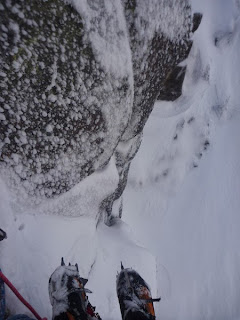 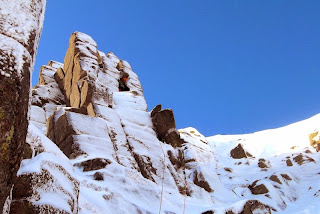 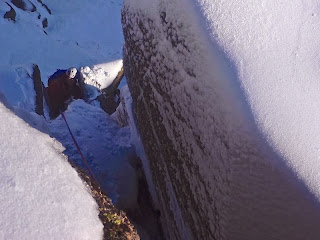 Davie pulling over the chockstone on Chimney Rib 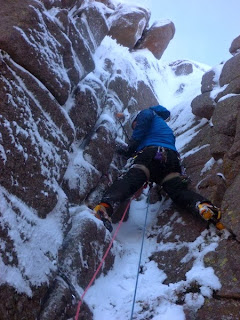