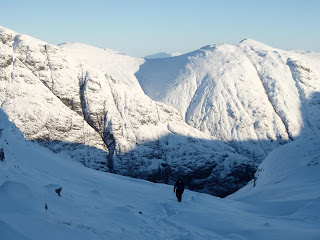 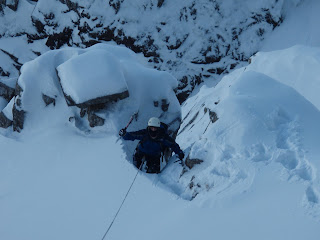 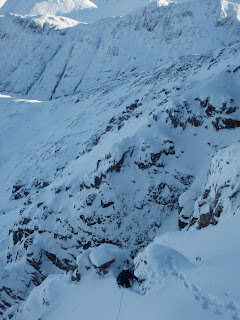 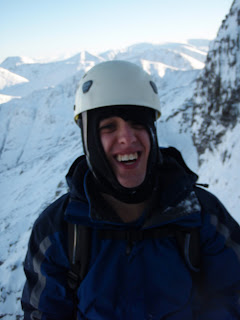 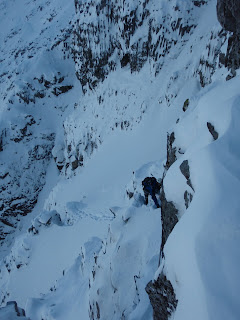 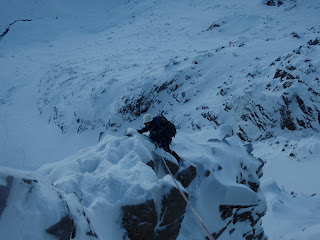 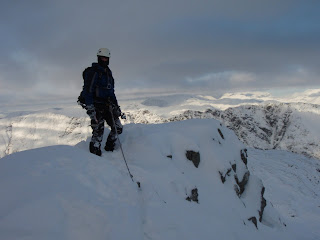 Today I took Oli out for his first day winter climbing. We went up into Stob Coire nan Lochan following a path that was covered in glassy ice on its bottom half and buried in powder over its top half. There were parties on Oringinal Route, NC Gully, Twisting Gully, Tilt (or posssibly Inclination?), Dorsal Arete was so busy people were abseiling into Broad Gully rather than wait in the queue and teams were also on both Scabbard Chimney and Spectre. The day started bright and sunny but Lochaber's coastal hills picked up a cloud cap at the end of the day.
We climbed bits of Boomerang Arete and Yankee Go Home to pick a route to ourselves at about III that didnt give us too much wading and digging and then descended via Broad Gully.
Posted by Alan at 18:48

We were up there as well today. Did Dorsal Arete, where we met the pair who'd been for a look at Original Route (which we'd also considered) and packed it in because it was such heavy going low down. Met the Scabbard Chimney pair descending, and have to say the Twisting Gully pair appeared to top out of a route we'd not really have considered 'in' in nice style. Missed most of Dorsal Arete first time by starting too high up Broad Gully, but descended to join the queues (like Sauchiehall St!) and do it all. Most of it was very easy, but the fin no pushover. The abseilers we saw were a party of four out for their first winter climb, so think they might have decided the fin was pushing it. And the Tilt/Inclination party must either still be there or have retreated, because they'd taken all day to do what looked like about a pitch and a half, and had a *long* way to go when we left!

The party on inclination topped out at 5pm, awesome route, prob only had one one long pitch to do when you left. The climbing is pretty hard

Fair enough, Sam. I know it's hard (way too hard for me ATM) so, assuming you were one of that trio, well done! :-)

Nice one Sam, that looked like hard work, especially as the snow needed a lot clearing. When I left the coire at 14.30 I was thinking you had the worst behind you but that the headtorches were going to be out. Good effort.

Just want to add that my first comment re. Inclination was intended to be lighthearted rather than critical (which I'd never presume to be where climbers and routes at that grade are concerned), and I'm sorry if it was open to misinterpretation. So let's just say we knew you were going to need the torches (have seen the second ascent chimney photo on UKC!), and it's good to hear that you finished as early as 5pm.

We were the party on Scabbard Chimney. Fabtastic route, all three hard pitchs have interest, the first 2 being awkward whilst the 3rd requires some real focus - especially given the conditions. Turf was frozen but lots of sweeping away powder snow. Final easy gully was just a hard powder swim - i've laid a good track for the next candidates!!

Looked grand Jim, well done with all the hoovering - I think it would take more than a Dyson for that lot.
Al