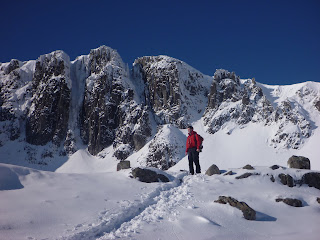 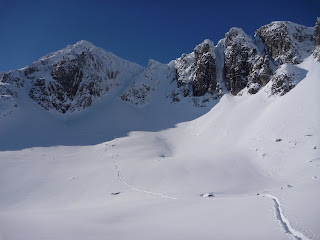 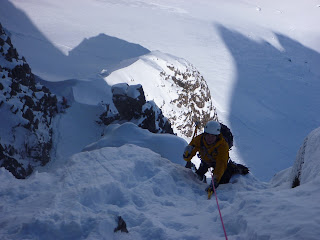 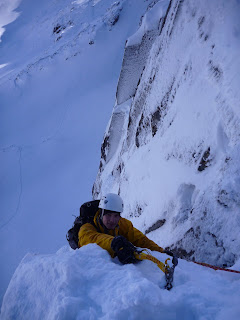 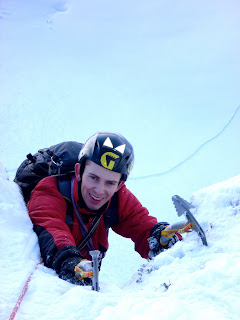 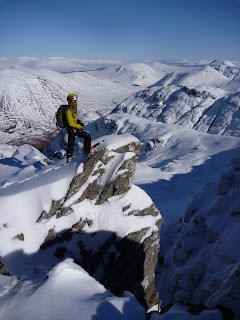 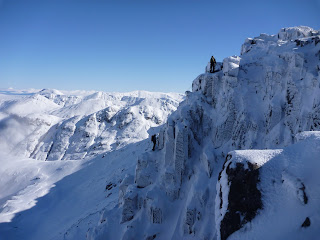 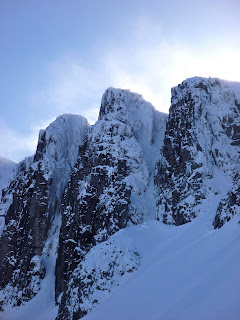 What a cracking day! Adam and Alexis were hoping to push their grade a little (one lead of a Grade IV ice route previously) today. We'd hoped to go to Ben Nevis but having seen the amount of snow yesterday and knowing that trails were pushed up into the Coire yesterday I suggested a trip to Glencoe. Their mixed experience not matching their ice I reckoned conditions were ripe for a good buttress route and after a sweaty sunny push up the trench (thanks to all those who have broken trail this week) we hit the floor of Stob Coire nan Lochan ahead of the crowds. There was a team near the foot of Scabbard Chimney/Ordinary Route (Summit Buttress) and we followed their trail until below Twisting Gully where we branched off hard right on a drifted in track. This we cleared and postholed our way along to the base of Pinnacle Buttress Grooves. A short traverse took us into the base of NC Gully which we used to get onto Raeburn's Ordinary below the chimney behind the tower. This misses out the crux pitch of the normal grade IV route but we'd done enough trailbreaking and had our eyes on the Pedestal variation higher up to give a route of IV,5. There was a good deal of loose unconsolidated snow but someone has been up the normal route recently making it slightly easier for us to follow the chimney and groove above. From here I was clearing a foot or so of fresh snow from ledges to attain a standing position on the pedestal. A short heart pounding swing left across a bottom less corner and its all over and some more digging and clearing put us back on a belay on the main route 1 pitch from the top. Alexis and Adam both enjoyed all 3 main pitches on the route- relishing the interest afforded by mixed climbing as opposed to the ice they have been more used to. We topped out into a moderate wind which was depositing snow over the lip of the crags. As we packed up Dave and a team from a Plas Y Brenin assessment arrived on the ledge behind us and he and I nipped off to the other side of NC to get some pics of his team topping out. Lower down at least 2 more teams were also on the normal route.
A bit of a wade and a slither and we were descending back to the trench- past teams on Pinnacle Buttress Grooves and North Face (the Grade III line just right of Crest Route- I shudder at this route as the only time i've tried it my partner struggled to find any rock that actually seemed attached to the mountain- looked good today though).
The sun was stripping anything to the left, the shade preserving anything to the right of a wall/buttress. Stunning day.

I can't help but believe that the market for products with photos imprinted on them, now made accessible by the Internet, represents a truly enormous opportunity. It seems like the internet today is almost entirely full of nothing but funny pictures and videos that people use to pass their days. So, to overcome this situation and to remain in a positive mood laughter therapy is the best solution which can be done by various ways by watching funny movies, by downlaoding some funny pictures or by doing chit chatting of funny text with your dear freinds.

Vanity Fair is stylish and well written, and they push the envelope in celebrity reporting, giving readers
if not a balanced representation, then at least an interesting angle to a well known personality.

It’s interesting how stars get annoyed when the paparazzi takes pictures of them.
instantly and cannot wait for magazines then celebritynewsapp is
the best available source which keeps on updating instantly.

I must thank you for the efforts you have put in penning this blog.
I'm hoping to view the same high-grade blog posts from you later on as well. In truth, your creative writing abilities has encouraged me to get my very own site now ;)