Winter back for a few days on Ben Nevis

Today the snowline was back on the down side of its repeated yo-yo cycle of this winter. Gill and Rich and I decided on a pre Christmas leg stretch and not feeling like we wanted anything to strenuous we only took a set of nuts 3 extenders and a 35m rope.
We bumped into Mike and a team of keen Trainees heading for Tower Ridge, Louisa has had a rough week of work but was out with a final day were her 3 clients in Coire na Ciste and then on Ledge Route. We saw a team digging in the soft ice at the base of No.3 Gully Buttress and a pair did Comb Gully.
We'd been hoping that if the snow fall had been light we could wander up a gully but the walk in weather soon disabused us of this notion. We ploughed on (literally, the little polystyrene like balls of graupel were deep and sitting in several distinct layers as we headed in) and I suggested we go to the top of the Garadh and look at Broad Gully which I soloed years ago but which looked to be white.
This turned out to work just fine with some old snow taking us up soloing past the first pitch. We used the rope for the wee step but once we joined subsidiary Tower Ridge we followed the easy ramp line down to the basin above Italian Climb (less graupel more slabby snow here) before putting in a short pitch onto the crest of Tower Ridge at the base of the Little Tower (just as Mike and team were heading up).
From here we descended Tower Ridge and dropped into Observatory Gully (team Abacus looked to have traversed into the Gully above Tower Scoop? and were also coming down).
Lots of snow being blown around today and a wee thaw is due overnight before more fresh snow on a wind again tomorrow.
Take care where you wander folks, snow conditions are getting a little more complex and there were definitely spots I didn't want to go today. As ever start with the SAIS and the Be Avalanche Aware process.
More pics on: https://www.facebook.com/climbwhenyoureready.mountaineering/media_set?set=a.997429490300168.1073741987.100000993792059&type=3&uploaded=19 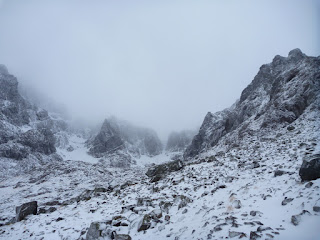 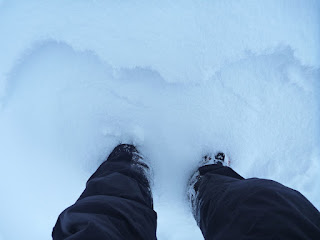 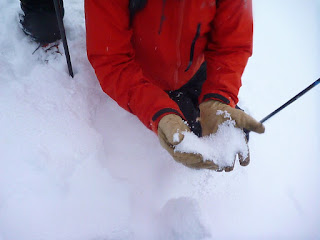 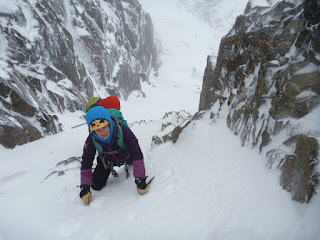 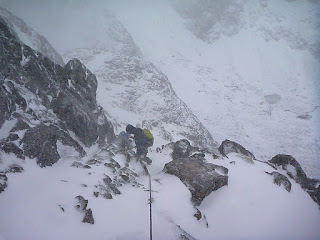 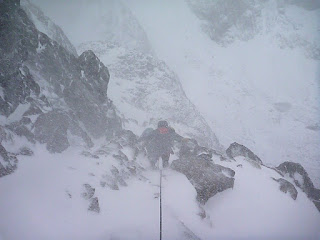 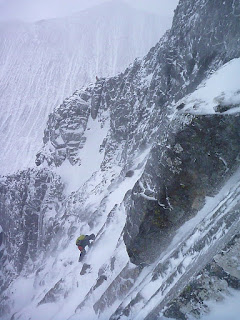 Traversing across to Tower Ridge 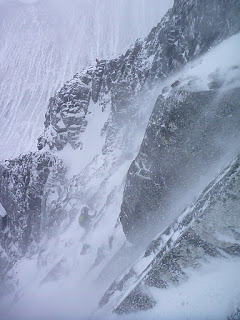 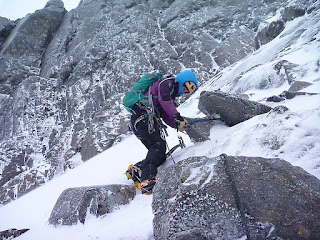 Gill gets a thread 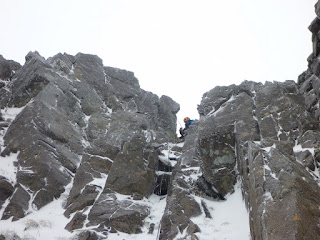 Last pitch onto the Ridge
Posted by Alan at 18:44