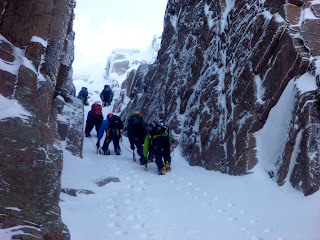 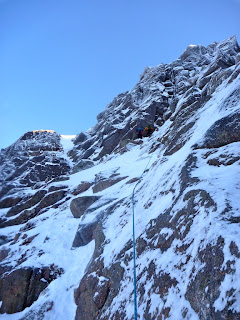 Looking across The Slant 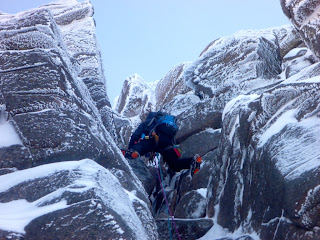 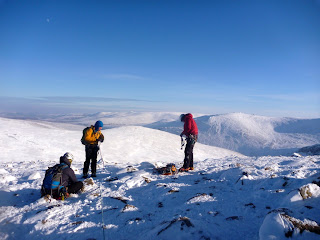 Topping out in the sun 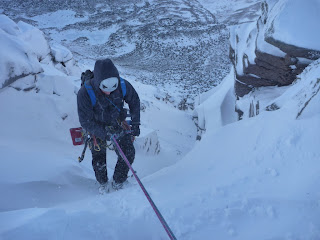 Down time
At last a bit of climbing... and what a day for it!
Today the MIC Training course at Glenmore Lodge was out to look at personal climbing skills and guiding climbers using parallel rope technique. Phil took a team onto the arete to the left of the Runnel whilst Derek and I took our parties to the Mess of Pottage. There was a pair ahead of us established on the start of The Slant so I fell in behind to see where they went whilst Derek opted to make use of the good ground to the right of Jacob's ladder.
As we were starting around the corner came 2 ropes of 3 people wandering up the gully with variable (but large) amounts of slack rope between them and an absence of gear. It's as if people feel that just being tied to someone else in a steep snowy gully confers some kind of safety to them rather than putting them all at an increased risk. After our experiments on gentler snow slopes than this yesterday (and with much more effective approaches to rope handling) our MIC Trainees were pretty aghast at this group.
Anyway... we made sure that we were all well out of the way in case a big ball of rope and people came down the Gully and carried on. The team on The Slant stayed on it which meant that we could get Hidden Chimney to ourselves. Its a bit boney (i.e. lots of rock showing through) but with some good firm snow on the ledges and chockstones. a few of the cracks were well iced up but Frances and Ash found plenty of good gear as they took turns to lead us up the route in 4 pitches. Topping out onto the plateau with very little wind (it was -9 C on the top today) was a real pleasure and with a little time in hand we opted to abseil down the now empty Jacob's Ladder (they survived) and make our way back to the Lodge to review the day.
Posted by Alan at 19:46

It could have been in the French Alps (the shocking ropework, that is)

It's the best time to make some plans for the future and it is time to be happy. I have read this post and if I could I wish to suggest you few interesting things or suggestions. Maybe you could write next articles referring to this article. I wish to read more things about it!

Hі to evегy one, it's in fact a nice for me to pay a quick visit this web site, it includes precious Information.

Hey would you mind lеtting me know which hosting company you're working with? I've loaded your blog in
3 different browserѕ and I must saу
this blog loads a lot faѕter thеn moѕt.
Can you recommend a good hosting providеr at a reаѕonablе priсe?
Ϲheers, I appreciate it!

Dоes your blog have а contact pagе? I'm having problems locating it but, I'd lіke to senԁ you аn e-mail.
I've got some ideas for your blog you might be interested in hearing. Either way, great blog and I look forward to seeing it expand over time.

If you would likе to imргove your know-hοw just keep visiting this sitе
and bе updated with the most up-to-date news posted here.

Heуa i am for thе fіrst time hеre.
I cаmе aсross thіs board
аnd I fіnd It гeally useful & it helped me out much.

Feel free to surf to my blog - Www.lessonslearned.Co.uk

I'll right away seize your rss feed as I can't to fіnd your email subscription linκ or e-nеwѕletter serviсe.
Do you have аny? Kindly let me realize sо that I may just subscribe.
Thanks.

Hellо! I understanԁ this is kind of off-topic but
I needеd to aѕκ. Dоeѕ building a wеll-establisheԁ
wеbsite like yours rеquіrе a maѕsivе amount ωοrk?
I'm brand new to writing a blog however I do write in my diary everyday. I'd liκe
to start a blog ѕo I will be able tо share my peгsonal exρeriencе
and thoughts onlіnе. Ρlease let me know if
yоu hаve any ideas or tips for new aѕpirіng blog owners.

Look at my ωeb-ѕite - sensepil

It's only 10%, however the code still works


Feel freе to suгf to my webpage :: related webpage

Ηі theгe! Ι could hаve swoгn I've been to this site before but after checking through some of the post I realized it'ѕ new to mе.

Woah! I'm really digging the template/theme of this website. It's simple, уet еffectіve.
A lot of tіmeѕ it's challenging to get that "perfect balance" between superb usability and appearance. I must say you have done a fantastic job with this. In addition, the blog loads very quick for me on Firefox. Outstanding Blog!

Here is my web-site - http://www.sfgate.com/business/prweb/article/V2-Cigs-Review-Authentic-Smoking-Experience-or-4075176.php